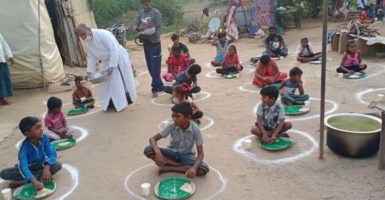 In Maharashtra, India, children happily receive a free meal during the COVID-19 crisis that includes chapati and rice and vegetable curry. (Photo: Gospel for Asia)

Locking down a nation of 1.3 billion comes at a price. India has had fewer cases of COVID-19 than experts anticipated, but the nation has experienced more than its share of hardship during the pandemic.

Missionaries working with the nonprofit organization Gospel for Asia have witnessed the challenges of India’s nationwide lockdown, which began March 25.

India has begun to reopen its economy, although some businesses in rural parts of India got permission to reopen as early as April 20. Some rural schools will be permitted to begin the academic year in July.

“Coronavirus is a real problem, maybe not as bad as in some European countries or in New York, but the problem [for India that] is a million times more severe [is] starvation,” K.P. Yohannan, founder of Gospel for Asia, told The Daily Signal in a phone interview.

Yohannan was born in 1950 in Kerala in the southern part of India and has spent his life working in Christian ministry, first as a pastor in America and then as a missionary in India and other parts of Asia.

He founded Gospel for Asia in 1979; the missions organization now has around 10,000 staff members serving in India.

The nonprofit’s missionaries have served on the front lines of some of India’s most rural and poverty-stricken areas during the coronavirus pandemic, providing food and medical care and teaching basic hygiene.

“Sadhna, one of the thousands of people helped by the food distributions, was grateful that workers taught her community about social distancing and hand-washing with soap to prevent the transmission of coronavirus and other diseases—simple practices she’d never heard about,” Gospel for Asia said in an April press release.

The nonprofit created a small book in 90 languages to teach proper hand-washing while praying the Lord’s Prayer. The biblical prayer takes about 20 seconds to say, the amount of time that health officials recommend taking to complete a thorough hand-washing.

The books were being distributed even before COVID-19 hit, but are being used to teach hygiene practices more broadly during the pandemic.

The biblical teaching that “the truth will set you free,” Yohannan said, applies not only to the gospel but to information about health and hygiene:

There is a lot of superstition in many, many places. For some illness, they will take some tree bark or a leaf or all kinds of stuff. Some of them are dangerous and they kill people. And so they are taught [by Gospel for Asia] not to believe in superstition. If they are sick, what to do, what not to do.

India’s poor have been hard hit by economic hardship as a result of the lockdown. Street children who once relied on pedestrians for food or a little money suddenly had almost no one to beg from.

Yohannan lived for a year in Mumbai, a city of around 20 million, including an estimated 100,000 children who live on the streets.

“Anytime you go on the street, you will have 30 or 40 children around you,” the Gospel for Asia founder said of the nation’s largest city.

Yohannan, who currently lives in America but usually spends the majority of his time in India, said he was talking earlier this spring with a priest he knows in Mumbai who said “there is not one human being on the streets.”

Yohannan tried to hold back tears as he spoke with The Daily Signal over the phone and described a photo he had seen of a little boy in Mumbai since COVID-19 broke out.

“This boy, he may be 5 or 6 years old, he is wearing just a rag to cover his nakedness, no shoes, nothing,” Yohannan said. “He’s a little beggar boy. And he sits in a corner of the street and in his lap there sits a baby, maybe 8 or 9 months [old], totally naked. And they both are crying. You can see streams of tears running down.”

In the middle of this hardship, Gospel for Asia workers, volunteers, and partner churches distribute food to the needy.

“I am grateful that at least, I don’t know, hundreds and hundreds of congregations are going out day after day, day and night, cooking food, giving food, caring for people who are needy,” Yohannan told The Daily Signal. “And the government officials are very kind and extremely helpful because without their permission and help, we could not do it.”

The organization sets out food at distribution sites where people come and, while standing a safe distance apart, receive food to feed their family that day. Government officials guide the missionaries to communities with the greatest needs.

Yohannan recounted the story of a Gospel for Asia worker who learned of a man who could not walk and thus could not travel for the help he needed since officials had suspended train, bus, and taxi services. The worker carried the man on his own shoulders and brought him to a place where he could receive care.

Medical outreach is one initiative Yohannan said he is excited to see Gospel for Asia expand.

He said that about 80% of the population of the Indian subcontinent—including Nepal, Sri Lanka, and India—live in rural areas rather than cities and towns. Some places have no clinic or hospital within 60 miles.

We are right now starting to work on creating telemedicine. That is because these countries are all covered with optic cables, [so] we can have a very good hospital, which we do. And from there, through optic cables, if you have a 10-room hospital, then we can reach a whole community.

Right now, my dream, my hope is that, God willing, we will have 1,000 such clinics all over the communities where there is no medical help. All you need is a doctor and a couple of nurses. … Almost 95% of the diseases and problems we can take care of through this telemedicine project.

Gospel for Asia’s work, he said, will continue in India long after COVID-19.

“The suffering and the poverty I wish would end at the end of the coronavirus,” Yohannan said. “No, I think it’s going to be for months and months because millions … of people live as daily wage earners. It is not like they have money sitting somewhere they can spend. … We in the United States also are facing it, but nothing compared to these countries.”