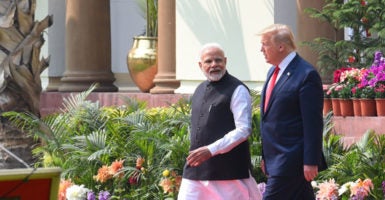 India’s reported number of coronavirus cases has been surprisingly low, given the country’s huge and highly dense population.

Experts think there are a number of factors that could be contributing to the low infection rates, but as a Heritage Foundation colleague summed up concisely: “Unfortunately, we don’t have a solid answer.”

When it comes to how best to realize India’s true economic potential, however, we have a pretty solid idea: Increase economic freedom.

According to The Heritage Foundation’s annual Index of Economic Freedom, the Indian economy has languished in the lower tier of economic freedom for nearly two decades. The 2020 edition of the index notes that although India has implemented measures to enhance its regulatory efficiency, the world’s second-most populous economy remains “mostly unfree.”

Regrettably, India’s economy has been beleaguered by poor performance, exacerbated by poor policy choices and sluggish reforms. Corruption, a lack of competitiveness, and a reform-resistant political system have neutered what was once considered Asia’s next “tiger” economy.

The country’s prescription should be higher regulatory efficiency and greater market openness, rather than coercive practices, such as tariffs and taxes.

Despite the country’s notable economic expansion of about 7.5% annually over the past five years, delays in economic reforms to upgrade the market system and make the economy more productive have spooked domestic and foreign investors.

In a series of recent announcements, the government of Indian Prime Minister Narendra Modi made a welcome move to deal with the economic fallout from the ongoing coronavirus pandemic and revitalize the country’s stalling economy.

In particular, the government highlighted its intention to pursue privatization of state-run companies in nonstrategic sectors.

Indeed, India has been trying to divest parts of state-run companies in a number of sectors, ranging from aviation to power, but it has confronted feeble investor confidence. That’s a problem.

India’s population is quite young, with less than 10% of the population above 80 and nearly 75% below the age of 40. Generating more jobs and greater economic opportunities is a critical and urgent task.

Increasing investment is the only way to make that happen, and the proven path to investor confidence is greater economic freedom.

President Donald Trump might have gotten a glimpse of two Indias on his late February visit to the country; namely, the modern, well-educated society that now boasts a growing middle class, but also a country with lingering poverty and a dysfunctional, inefficient entrepreneurial environment.

Narrowing that dichotomy through free-market policies is vital to India’s future.

India has great potential, including a huge young and innovative workforce. The country could be so much more if it were to move toward greater economic freedom decisively without any further delay.