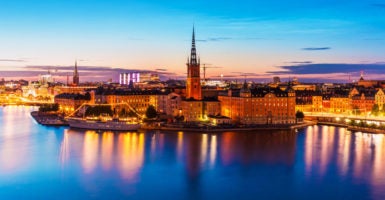 Sweden saw an alarming increase in the number of sexual assaults in 2017. (Photo: Scanrail/Getty Images)

When Swedes go to the polls in September, it will be with a backdrop of increasing crime and renewed concern over Russian aggression.

In January, a man at a train station on the outskirts of Stockholm died after picking up a discarded grenade, which he mistook for a toy. In August 2016, an 8-year-old British boy was killed in a grenade attack on an apartment in the city of Gothenburg while visiting family members.

Grenade attacks are perhaps the most striking example of increasing crime in Sweden. The number of grenade attacks in Sweden has risen dramatically, jumping from eight in 2014 to a staggering 52 in 2016.

Grenade attacks are likely linked with gang feuds and organized crime, and often target police. For instance, in November, a man threw a grenade at a group of police officers in the Swedish city of Uppsala.

Grenade attacks are not the only dangers facing Swedish law enforcement. This past October, a police station in southern Sweden was attacked with fireworks and cobblestones. On the same night, a police officer’s home in the town of Vasteras, near Stockholm, was shot at with 12 bullets.

These attacks against Swedish law enforcement are hardly the only examples. As such, it is not surprising that a recent survey carried out by a Swedish police union recently found that 70 percent of police officers feel more vulnerable now than they did two years ago.

Seeking to cut down on grenade attacks, beginning in July 2017, Sweden increased the penalty for the carrying and illicit use of hand grenades. In December, the Swedish government proposed a three-month amnesty beginning in October 2018 in an attempt to get grenades off Swedish streets, although the proposal has yet to be adopted in Parliament.

Gang violence in Sweden has gotten so bad that, in January, Swedish Prime Minister Stefan Lofven raised the possibility of deploying the army to quash it.

“It would not be my first option to bring in the military, but I am prepared to do whatever is necessary to make sure that serious, organized crime is stamped out,” he said.

According to Sweden’s National Council for Crime Prevention, reported crimes increased by 4,010 in 2017 compared with 2016. While Sweden saw decreased activity in crime such as theft, other crimes—including sexual assaults—saw significant increases.

In July 2017, Sweden’s largest music festival announced that owing to sexual assaults, it would cancel its 2018 festival.

While it is important to recognize the Swedish Crime Survey covers only reported crimes, 2017 saw a troubling 10 percent increase in the number of reported rapes in Sweden, with 7,230 reported in 2017, 663 more than in 2016.

The Swedish government points to a broadening definition of rape and to potential increases in reporting percentage for the rise. This explanation is the subject of debate in Sweden. Many counter that sex assaults have indeed risen in the country, and that reporting does not explain the rise, but that “open discussion of this subject is thwarted by taboos.”

A rise in crime in Sweden is certain to remain a top issue during the electoral campaign. A poll conducted last year by the Swedish polling company Sifo found that crime was the issue Swedes were most worried about, a reality that will keep the issue on the table for fall elections.

In those elections, Lofven, a Social Democrat who has been in office since 2014, heading a coalition government with the Green Party, will seek re-election.

The most recent party-preference survey from Statistics Sweden forecasts the governing coalition garnering 36.4 percent of the vote, behind the 39.2 percent forecast for a coalition of conservative parties headed by the Moderate Party.

The survey forecasts the populist Sweden Democrats receiving 14.8 percent of the vote and the Left Party (formerly the Left Party-Communists) at 7 percent.

Sweden has undergone major changes since the last parliamentary election in 2014.

A debate about migration continues in the country on the heels of an April 2017 terrorist attack in Stockholm, which killed five people. The perpetrator of the terrorist attack, an Uzbek man, had been denied asylum in June 2016. When police sought to deport him in February 2017, he had gone underground.

It recently came to light that the Stockholm terrorist was in contact with senior Tajik members of Daesh, or the so-called Islamic State, both before and after he drove a truck into crowds in central Stockholm.

Sweden has been heavily affected by the migrant crisis. A country of about 10 million people, roughly the same population as the state of North Carolina, Sweden received 163,000 asylum requests in 2015, during the height of the migrant crisis.

In 2017, Sweden granted 135,459 residence permits, with the largest number of permits (35.5 percent) being granted for family reunification. Today, Sweden has taken in more migrants per capita than any other nation in Europe.

The effects of the migrant crisis in Sweden have stretched public finances, and led the Lofven government to pare back some benefits to newly arrived migrants. Migrants in Sweden often have difficulty entering the labor market, and unemployment rates are high for immigrants to Sweden, even after nearly a decade of living in the country.

September’s elections will also take place under the backdrop of increasing concerns over Russian aggression. As described in The Heritage Foundation’s Index of U.S. Military Strength, the turning point can likely be traced to 2013:

In March 2013, two Russian bombers and four fighter jets took off from St. Petersburg and carried out a mock strike on targets in the Stockholm region. Swedish experts have assessed that this mock attack in fact simulated a nuclear strike against two targets in Sweden.

The Swedish air force did not react, as it was on low alert during the Easter break. Instead, NATO scrambled two Danish jets from a base in Lithuania to intercept the Russian planes.

In 2014, Sweden sought unsuccessfully to locate a foreign submarine thought to be Russian lurking in its territorial waters. The fallout of these security incidents, along with Russia’s 2014 invasion of Ukraine, has been a Sweden that has once again begun to invest in defense.

In December, Sweden announced the creation of its first new regiment (to be stationed on Gotland) since World War II. Defense Minister Peter Hultqvist stated the decision to create the regiment was a result of the “worsened security situation” in the region.

The deteriorating security situation has also led Sweden to invest $1 billion in additional defense spending over the next three years.

Russian aggression has reinvigorated public debate in Sweden over NATO membership. A 2017 Pew poll found 47 percent of Swedes in favor of NATO membership, with 39 percent opposed, and 14 percent undecided.

The current center-left coalition government has sought increasingly close ties with NATO, but it has stopped short of supporting Swedish membership in the alliance. The four parties of the center-right opposition—the Centre, Christian Democrat, Liberal, and Moderate parties—all support Swedish NATO membership.

Last June, Russian President Vladimir Putin threatened Sweden, saying that if it were to join NATO, “We will interpret that as an additional threat for Russia, and we will think about how to eliminate this threat.”

Perhaps it comes as no surprise then that Swedish authorities are reportedly planning to send civil defense pamphlets to nearly 5 million households.

The threat from Russia includes propaganda and disinformation, and is a particular concern with the upcoming election.

Last month, Sweden announced the creation of a new agency to counter Russian propaganda. In announcing plans for the new entity, Lofven stated it should augment the existing work already undertaken by Sweden’s intelligence and security services.

With less than seven months to go before parliamentary elections in Sweden, polling indicates an outcome too close to call.

While voters will weigh economic policies, including taxes and job security in their decision-making, security concerns—including the increasing crime and concerns over Russia—might be poised to play an important role this year in the run-up to the election, and potentially affect its outcome.