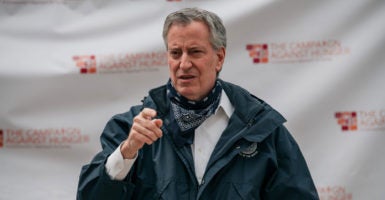 Mayor Bill de Blasio showed just how intolerant he is of deeply religious New Yorkers and how much he disregards the Constitution's First Amendment protections for all. Pictured: de Blasio, with a bandana around his neck, speaks April 14 at a food shelf organized by the Campaign Against Hunger in Brooklyn. (Photo: Scott Heins/Getty Images)

“My message to the Jewish community, and all communities, is this simple: the time for warnings has passed,” de Blasio said Tuesday night on Twitter. “I have instructed the NYPD to proceed immediately to summons or even arrest those who gather in large groups. This is about stopping this disease and saving lives. Period.”

In an appalling display of incompetence and authoritarian progressive politics that some might see as anti-Semitism, de Blasio showed just how intolerant he is of deeply religious New Yorkers and how much he disregards the Constitution’s First Amendment protections for all.

New York City, of course, has been the epicenter of the COVID-19 pandemic, with more than 164,000 confirmed cases and about 13,000 deaths at this writing. The need for testing, social distancing, masks, and other personal protective equipment is paramount and will continue to be until the new coronavirus passes through. This is obvious and a real concern.

However, in encouraging or even mandating efforts to squelch the spread of COVID-19, the disease caused by the virus, many local and state government officials have displayed an ugly, even surprising, authoritarian bent. This is particularly so as it relates to Americans of faith.

This could be because deeply religious Americans tend to gather weekly or even bi-weekly more than other groups. Still, that doesn’t explain the way government officials have targeted religious communities in executive orders—and tweets such as de Blasio’s—above parents, businesspeople, or other groups that gather regularly.

Many on the political right flamed de Blasio’s tweet, of course, although the left, unsurprisingly, brushed it off and made allowances for the Democratic mayor.

The New York Post scolded de Blasio for a “new low: blaming the Jews,” and The Wall Street Journal also took issue with the tweet. Others stopped short of calling out the mayor for targeting Jews or his explicit encouragement to law enforcement to make good on his threat.

Buzzfeed observed that even though the mayor’s tweet was “dangerous,” de Blasio isn’t “an anti-Semite,” and Daily Beast argued that de Blasio had been an ally to the Jewish community and he went wrong only because he painted Jews with too broad of a brush. (Yeah, that’s it, de Blasio just went too far when he blasted Jews. He wasn’t specific enough. That was his problem.)

Here’s the issue: The right to worship or mourn freely according to one’s religion isn’t a progressive or a conservative concept. It’s an American ideal written into the Constitution for all.

Clearly it’s difficult to strike a careful balance between the constitutional right to freely exercise one’s religion, including gathering to mourn over the dead, and the fierce desire to keep everyone separate and clean because that’s how we’ve come to realize we can slow the spread of COVID-19.

I grant that these two beliefs sometimes clash. But that doesn’t mean government officials can unleash unconstitutional ideas and actions that smack of anti-Semitism in one fell swoop.

To make matters worse, de Blasio exacerbated his problem with an “apology” Wednesday that seemed disingenuous as well as too little too late. Does he presume his constituents—particularly conservative, religious people—to be ignorant and easily fooled?

A targeted tweet such as de Blasio’s does not just represent a moment of exasperation or a hot flash of temper; it suggests bigotry and a desire to co-opt a season where government officials can mandate what citizens do with their time and their bodies and burn it into the minds of the deeply religious. No, thank you, Mr. Mayor.

In fact, there is no reality where a tweet like de Blasio’s can be excused out of a desire to keep people safe, particularly because he expressly threatened Jews who are mourning their dead with the hammer of law enforcement should they fail to heed his disgusting warnings.

You know you’re an angry progressive when, in one tweet, you’re willing to target Jews and force your own police force to violate the Constitution these officers swore to uphold.

The threatened use of the New York Police Department is so appalling that a legal organization in Texas, First Liberty Institute, said it “will represent, for free, any member of the NYPD who is punished by the mayor’s office for refusing to follow Mayor de Blasio’s unlawful and immoral order.”

Although the coronavirus pandemic has required unusual, specific precautions, it does not mean that local government or law enforcement, no matter how well-meaning, can target citizens for their religious beliefs.

It is an anti-American sentiment, rooted in the very thing that brought the Pilgrims to the New World centuries ago and sparked the great American experiment in the first place.

However complex precautionary measures to curb COVID-19 have turned out to be, no religious group should be targeted for its deeply held beliefs. Any government official who uses his power in crisis to take such action deserves to be called out for it.