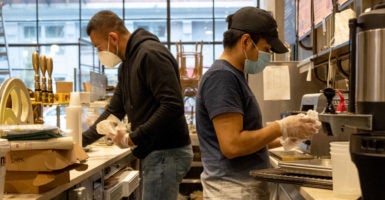 Hit hardest in April by COVID-19 was the leisure and hospitality category, which lost 7.7 million jobs, with 5.5 million of them in the food services and restaurants. Pictured: In New York City, restaurant employees clean Blue Stripes Cacao Shop on Wednesday in preparation for reopening for takeaway and delivery orders after being closed for over a month. (Photo: Alexi Rosenfeld/Getty Images)

The U.S. economy lost 20.5 million jobs in April as the devastation from COVID-19 hit new highs Friday in the monthly jobs report from the U.S. Bureau of Labor and Statistics.

The report also shows that the nation’s unemployment rate soared to highs not seen since the World War II era, climbing from 4.4% to 14.7%.

Given recent unemployment filings, my colleagues at The Heritage Foundation estimate that the unemployment rate actually is at least 18% and quickly approaching 20%.

The jobless rates for all of these groups, with the exception of African Americans, register record highs.

In addition, the U-6 unemployment rate, which measures both the unemployed who are looking actively for a job and those who are unemployed but not actively seeking work, showed a massive jump from 8.7% to 22.8%.

The labor force participation rate decreased by 2.5 percentage points over the month to 60.2%, the lowest rate in 47 years.

So where did the job losses happen?

The largest decline happened in the leisure and hospitality category, which shed a whopping 7.7 million jobs. A total of 5.5 million of those jobs are in the food service and restaurant category.

Other notable losses include:

Education and health services: 2.5 million (243,000 of these jobs were in offices of physicians)

In April, average hourly earnings increased by $1.34 to $30.01, representing a 7.9% increase from this point last year. The jump in wages is likely because job cuts hit low-wage workers harder, as higher earners typically are able to work from home.

One potential bit of good news is that out of the 20.5 million jobs lost in April, 18.1 million of them (88%) came from workers who were temporarily laid off.

So the question remains: How long will these layoffs remain temporary before moving to permanent layoffs? The answer depends on how long we continue to keep large portions of the economy closed.

According to a chilling new survey conducted by the Society for Human Resource Management, nearly half of all small business owners project they can keep their business going for six months before having to close their doors permanently.

If we want to stop these projections from becoming reality, and want to keep temporary layoffs from becoming permanent, we need a locally driven, data-informed reopening of society so we can begin getting Americans safely back to work.

To do this, we need to be sure that policymakers create an atmosphere that encourages work, not incentivizes unemployment.

We need to fix the portion of the new CARES Act that gives unemployed Americans an additional $600 per week in unemployment insurance benefits, which in many cases pays them more to stay at home than going back to work would.

To help guide policymakers around the nation on reopening, The Heritage Foundation assembled the National Coronavirus Recovery Commission. The goal:  Save lives, but also livelihoods. The commission so far has put forward 179 recommendations that strike a prudent balance between the two.

As we begin to see states move closer to reopening, it is important we provide business owners with policies and procedures that help welcome back their employees.

To see these high unemployment numbers fall, we must immediately start the balancing act between lives and livelihoods.