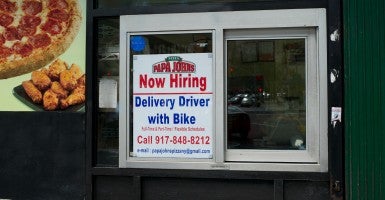 The participation rate of 25-54 year olds remained unchanged, while their unemployment rate dropped 0.2 points to 4.6 percent. The job market continued to improve for Americans looking for work.

Other figures in the payroll survey gave more muted cause for optimism. Revisions to the January survey showed employers created 18,000 fewer jobs than previously estimated. Average workweeks remained flat at 34.6 hours a week for the fifth straight month. Average hourly earnings rose just 3 cents to $24.78/hour. Over the past year nominal hourly earnings have risen 2.0 percent.

Many economic commentators have pointed out that wage growth has remained low over the past year, even though hiring has picked up and unemployment has fallen. They view this as a puzzling disconnect – greater demand for labor should raise wages as well as the number of workers hired. However, the hiring gains may in part reflect increased labor supply – not just increased demand. Increased labor supply increases employment while putting downward pressure on wages. Economists need to do more research to determine whether supply or demand changes have driven the recent hiring gains.

On the whole the economy continued to grow at a healthy pace in February.