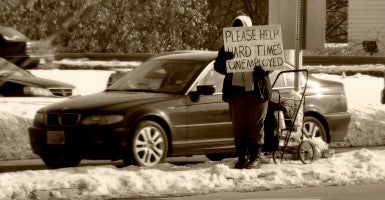 It is well-established in theory and practice that unemployment insurance increases unemployment. But by how much?

A new working paper by well-known labor economists found that canceling the unemployment benefit extension a year ago caused an “employment miracle” as large as 1.8 million net new jobs in 2014. Although improvements to the methodology and data will probably shrink the effect well below the eye-popping 1.8 million job estimate, there is no doubt that macroeconomic dynamics are important to understanding the cost of unemployment insurance.

Unemployment insurance represents a trade-off: it eases the privation and uncertainty of job loss, but it slows economic recoveries and lengthens individual unemployment spells, which can contribute to skill loss and depression.

So did the cancellation of extended unemployment benefits at the end of 2013 lead to strong job growth in 2014? Certainly 2014 was a very good year for the labor market. Job vacancies increased 19 percent, compared to 7 percent in 2013 and 0 percent in 2012. Employment growth was much better, too. The share of 25- to 54-year-olds employed grew 0.9 percentage point in the last year, which is almost as much as it grew in the previous five years combined.

Despite the promising macro statistics, the new paper struggles to accurately measure the impact of unemployment insurance. When Dean Baker tried to replicate the authors’ description of state employment growth using a different data source, he found the opposite result. The disagreement among data sources is a reason to avoid relying on the 1.8 million jobs statistic.

Another concern is that the authors’ methodology relies on comparing neighboring counties across state lines. The comparison relies on the idea that neighboring counties have similar underlying economic trends. But it also relies on not many workers crossing the border for jobs. If it is common to work across state lines, the experiment is muddied by the shared labor market. If cross-border work is rare, then why should we suppose the counties share underlying trends?

As research continues on the macroeconomic costs of unemployment insurance, policymakers will be better equipped to quantify the trade-offs between softening a recession and shortening it.