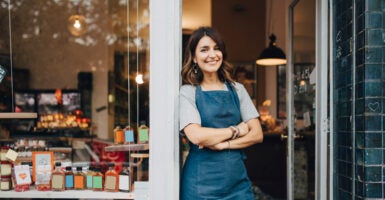 August was the fourth straight month that the economy added jobs and the unemployment rate fell despite the lingering COVID-19 pandemic, again upsetting experts’ predictions as the economy continued to show positive signs of strong recovery. (Photo: Maskot/Getty Images)

The unemployment rate fell by 1.8 percentage points to 8.4% as the economy added 1.4 million jobs in August, the Bureau of Labor Statistics reported Friday.

It was the fourth straight month that the economy added jobs and the unemployment rate fell despite the lingering COVID-19 pandemic, again upsetting experts’ predictions as the economy continued to show positive signs of strong recovery.

The August unemployment rate of 8.4% reflects a drop of 6.3 percentage points from a high of 14.7% in April and a whopping 10.6 million new and regained jobs over the four months.

The number of Americans who were temporarily laid off fell by 3.1 million, marking a 33% decline from July. Moreover, August saw a drop of 7.1 million, or 23%, in the number of those whose work status was affected because their employer had closed or lost business due to the pandemic.

The labor force participation rate saw a healthy increase, from 61.4% in July to 61.7%, as almost 1 million workers joined the labor force in August. This shows that not only are more of the unemployed going back to work, but some who stopped looking for jobs are beginning to seek and find new work opportunities.

However, the number of permanent job losses increased by 534,000 to 3.4 million; this measure has risen by 2.1 million since February.

Given the big changes that the new coronavirus has brought to the employment situation in the U.S., the Bureau of Labor Statistics conducted a supplemental survey to illustrate showing some of the changes we have seen.

For instance, in August, 24.3% of those employed teleworked, down slightly from 26.4% in July.

In addition, 24.2 million Americans reported that they experienced fewer hours or were unable to work in August because their employer had closed or lost business because of to the pandemic. Although still high, this marks a 23% decline from 31.3 million affected workers in July.

The data also show that about 5.2 million who weren’t in the labor force in August were prevented from looking for work by the pandemic, down from 6.5 million in July.

Here are the biggest changes by employment sector:

Although this jobs report has many encouraging aspects, and it’s becoming clear that recovery is well underway, my Heritage Foundation colleague, Rachel Greszler, reminds us that states and local governments must take responsibility for safely reopening.

Greszler says that unemployment is declining, but some counties and states are faring much better than others. In July (when the national unemployment rate was 10.2%), the unemployment rate in seven states exceeded 13%, and the rate in nine states was below 7%.

Several factors contributed to these numbers, but the overall trend shows that states with lower unemployment have been those that were quicker to reopen during the pandemic.

It’s common sense that if you keep business closed, people can’t work. If schools are closed, parents have a much harder time going back to work. If unemployment benefits pay more than paychecks, people will have less motivation to return to work.

To continue this strong recovery and prevent temporary job losses from becoming permanent losses, it is incumbent on the government not to stand in the way of employers, workers, parents, and children.

We continue to see that a strong recovery from COVID-19 is possible. Federal lawmakers should resist the temptation to put taxpayers on the hook for ineffective stimulus spending. State and local governments should focus on allowing individuals, businesses, and schools to safely resume activities while not restricting income opportunities for workers.