‘Panic in the Streets’: Life Imitates Art With Coronavirus 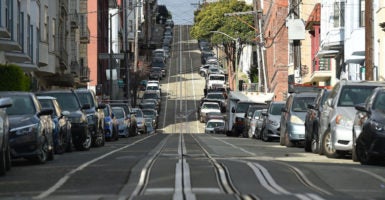 In 1950, the great Hollywood director Elia Kazan produced a movie, “Panic in the Streets,” about a desperate attempt to stop a pandemic (pneumonic plague, the pulmonary version of the bubonic plague, or “Black Death”) from spreading out of New Orleans and across the United States.

In the film, there’s a cover-up to prevent “panic in the streets,” as opposed to the complete disclosure that has characterized the current pandemic.

Kazan—who won two Academy Awards as a director, as well as a lifetime achievement award, and produced classics like “On the Waterfront” and “A Streetcar Named Desire”—was reviled by Hollywood late in his career after he revealed what he knew about communists in Tinseltown who had worked with the Kremlin and Josef Stalin’s murderous dictatorship to undermine America.

His 1950 film was filmed entirely on the streets of New Orleans. Actor Richard Widmark played an officer in the U.S. Public Health Service who discovers that a murder victim, who experienced flu-like symptoms before he was killed by a local gangster, had bubonic plague.

Widmark has everyone who was in contact with the body vaccinated, but he has trouble persuading city elected and law enforcement officials that there’s a real problem. He finally persuades them that they have only 48 hours to find everyone the victim was in contact with to prevent an epidemic.

However, Widmark also persuades them they need to keep this problem secret, because otherwise there will be mass panic, which will cause residents to flee the city and spread the disease throughout the nation. He even has a reporter who finds out what’s going on thrown in jail to prevent disclosure.

It turns out the victim was an illegal alien smuggled into the city by ship. After a long, convoluted series of events, Widmark is able to find everyone who was exposed, and the problem is resolved without the plague spreading.

In the real world, China’s totalitarian government unwittingly copied what happened in the movie and initially tried to suppress information about the virus and its spread, which resulted in it migrating to all parts of the world.

As Washington Post columnist Marc Thiessen has pointed out, totalitarian regimes lie to themselves and then lie to the world to cover up the truth, even when millions of lives are at stake.

Public health authorities know that transparency and information is the best way to beat a pandemic.

Of course, in the movie, there was already a vaccine for bubonic plague that was used to inoculate everyone exposed and thus prevent the spread of the disease.

We don’t have that today, although there are several laboratories furiously working on developing one, and fortunately, the fatality rate for COVID-19, the disease caused by the novel coronavirus, is at nowhere near the fatality rate from the Black Death in medieval Europe or even the influenza epidemic of 1918.

Also, President Donald Trump has taken necessary steps, such as stopping travel into the country from numerous other nations heavily hit by the virus to prevent more exposure in the U.S.

He and  health officials, governors, mayors, and other government officials have held numerous press conferences to educate the public about how to deal with this issue, including social distancing to prevent its spread.

Many corporate and government offices, small businesses, restaurants, and schools are closed, and our hospitals and medical clinics have been gearing up to treat individuals who have become infected.

So far, we have not seen a panic, as Widmark’s character feared would happen in the movie, other than the run we have seen on some grocery stores for supplies.

“Panic in the Streets” was released six years after Congress passed the Public Health Service Act in 1944. Under one provision of that law, 42 U.S.C. § 264, the executive branch has the ability—as Trump has done—to restrict entry from foreign countries and even across state lines to prevent “the introduction, transmission, or spread” of communicable diseases.

That includes the authority to “detain” and medically examine individuals who are infected or “a probable source of infection.” Such individuals can “be detained for such time and in such manner as may be reasonably necessary.”

States also have authority under their general police powers and under specific state laws that give them the ability to control the spread of disease within their borders. Virginia, for example, authorizes quarantine and isolation orders, which can be enforced by law enforcement agencies and subject the violator to civil and criminal penalties under §32.1-48.014 of the Virginia Code.

The bottom line is that states and the federal government have the power to isolate and quarantine individuals to prevent the spread of the coronavirus if and when that becomes necessary, something that wasn’t really covered in the Hollywood movie.

Seventy years ago, Kazan imagined what might happen if his adopted homeland was threatened with a dangerous epidemic. The reality we are facing today is quite different, but fortunately for us—so far, at least—there hasn’t been any panic in the streets of America.