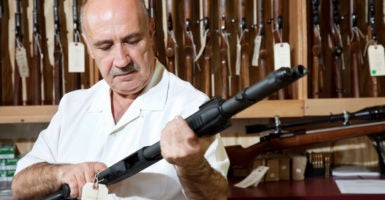 Legislation called the TAPS Act is about taking strategies that work at the federal level to prevent targeted mass violence and retooling them in a sensible way for state and local entities. (Photo: IPGGutenbergUKLtd/Getty Images)

Too many lawmakers today cannot fathom a world where “keeping Americans safe from violence” means anything other than imposing stringent gun control measures.

That makes it all the more important to highlight legislation that thinks outside the box of gun control and that gets public safety right without infringing on the rights of law-abiding Americans.

Meet the Threat Assessment, Prevention, and Safety Act of 2019 (TAPS Act), a bill pending in the House of Representatives that could help communities prevent acts of targeted and mass public violence.

The TAPS Act doesn’t seek to do this by creating new laws or expanding the authority of law enforcement. Rather, the TAPS Act would better equip state and local law enforcement, educators, and schools to assess and handle the threatening scenarios they already deal with on a regular basis.

At its core, the legislation is about taking the same strategies that we know work at a federal level to prevent targeted mass violence, and retooling them in a way that makes sense for state and local entities.

It would create a task force charged with developing a national strategy to combat acts of targeted violence, such as terrorist attacks and mass shootings.

The task force wouldn’t have the authority to create or recommend new laws, but would review how federal, state, and local agencies currently collaborate on potential threats and recommend best practices for enhancing that collaboration.

Behavioral threat assessment is exactly what it sounds like—a system for recognizing, evaluating, and responding to potential threats.

How do we ensure that we don’t miss signs that someone is potentially dangerous? How do we properly calculate the level of potential danger, so that we don’t either overreact or underreact? Who should take what steps to intervene, based on the facts as we know them?

These are all very important questions, the answers to which can often mean the difference between successful intervention and a high-profile tragedy.

Many federal agencies have become experts with behavioral threat assessment, and regularly use it for purposes of national security. For example, the Secret Service may use it to determine whether someone who posts a social media comment about killing the president is merely “joking” or instead poses a genuine threat.

Similarly, the FBI may use it to assess whether someone researching pipe bombs is doing a science project, plotting an imminent terrorist attack, or has an unhealthy obsession with explosives that may become a serious threat to public safety at some point down the road.

That can present major problems when it comes to protecting our communities. Even though state and local police aren’t often on the front lines of the fight against domestic terrorism, they routinely interact with individuals who may or may not pose threats of other types of targeted violence, such as school shootings or nonideologically motivated mass public shootings.

The same is true for educators and school officials, who (for better or worse) have some of the most extensive and sustained personal interactions with American youths.

Consider the following scenarios likely to be encountered by cops and teachers across the country today:

We should absolutely want law enforcement officers and educators in these scenarios to have the best idea possible of how to analyze these potential or alleged threats—and know what actions to take.

Perhaps just as importantly, training in behavioral threat assessment would help these individuals know which actions not to take.

When law enforcement officers and school officials are properly able to distinguish true threats from nonthreats, they are less likely to pursue inappropriate interventions that wrongly infringe on the rights of people who aren’t dangerous.

Finally, the TAPS Act is not a “red flag law.” That term can encompass a wide variety of laws, but refers generally to any law that allows a person’s firearms to be seized and his or her Second Amendment rights temporarily revoked after a court determines the person to be dangerous to self or others.

Such laws can be highly controversial, even when well-crafted to afford adequate due process.

The TAPS Act does not authorize or fund these types of laws at any level of government. The legislation would, however, ensure that—regardless of whatever laws already exist at a state or local level—law enforcement officers and educators can make better decisions about potential threats to public safety.

That’s the kind of public safety bill that America actually needs in the wake of tragedies—not extreme gun control measures that largely punish law-abiding, nondangerous citizens, but training that empowers us to identify and stop specific threats before they turn tragic.