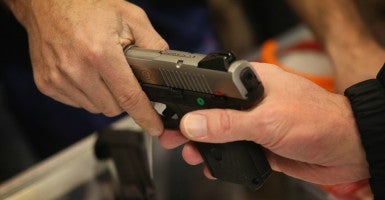 The SHOT Show — Shooting, Hunting, and Outdoor Trade Show — is the world’s largest gun show. Held annually in Las Vegas, it’s intended for those in the trade, not the general public. Walking its almost 16 miles of booths is a near-marathon feat of endurance, and every mile exhibits more firepower than all the armies of the ancient world combined.

But despite their formidable powers of self-defense, members of the firearms industry are a nervous lot — and not without reason. Two years ago, after Newtown and the 2012 election, the show anxiously awaited President Obama’s executive actions on gun control. A year ago, the U.N. Arms Trade Treaty (ATT), on which I’ve written copiously, promised nothing but trouble. This year, executive actions were back on the agenda: with the midterm elections now past, the industry fears there’s nothing to stop the president from indulging his anti-firearms instincts.

In one sense, Obama has been very, very good for the U.S. firearms industry. Far from controlling guns, his outspoken anti-firearms advocacy has made him the industry’s top salesman. In 2012, the latest year for which statistics are available, almost 8.6 million firearms were manufactured in the U.S., bettering 2011’s total of 6.6 million, which was itself a record. Imports also hit new highs in 2013, and activity in the more exotic realm of National Firearms Act firearms — automatics and certain other types of weapons and attachments — has been at record levels since 2011. Indeed, one reason for nerves at the show is simply the general awareness that the good times occasioned by worries about Obama can’t last forever.

But there’s more to the industry’s concerns than the fear that the punch bowl might soon disappear, if indeed sales haven’t already peaked. And in spite of the boost Obama’s given their sales, many would rather have a president who was less obviously hostile to their industry and their livelihoods. Johanna Reeves, executive director of the F.A.I.R. Trade Group – the Firearms Import/Export Roundtable – expressed it this way: The Obama administration, and the ATF in particular, are “pushing the envelope and testing the boundaries to see how far they can go.” The ATT and other U.N. programs play into this. As Reeves and a colleague put it in a recent piece on the treaty, their concern is that the “legitimate trade and industry will bear the brunt of ‘norms’ that will develop out of these instruments, norms that will further restrict the ability of U.S. firms to import and export firearms and ammunition.” Indeed, the worries stem fundamentally from the trade’s realization that the gun-control battle is moving from the national political level, where the Second Amendment has rarely looked healthier, to the international, national administrative, and state and local levels. In other words, the challenges are becoming more diffuse and harder to combat — or even, in the case of administrative restrictions, to follow.

Having lost the battle for public support, the gun-control movement is changing. As Frontline put it in December, they’ve given up on the term “gun control,” and “talk instead about ‘gun safety,’ ‘commonsense gun laws,’ or more simply, ‘keeping guns out of the wrong hands.’” Shannon Watts, the founder of Moms Demand Action, explains the shift by noting that “gun control” was a “phrase that was pointed to as divisive, or didn’t have the right tone or implications.”

But gun-control supporters aren’t merely relying on fooling people with new language. From import bans to action through the Centers for Disease Control, the Obama administration, with the aid of that presidential pen that he loves so much, is doing what it can, where it can. Operation Choke Point, which targets gun sellers — among others — by attacking their ability to keep a bank account open, has achieved a certain level of notoriety, but other moves are farther under the radar, especially for a public that is more concerned with developments that affect individual consumers (and thus raise Second Amendment concerns) than with ones that affect the firearms industry. The latest such change came earlier this month, when the ATF issued a new ruling (ATF Rul. 2015–1) that redefines what it means to be a manufacturer of firearms, thereby bringing a new swath of the industry under its control.

Many see this as a late-arriving effort by the ATF to win a legally dubious, ongoing case against Ares Armor, a California-based concern. It’s certainly an example of the government’s changing the rules of the game to its benefit: Only last year, I was standing in the hallways of the show listening as a high-ranking ATF official explained to a trade lawyer that a bent piece of metal with a hole in it wasn’t legally a firearm, and therefore was not subject to ATF control. Now, all of a sudden, that piece of metal requires a firearm manufacturer’s license, if ATF thinks it can be converted into a firearm.

Across the U.S., the race is already on to design firearms that comply with various state laws. Further administrative pressure and new state and local regulations are likely to fragment the industry even further. The result of that, ironically, will be to make the gun-buying public even more anxious to get their hands on legal firearms. The Obama administration may not have done its last unintentional favor for the industry yet.

The most cheerful people I met at the show were representatives of the Canadian National Firearms Association (NFA). Though concerned that the Royal Canadian Mounted Police (RCMP) remain obdurate, they believe opinion in Canada is moving their way. Social media have been a boon to the NFA, helping to drive a level of activist involvement in firearms that’s new to Canada. The fact that 40,000 Canadians served in Afghanistan — and many also play the online shooter Call of Duty — has grown the activist base. The Harper government’s decision to terminate Canada’s catastrophically expensive (nearly $3 billion) and useless long-gun registry was a milestone, and the NFA believes the government will stand by its refusal to sign the ATT, which it rightly views as an attack on Canadian sovereignty. All’s not perfect north of the border: The NFA is fighting an RCMP-led reclassification effort that’s broadly similar to the ATF’s new rule, and the impending Canadian election occasions more concerns. But all in all, the Harper government shows that, while having a good leader isn’t a cure-all, it’s an excellent place to start.

The problem is that, as Reeves put it, it’s only a start. Much of the action on gun control now is almost apolitical — it’s buried so deep in the administrative apparatus that only the most motivated political appointee will be able to root it out. So while a lot of SHOT Show attendees eagerly await the arrival of January 2019, they may be disappointed, no matter what the outcome of the next election.

And one of the NFA representatives had a final word of warning: In the RCMP’s eyes, the alternative to gun registration inside Canada was “gun control at the border.” No one questions Canada’s right to control its border. But as the import-heavy American market and the ATT both show, it’s impossible to separate the legal international trade in firearms from the domestic firearms market, and thus from the Obama administration’s and the new-look gun-control movement’s desire to make firearms less easily available. As one industry representative muttered grumpily to me, the next two years may be a little too interesting for comfort.