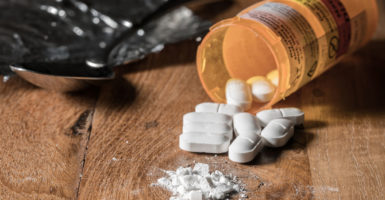 According to the Centers for Disease Control and Prevention, 52,898 people in the U.S. died from drug overdoses in 2015. (Photo: iStock Photos)

During a speech Thursday on the opioid epidemic, President Donald Trump said that “more people are dying from [drug] overdoses today than from gun homicides and motor vehicles combined.”

According to the Centers for Disease Control and Prevention, 52,898 people in the U.S. died from drug overdose in 2015.

These figures add up to 48,594 total deaths. This means 4,304 more Americans died in 2015 from drug overdose than from gun homicides and motor vehicle accidents combined.

Although the CDC has not yet finalized overdose death data for 2016, it estimated in early August that the 2016 overdose death count is set to exceed 64,000. If this estimate proves correct, overdose deaths in the U.S. are set to again eclipse deaths from gun homicide and motor vehicle accidents combined.

The National Security Council estimates a record 40,000 Americans may have died from motor vehicle accidents in 2016, while Gun Violence Archive data indicate 15,081 Americans died in 2016 from gunfire other than in a suicide.

Combined, 55,081 people in the U.S. are estimated to have lost their lives in 2016 from motor vehicle accidents and gun homicides—almost 10,000 fewer deaths than those from drug overdoses that year alone.

Trump’s contention that “more people are dying from overdoses today than from gun homicides and motor vehicles combined” is true.

Kush Desai is a fact check reporter for The Daily Caller News Foundation.