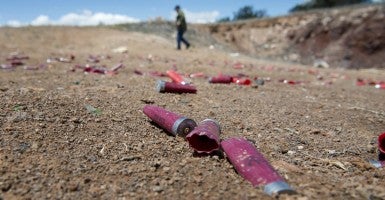 Firearms from Operation Fast and Furious have been connected to at least 69 killings, according to the Justice Department. (Photo: Eddie Moore/ZUMA Press/Newscom)

Five years after America first learned of the Operation Fast and Furious federal gunwalking program, new information about the extent of the scandal continues to bubble to the surface.

According to Justice Department documents obtained by conservative watchdog Judicial Watch, Fast and Furious weapons have seen wide use in Mexican drug cartels, with reports suggesting the guns are tied to at least 69 killings.

Originally conceived by the Bureau of Alcohol, Tobacco, Firearms and Explosives in 2009, Operation Fast and Furious was created to deliberately sell guns to illegal buyers near the Mexican border, which the ATF hoped to trace back to Mexican cartels. The operation passed approximately 2,000 guns into the hands of illegal buyers while achieving minimal law enforcement ends.

Of these 94 firearms, the documents indicate, 20 were involved in “violent recoveries.” These included several mass murders, such as one reported shooting June 30, 2014, in Tlatlaya, Mexico, in which 22 people were killed. One .50 caliber rifle was recovered from the hideout of the notorious Sinaloa Cartel kingpin Joaquín “El Chapo” Guzmán when he was rearrested Jan. 11.

“These revelations confirm just how dangerous this reckless law enforcement operation was that happened under [former Attorney General] Eric Holder’s watch—and that the administration has tried to hide by refusing to turn over internal documents and communications about it,” Hans von Spakovsky, a senior legal fellow at The Heritage Foundation, said.

“There have been many political scandals in Washington over the years, but this is the only one that led directly to the murder of many individuals because of the irresponsible and thoughtless political decisions of the president, the attorney general, and their political appointees.”

Judicial Watch President Tom Fitton said in a statement that he expects repercussions from Fast and Furious to continue in the future.

“As the production of documents from the ATF continues,” he said, “we expect to see even further confirmation of Obama’s disgraced former Attorney General Eric Holder’s prediction that Fast and Furious guns will be used in crimes for years to come.”

The Department of Justice did not respond to The Daily Signal’s request for comment.