A Tale of 2 Pandemics and the Government’s Response 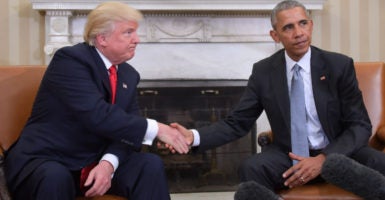 On Nov. 10, 2016, President Barack Obama, who dealt with the spread of the H1N1 pandemic in 2009 and 2010, meets in the Oval Office with President-elect Donald Trump, who was still more than three years away from facing the coronavirus pandemic. (Photo: Jim Watson/AFP/Getty Images)

The first confirmed case in the United States was on the West Coast. The spread was faster than governments or hospitals were prepared for. The World Health Organization declared it a pandemic, and the U.S. president eventually declared a national emergency.

Before it was over, the pandemic had hit 60.8 million Americans, hospitalized 274,304, and killed 12,469, according to the Centers for Disease Control and Prevention.

This was the H1N1 virus, also known as the swine flu, which emerged in April 2009 and lasted until April 2010.

As President Donald Trump has talked about the U.S. response to the new coronavirus disease, which health officials call COVID-19, he frequently has brought up what he considers his predecessor’s poor and slow response to the H1N1 virus.

“They didn’t do anything about it,” Trump said of the Obama administration in a March 4 interview with Fox News Channel’s Sean Hannity. “Interestingly, with the swine flu, children were—in particular, they were vulnerable, sort of the opposite in that respect. But children were very vulnerable to the swine flu.”

The president rounded up the number of deaths. With regard to the border, H1N1 began in Mexico, but it broke out almost entirely in North America, and thus there was no travel ban.

Two months into the current health crisis, there have been 3,487 confirmed cases of the coronavirus in the United States across 49 states, with 69 deaths, according to the coronavirus.gov website set up by the Centers for Disease Control and Prevention.

Trump made the comment to Hannity amid heavy criticism from Democrats and left-leaning media outlets that his response to COVID-19 was poor.

Medical professionals say, however, that it’s difficult to compare the ailments or the government’s response.

“It’s not an apples-to-apples comparison in terms of response.

H1N1 was a type of influenza. The development of the vaccine was fairly straight forward,” Dr. Lee Gross, owner of Epiphany Health and president of Docs 4 Patient Care Foundation, told The Daily Signal.

“COVID-19 is essentially a brand new virus,” Gross said. “So we have had to use technology that wasn’t meant for it to fight coronavirus. We’re building a parachute on the way down.”

The first U.S. case of H1N1, which originated in Mexico, was in California, he said.

The coronavirus began behind closed doors in Wuhan, China, he added, where neither the World Health Organization nor the U.S. Centers for Disease Control and Prevention were allowed to get boots on the ground to assist Chinese medical officials.

“I’m not sure what President Trump said is 100% accurate. A lot of response for H1N1 was built into the system, but it’s not fair to say the Obama administration didn’t do anything,” Gross said, adding:

His concern seems to be why wasn’t there mass hysteria then as there is now. … I don’t think President Obama is to blame for the outbreak of H1N1, and I don’t think President Trump is to blame for coronavirus. Maybe some policies could lessen the burden of developing a vaccine, but given the rapidity of the spread, I’m not sure any policy would make an immediate difference.

The first phase of trials for a coronavirus vaccine began Monday, a record of 65 days from the onset of COVID-19, Dr. Anthony Fauci, director of the National Institute for Allergies and Infectious Disease, said later in the day during a White House briefing.

It took about six months to develop and market a vaccine for H1N1, according to a Factcheck.org article meant to be critical of Trump.

The article quoted Rep. Michael Burgess, R-Texas, who praised the Centers for Disease Control and Prevention during a 2016 House hearing for its speed in developing the H1N1 vaccine.

It’s possible that by the time COVID-19 runs its course, it will be more severe than the swine flu’s 60 million cases and 12,000 deaths, said Amy Anderson, a registered nurse and founder of the Global Nurse Consultants Alliance.

“The coronavirus is much more contagious than H1N1. I don’t know what the total rate of cases will be in a year,” Anderson, an assistant professor of nursing at the Texas Christian University and University of North Texas Health Science Center School of Medicine told The Daily Signal. “I anticipate it could get worse if the mitigation measures the administration put in place do not work.”

Anderson stressed that this is not a good time for political finger-pointing or looking back.

“Honestly, now is not the time to criticize anyone,” Anderson said. “No two pandemics or epidemics are alike, and how we respond is just going to be based on the information we have at the time.”

The election year drives some of the discourse, said Dr. Kevin Pham, a medical doctor who contributes commentary to The Daily Signal on health care and public health issues.

Pham said one real consequence of polarized political discourse is that one side is prone to unnecessary panic while the other side might ignore warning signs and think the virus is overhyped.

“I don’t hold it against the Obama administration. No one saw it coming,” Pham said. “There is never a good enough response to a pandemic.”

Pham recalled that he and many others had a “blasé attitude about H1N1” because it was a form of the flu.

People generally know the coronavirus is not the flu, he said.

“We can avoid the outcome of H1N1 if we do the things we are supposed to do to prevent escalation and keep a lid on it,” Pham said.

After the H1N1 virus began in Mexico, the first U.S. case of swine flu–in California—was identified on April 15, 2009. On April 25, the World Health Organization declared H1N1 a public health emergency.

One day later, Obama declared it a public health emergency—not a national emergency.

At the end of the month, Obama asked Congress for $1.5 billion to fight H1N1. In September, he asked for another $9 billion.

The World Health Organization declared H1N1 a pandemic on June 11 and more than a month later, Obama declared a national emergency.

Trump declared a national emergency Friday, two days after WHO declared the coronavirus to be a pandemic.

In one optimistic projection, confronting the H1N1 pandemic should help hospitals be prepared for the coronavirus, according to an article published in the March 3 issue of the Journal of the American Medical Association by Drs. Amesh Adalja, Eric Toner, and Thomas Inglesby, all from the Johns Hopkins Bloomberg School of Public Health in Baltimore.

Hospitals prepared for a 2003 SARS epidemic and the avian influenza, or bird flu, outbreak of 2005. This allowed for many hospitals across the country to be equipped when the H1N1 outbreak hit in 2009, according to the Johns Hopkins study.

“In many ways, the current coronavirus epidemic is reminiscent of the beginning of the 2009 influenza pandemic,” the Johns Hopkins team wrote. “Many health care institutions did substantial work on those plans at that time, [and] institutions should use those plans as the foundation for needed planning efforts now.”