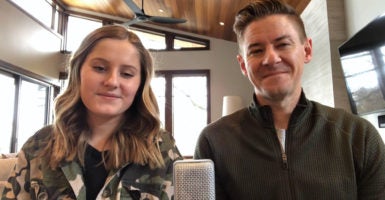 Father and daughter Mat and Savanna Shaw had no intentions of making a video for anyone other than their family and friends when they sat down to sing “The Prayer” at their kitchen table in late February.

“I think it’s been touching for some people to see a family, a father-daughter relationship, enjoying their talents and spending time together, it reminds them of their own relationships,” Shaw told The Daily Signal in a phone interview.

The father-and-daughter duet from Kaysville, Utah, decided to sing “The Prayer”—originally made famous by Celine Dion and Andrea Bocelli in the late ’90s—when 15-year-old Savanna’s choir canceled practices due to the coronavirus.

“I just wanted to be able to keep in touch with my friends,” Savanna said. “I had not had social media before this … . I just wanted to post a song to start out on Instagram.”

Inasmuch as neither Shaw is a master of social media, the song’s success can only be attributed to their talent in performing it and the message of hope it inspires.

“I don’t have any experience with YouTube at all, as far as posting … it took me hours,” Shaw, 39, said with a laugh. “I had to figure out how to start a channel and then [“The Prayer”] was our first post to YouTube.”

The success of their first song has led the duo to continue to sing other songs of hope and inspiration.

All four of the songs they have recorded so far have been made in their “quarantine recording studio”—what the pair calls their in-home closet setup.

“Neither of us have ever set foot in a real-life recording studio, so I don’t know what’s normal,” he said. “But for us, normal is an iPad, a little mic that plugs into the iPad that we bought at the Apple Store. [The iPad] is propped up by my pajama pants in my closet.” And after they record the audio in the closet, the video portion is filmed at their kitchen table.

When asked why they are continuing to produce duets together, they concurred: They want to bring hope to those who need it.

“I want [viewers] to walk away with a little bit of hope,” Savanna said. “I want to give them some joy. There is a lot to be sad and scared about right now. But I want to be the good thing that helps create joy, because I feel like we need more of that right now.”

Not only are the Shaws blessing people around the world with their vocal talent, they are also finding a deeper level of connection as a father and daughter in an extremely trying time.

Shaw echoed his daughter’s sentiment. “If there has been a silver lining in this coronavirus situation for us, it’s that we do get to spend a whole lot more time together,” he said, adding:

I have heard that the only thing more contagious than a virus is hope. And so we are just trying to do our small little part in the world to spread a little bit of hope.