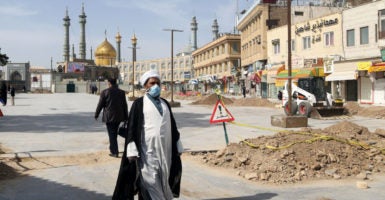 People wear face masks as a precaution against the coronavirus outbreak after deaths and new confirmed cases revealed in Qom, Iran on March 17, 2020. Fatima Masumeh Shrine is closed for visitors to prevent the spread of the virus. (Photo: Fatemah Bahrami/Anadolu Agency/Getty Images)

Iran, which faces one of the most widespread COVID-19 coronavirus outbreaks outside of China, is paying a heavy price for the mismanagement, dishonesty, and self-serving priorities of its Islamist clerical regime.

Iran’s totalitarian rulers remain in denial about the scope and consequences of the pandemic, preferring to save face rather than save lives.

The ayatollahs played down the danger of the outbreak and delayed taking decisive measures to slow the spread of the virus to project total control and invincibility, and to avoid damaging the regime’s political, ideological, and economic interests.

The excavation of trenches for mass graves at the Behesht-e-Masoumeh complex in Qom, the epicenter of Iran’s virus outbreak, and images of coronavirus victims in black bags crowding the floors of an Iranian morgue are grim signs that the scale and impact of the coronavirus is far deadlier than the Iranian regime is reporting.

Iranian officials initially downplayed the severity of the outbreak, losing critical time to contain the spread of the virus.

The government announced the first two coronavirus-related deaths on Feb. 19, two days before parliamentary elections that hard-liners hoped would restore the tattered legitimacy of the oppressive, corrupt, and increasingly resented regime.

Iran’s supreme leader, Ayatollah Ali Khamenei, accused the country’s enemies of exaggerating the threat posed by the coronavirus shortly before the elections to discourage the turnout of voters, which he knew would be low due to the lack of popular support for the regime.

In November, anti-government protests in Iran demonstrated the Iranian people’s dissatisfaction with the regime. Disaffection turned into outright anger against the regime after Iran’s Revolutionary Guards shot down a Ukrainian airliner in January, killing many Iranian passengers and refusing to take responsibility for three days.

In a statement to the country on Feb. 25, Iranian President Hassan Rouhani refused to admit that the outbreak was quickly spiraling out of control, claiming that this was “one of the enemy’s plots to bring our country into closure by spreading panic.”

Now, almost a month later, as of March 20, nearly 20,000 Iranians have been infected and more than 1,430 are dead, including many senior officials and clerics.

Health experts suspect the number of infections is much greater, with estimates as high as 2 million. The question is: How and why did Iran become the third-largest center of the virus behind China and Italy, and to what degree is the Iranian regime responsible?

The holy city of Qom, where the virus was first reported in Iran, is home to important Shiite religious sites that attract pilgrims from around the world. Initial reporting indicates that the virus might have originated with a businessman traveling between Qom and Wuhan or with a Chinese worker.

There are also more than 700 Chinese students at Qom Seminary and at al-Mustafa International University, giving Qom the largest Chinese population in Iran.

One Iranian Sunni scholar has charged that the COVID-19 virus in Iran originated with these students, an allegation that the theocratic regime is unwilling to admit to for political reasons.

In any event, as COVID-19 cases began to multiply in Qom, the Iranian regime failed to enact serious measures to contain the outbreak. Religious shrines in Qom remained open, as authorities initially balked at closing the shrines to the public, which would have reduced the income earned from millions of pilgrims each year.

Even after Iran’s Health Ministry recommended that the shrines be closed, religious leaders dragged their feet.

Some clerics and their followers claim that the shrines had divine powers that cure diseases, leading several pilgrims to videotape themselves licking objects in one shrine, ostensibly to prove that their religious fervor protected them from the virus.

Iran also was slow to halt air travel from China, which would hurt plans to boost Chinese tourism. Although the government announced all air travel between China and Iran was ended on Feb. 14, flights continued on Mahan Air, an airline partly owned by Iran’s Revolutionary Guards.

By Feb. 24, the virus had spread to most of the 31 provinces in Iran. In addition to the local population, elite members of the Revolutionary Guard Corps and religious clerics have tested positive for the disease at an alarming rate.

At least 25 Iranian officials and clerics have been infected, 12 of them dying from the illness. That number continues to climb daily, with no foreseeable end.

Rouhani publicly refused to institute nationwide quarantines, calling them “anarchic,” and boasted of Iran’s public health system. Regime officials bragged that Iran exported face masks to China and a COVID-19 outbreak would not be a problem in Iran.

But Iranian doctors and nurses in overwhelmed hospitals say that they have been warned by security officials to keep quiet about the scale of the virus outbreak and have been forced to attribute deaths to other causes in official paperwork.

Security forces stationed at hospitals have threatened to arrest medical personnel who disclose the number of patients, fatalities, or shortages of equipment.

While public places such as schools, places of worship, and cultural centers belatedly have closed down, crowds continue to fill the markets of Tehran in preparation for the upcoming celebration of the Persian New Year, while Shiite worshippers pack themselves into mosques and shrines in Qom.

Iranians have been put at risk by the callous policies of a clerical dictatorship that values retaining power, protecting its image, and safeguarding its own economic, political, and ideological interests over public health.

The virus is not going away, and it seems that more trenches will need to be dug for mass graves to accommodate the many more deaths and infections that are in Iran’s future.