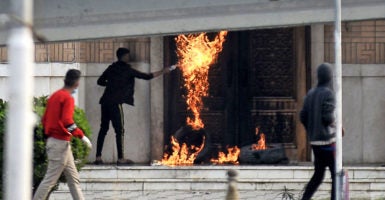 Youths set tires ablaze at the entrance of a shrine dedicated to an Iraqi Shiite ayatollah during anti-government demonstrations Nov. 29 in the holy shrine city of Najaf. About 45 people reportedly were killed and hundreds wounded across Iraq a day after the torching of Iran's consulate in Najaf. (Photo: Stringer/AFP/Getty Images)

Iran’s Islamist dictatorship has been challenged and rebuked in recent weeks by massive political protests—not only at home, but also in the spheres of influence that the regime carved out in Iraq and in Lebanon.

But gradually, the protests evolved into full-blown anti-government movements, as unaccountable and corrupt regimes blocked any progress toward reforms that would address the protesters’ legitimate demands.

In Iran, the biggest demonstrations since the 2009 Green Movement protests over Iran’s rigged presidential election were triggered by the regime’s decision to abruptly raise gasoline prices by roughly 50%.

Hit hard by U.S. sanctions, Tehran was forced to reduce its heavy subsidies for domestic fuel prices. Rather than having the sanctions lifted through diplomatic engagement and compromise, the regime chose to continue on its path of confrontation with the United States, intimidation of its neighbors, and lavish support for terrorist proxies.

Long-suffering Iranians, fed up with the economic mismanagement, corruption, and misplaced priorities of their repressive government, flooded the streets of Iran’s cities Nov. 15 to protest the price increases.

The demonstrators also focused their ire on the regime’s expensive interventions in regional conflicts.  In Isfahan, they chanted: “No to Gaza, no to Lebanon. We sacrifice our lives for Iran.”

The regime responded with systematic violence against unarmed protesters, who were attacked by internal security forces, particularly the paramilitary thugs of the Basij militia, who beat them up and fired live rounds into crowds at close range.

The regime suppressed the internet to prevent Iranians from mobilizing through the use of social media.

Tehran blamed the protests on a foreign conspiracy hatched by Iranian opposition groups based abroad and the usual suspects; namely, the United States, Israel, Britain, and Saudi Arabia.

As protests subsided, the commander of the Islamic Revolutionary Guard Corps, Gen. Hossein Salami, proclaimed that Iran had defeated the foreign conspiracy behind the unrest, which was part of the “world war” between Iran and “arrogant powers.”

Salami claimed that the Revolutionary Guards had acted with “self-restraint” despite the fact that at least 143 Iranians were killed in the protests, according to Amnesty International.

Iranian authorities claim that 70 gas stations, 731 banks, and 140 government sites were torched during the uprising. It claimed more than 1,000 Iranians were arrested, although outside estimates put the number at close to 4,000.

The Iranian regime also has been a target of protesters in neighboring Iraq, who resent Iranian influence over the Shiite political parties that dominate Iraq’s weak coalition government.

Iraqi Prime Minister Adel Abdul Mahdi made a halfhearted effort to satisfy the protesters by calling for some reforms, but their demands hardened in response to escalating repression from the government.

Soleimani, commander of the elite Quds Force of the Islamic Revolutionary Guard Corps, which is responsible for coordinating with Iran-backed militias, also pushed Iraqi militia leaders last month to reject demands for Abdul Mahdi to step down.

The result has been a bloodbath amid a deepening crisis in Iraq. More than 430 protesters have been killed, and thousands have been wounded since Oct. 1.

Perhaps surprisingly, most of the protesters have been Iraqi Shiites, who belong to the same Islamic sect as most Iranians. The Shiite heartland in southern Iraq, which provides most of Iraq’s oil exports but receives few of its benefits, has seen some of the biggest and bloodiest protests.

As Iran-backed Iraqi militias stepped up their attacks on protesters, Iran increasingly has been denounced by Iraqi Shiites. On Nov. 27, protesters attacked and set on fire the Iranian consulate in Najaf, the Shiite holy city that serves as the seat of Iraq’s Shiite religious establishment.

“We went for the consulate because now we are aware who is the reason behind all that we are going through,” a local activist told The Washington Post. “Iran controls all these Islamic parties and their armed militias in the streets that have made our life like hell. They are controlling the economy of the city and everything goes to them. Meanwhile, we can’t even get a job.”

After the grand ayatollah called for a change of leadership, Abdul Mahdi announced Nov. 29 that he would step down.

Finding a suitable successor will be a difficult task. Under the Iraqi Constitution, President Barham Salih is required to ask the largest bloc in parliament to nominate a new prime minister.

But that process is unlikely to satisfy Iraqi protesters, many of whom call for the ouster of all current political leaders and a complete overhaul of Iraq’s corrupt power-sharing system.

Revolting Against the Revolution

The alienation of Iraqi Shiites isn’t Iran’s only problem. In Lebanon, where anti-government protests sparked by a new tax on messaging services have continued since Oct. 17, the influence and reputation of Hezbollah, Iran’s most powerful terrorist proxy, is increasingly threatened.

As in Iraq, Lebanese protests have attracted strong support from Shiites dissatisfied with the performance of Shiite political parties that have been radicalized, supported, and guided by Iran.

Although Hezbollah once was regarded as the champion of Lebanon’s Shiite community and protector of Lebanon’s national interests against Israel, it increasingly is perceived to be primarily serving Iran’s interests.

Thousands of Hezbollah fighters were deployed to Syria under the command of Iran’s Revolutionary Guards to shore up the regime of Bashar al-Assad, Iran’s junior ally.

U.S. sanctions on Iran and Hezbollah have severely undermined the ability of both to buy political support through economic means. Moreover, Hezbollah has been feeding from the trough of Lebanese government corruption and has violently opposed efforts to reform Lebanon’s unsustainable political power-sharing system.

Young Shiites now increasingly see Hezbollah as part of Lebanon’s problem, not the solution. Hezbollah’s image has been tarnished further by its efforts to disrupt and intimidate Lebanon’s protest movement.

Iraq and Lebanon are on a trajectory to become failed states if Tehran continues on its current course.

Like Iran’s radical regime, Lebanese and Iraqi Islamists supported by Iran have been forced to suppress the efforts of reformers, including Shiites whom they claim to champion.

In the short run, the Islamists are likely to retain power through the coercive force of their militias and Revolutionary Guards. But in the long run, Iran’s aging ayatollahs and their Arab proxies have little to offer young Muslims except repression, economic dysfunction, ideological struggle, and endless conflict.

The harder Iran’s dictatorship struggles to oppose reforms that threaten its power, the sooner young Iranians and Arabs forced to live under Tehran’s thumb will reach the conclusion that Iran’s Islamist model is bankrupt economically, politically, and morally.

Why Protests Rocking Lebanon Forced Out the Prime Minister