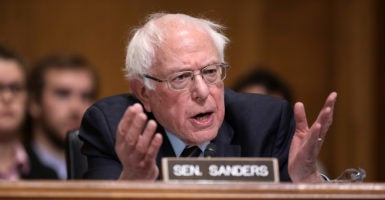 Sen. Bernie Sanders, I-Vt., asks a question on Jan. 16, 2019, as a member of the Senate Environment and Public Works Committee.(Photo: Chip Somodevilla/Getty Images)

Pundits have argued that younger voters, especially those under 30, are less inclined to be bothered when they hear the word “socialism,” since they have no firsthand memory of the Cold War.

To some extent, this must be true. Those who weren’t alive during socialism’s cruelest catastrophes—or even its many banal failures—will be less put off by the idea.

Then again, if a presidential candidate were praising the excellent public transportation system of the Third Reich or going on about some alleged benefit to American slavery, they rightly would be chased from the public square forever— even though the vast majority of voters have no firsthand knowledge of the Holocaust or slavery. Anti-Semitism and racism haven’t disappeared, and neither has Marx, sadly.

It’s true that Sen. Bernie Sanders’ fans aren’t acquainted with socialism (and, incidentally, this is true only if we ignore the existence of Cuba, Venezuela, North Korea, China, etc.), but the fact is that most Sanders supporters don’t seem to have a rudimentary grasp of basic economics much less the “socialism” they think exists in Scandinavian nations.

What they do have are lots of feelings. And, like millions of other saps over the past century-plus, they’ve been enticed by the collectivist “ethic”—its revolutionary appeal, its religiosity, and its quixotic promises.

“Fascism is remembered as a crime,” John Hayward correctly points out. “Communism is treated like a mistake.” I’d add that capitalism is judged by its few failures and socialism by its few successes.

Sanders will never praise the “literary programs” of any nontyranny. But if I’ve learned anything from Twitter—or perhaps, more accurately, if Twitter has solidified any of my existing suspicions—it’s that academia is teeming with hard-left apologists.

There are plenty of fantastic historians out there, of course, but many of the loudest academics, the ones media often relies on, are either apologists for socialism or socialists themselves.

Forget college. There are few more powerful arguments for school choice than seeing a high school kid bring home Howard Zinn’s preposterous Marxist history of the United States. I suppose an adventurous young reader could seek out “The Gulag Archipelago,” “Darkness at Noon,” or “Animal Farm.” How many do?

Education, or a lack of it, isn’t the only problem. As David Bernstein notes, “the cultural elite in this country—Hollywood, the universities, etc.—treats the Cold War as if the great world-historical crime of the mid-20th century was not Stalinism and its aftermath, but McCarthyism and its aftermath.”

Indeed, a person consuming culture during the last 20 years of the Soviet Union’s existence, as I did, would be led to believe that McCarthyism was the single worst crime perpetrated in the 20th century—and capitalism its single most destructive idea.

Though collectivism has rained down more starvation and death on humanity than any other ideology, I can recall maybe a handful of films that even took an oppositional position to it. And most of those movies were infantile (don’t get me wrong, I love “Red Dawn,” but it’s silly.) Even James Bond rarely treated the commies as the enemy. Mostly, he was trying to stop rogue agents from pitting the two superpowers against each other.

Maoism was responsible for 50 million or more deaths, and Stalinism another 20 million or 30 million, but I can’t think of a single important American novel or film depicting those holocausts.

Offhand, I can recall one American movie that seriously portrayed the inhumanity of collectivism — “The Killing Fields,” though one hopes there are at least some others I’ve forgotten. That movie is now 36 years old.

Today, though, a person can watch more than one movie romanticizing a murderous thug like Che Guevara (two of them were produced in the 2000s), but not one about the bravery of refuseniks (a group that Sanders, a man who claims he is deeply moved by his Judaism, couldn’t spare a single word for on his Soviet Union honeymoon) or courageous anti-communist fighters of Latin America, Czechoslovakia, Hungary, or anywhere else. It’s a shame.

No, Sanders isn’t Stalin. He claims to be a democratic socialist. I get it. But there’s an array of good reasons no one says, “Hey, let’s give democratic fascism a shot.”

There are just as many good reasons not to normalize socialism. At their core, both ideologies are authoritarian. The only difference is that academics and our cultural stewards have whitewashed one of them.