Socialism, Not Coronavirus, Seen as Real Threat to Economy 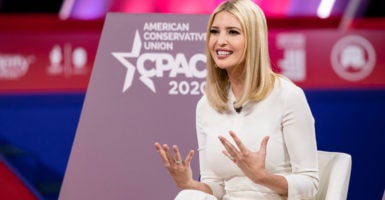 "We have reached into the sidelines of the economy to pull people into the workforce,” Ivanka Trump, daughter of and senior adviser to President Donald Trump, says Friday at the Conservative Political Action Conference. (Photo: Samuel Corum/Getty Images)

The stock market has taken a hit amid concerns about the spread of the new coronavirus, but the disease doesn’t pose a real danger to the economy, chief White House economist Larry Kudlow said Friday in an appearance before an annual gathering of conservative activists.

“A virus is not going to sink the economy,” Kudlow, director of the National Economic Council,  said at the Conservative Political Action Conference, known as CPAC. “What … could sink the American economy is the socialism coming from our friends on the other side. That’s the greatest fear that I have.”

Kudlow, one of President Donald Trump’s top economic advisers, was joined on the CPAC stage by Ivanka Trump, senior adviser to the president as well as his elder daughter.

This could be a great time to buy stocks low, Kudlow said of Wall Street’s jitters about the coronavirus.

“Business investment is up. Personal income and consumer spending is up. All the Federal Reserve surveys are not showing a supply chain breakdown,” Kudlow said, adding:

The stock market is very fearful. But for the long-term investor, which you all should be—since I believe and Ivanka believes that the country is in good, safe hands right now–you might think about buying the dip.

Kudlow and the first daughter echoed other administration officials who have promoted the “blue-collar boom” under Trump, but also talked about specific demographics that got a boost.

Referring to “what I affectionately call the snowflake boom,” Kudlow asserted that young Americans ultimately will reject socialism.

“More millenials are working today, participating in the labor force, than ever before,” Kudlow said. “They may tell you they like socialism, but they don’t. They are not going to vote for it in private.”

“We want growth in this country to be inclusive. We have an incredibly low unemployment rate across every single demographic,” she said. “The unemployment rate today for disabled Americans is the lowest in history. … We have reached into the sidelines of the economy to pull people into the workforce.”

The president’s daughter also said that women gained 70% of the new jobs created.

“For the first time in history, there are more women working today in the labor force than there are men. We make up the majority of the workforce,” she said.  “Women are winning, but everyone is winning.”