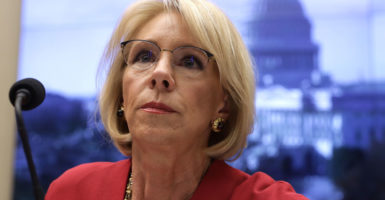 “There’s too many people in this city [who think] that the federal government has the answers for everything,” Education Secretary Betsy DeVos says at CPAC. Pictured: DeVos testifies Dec. 19 before the House Education and Labor Committee. (Photo: Alex Wong/Getty Images)

“I want to tell everyone today you are either for children or against children when it comes to educational freedom and choice in education.”

Conway said support for school choice is broad among the general public, yet a deep partisan divide exists on the issue, as the Trump administration has found.

“There is no ‘but,’ there is no excuse, there is no talk of ‘But the teacher unions … ,’” she told the CPAC crowd. “You are either helping these brown and black and rural children get more opportunities, or you’re not.”

Choice in public education often is blocked by liberals at the state level who protect unions whose members work for badly run public schools, Conway noted.

Many children, DeVos said, are being “failed by schools that aren’t working for them, that aren’t the right fit.”

Trump is committed to ensuring that every child has access to a quality education, DeVos said, no matter where they come from.

She also warned about the problem of federal interference in education and touted the Trump administration’s efforts to reduce the government’s role.

“President Trump campaigned on getting rid of Common Core, which was a massive overreach on the part of the federal government,” DeVos said. “We’ve done that.”

Keeping power over education in the hands of states, local communities, and families is essential, she said.

“There’s too many people in this city [who think] that the federal government has the answers for everything,” DeVos said, referring to the nation’s capital a few miles away from the conference in Maryland. “And we know that’s not the case.”

DeVos promoted legislation, the Education Freedom Scholarship, that she said “would dramatically improve opportunities for more than a million kids nationwide.” She added:

This proposal is one that would create a federal tax credit in the form of scholarships to give rocket fuel to what states are already doing to advance choices and freedom in education.

We stand for freedom and opportunity, and we trust that parents and families are best to make decisions on behalf of their children, and the other side trusts the federal government to make these decisions.

She said the federal government long ago demonstrated that it can’t fix education from the top down:

Over the last 40 years, since the Department of Education was founded, we’ve spent over $1 trillion at the federal level alone with the express purpose of closing the achievement gap. Not only has it not closed and narrowed one little bit, it has actually gone wider in some measures and some communities.