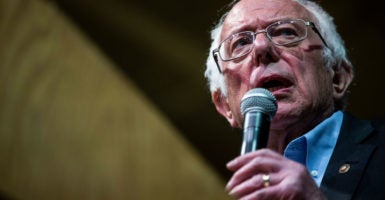 By a vote of 224-189 that fell along party lines, the House of Representatives voted to block Republicans’  resolution, which not only condemned numerous human rights abuses that took place under the Castro regime, but recent instances where Sanders refused to fully denounce the late Fidel Castro’s dictatorial rule over Cuba.

The resolution was introduced by Rep. Mario Diaz-Balart, R-Fla., who represents a congressional district that has 335,000 residents of Cuban descent—roughly half his entire constituency.

During a “60 Minutes” interview that aired Sunday, Sanders said it was “unfair” to say everything about the Castro regime was negative, noting how Castro launched a “massive literacy program” upon assuming power in 1959.

The following day, during a town hall event in South Carolina, the Vermont independent and self-described democratic socialist stood by his remarks. During a presidential debate Tuesday night, he again touted Cuba’s progress on education.

“If anybody wants to know the devastation of socialism and the tyranny that so often accompanies it, I invite you to speak to some of my constituents, including thousands, thousands of former political prisoners now in exile,” the Florida Republican said, and also listed several political dissenters held in captivity in Cuba.

“For years, the Cuban regime has been on the list of state sponsors of terrorism for its support of other terrorist states, terrorist organizations, and violence around the world and in this hemisphere,” Diaz-Balart said.

Despite widespread condemnation of Sanders by members of the Democratic Party—including U.S. representatives, presidential candidates, and a Democratic National Committee spokesperson—no Democratic lawmakers voted to let the resolution move forward.

Reps. Donna Shalala and Debbie Mucarsel-Powell, both Florida Democrats,  issued scathing public statements against Sanders’ comments, but both notably skipped the vote Thursday, allowing them to avoid a decision on the resolution.

This move was not lost on Republican leadership.

“Rep. Shalala and Rep. Mucarsel-Powell’s constituents deserve to know why the representatives they sent to Washington did not even bother to vote on an important resolution to condemn Sen. Sanders’ comments and the Castro regime,” said Mark Bednar, a spokesman for House Minority Leader Kevin McCarthy, R-Calif.