Fidel Castro May Be Dead, but Tyranny Remains in Cuba 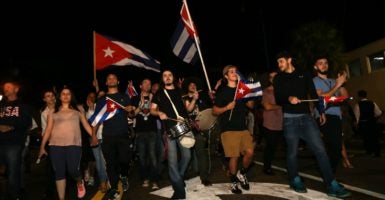 Some in the Cuban population of Miami gather in Little Havana on 8th Street to celebrate the death of Fidel Castro, Cuba's longtime communist dictator. (Photo: Jeff Binion/Newscom)

Late Friday evening, Cuban state media reported the death of their former leader, Fidel Castro, at age 90. Some will mourn his passing or even glorify his life. But for many others, not even his death will fill the void caused by his life.

For over five decades, Cubans suffered under the tyranny of Fidel and then his brother Raul, now 85. They watched the regime destroy a country and export the same perverted model of social justice throughout the developing world.

My grandfather would often tell us of how he would hide indoors while Fidel’s firing squads would slaughter innocent people nearby.

Religion was criminalized, dissent was violently punished, and Cuban citizens became property of their communist state. Fidel’s rule brought the world to its closest point of nuclear war during those fateful 13 days in 1962. He indoctrinated hate and pushed millions out of their country.

As a first-generation Cuban-American who grew up in Miami, I know this story all too well. My family was forced to leave Cuba after not bowing to the regime. They and hundreds of other families sought refuge at the Peruvian Embassy in Havana and for over a week they lived in squalor there, attempting to figure out their next steps.

Returning to their home was not an option; Fidel’s thugs had declared the families persona non grata and vandalized their property. After some time, they were able to flee to the U.S. as part of the Mariel exodus in 1981. While they temporarily lived in a refugee camp upon arrival, they are now thriving Americans, like the rest of the Cuban exile community. To this day, my family has never returned to Cuba.

In reality, it is not that important to me whether Fidel is alive or dead. What matters is that the same repressive government and hostility toward freedom he created remains strong.

Now more than ever, America needs to shift back to a policy of empowering the Cuban people. Supporting freedom-loving dissidents in their efforts to salvage their country should once again be a priority for the U.S.

Yet since Dec. 17, 2014, America has been on the wrong side of history. While well intentioned, President Barack Obama’s policy of engaging the Castro regime clearly has not been working.

Instead of pushing for freedom, the U.S. has legitimized the Western Hemisphere’s longest military dictatorship. Emboldened by U.S. complacency, the regime in the past two years has produced historic levels of political and religious persecution.

As a Christian, I am enjoined to pray that Fidel Castro finds the absolution in death he denied millions throughout their lives. However reluctantly, I will do so.

But as the daughter of Cuban political refugees, his death is a reminder of our duty to continue bearing witness of the horrors committed in the name of Fidel’s revolution.