Instead of Criticizing Walmart, Sanders Should Praise the Company for Giving Workers More Paid Time Off 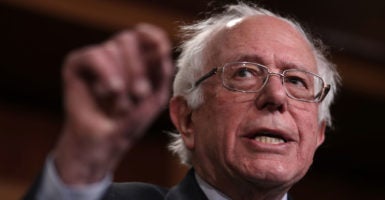 The other day, I gave my 5-year-old daughter a cookie and she complained, “I didn’t want just one.”

Walmart—the largest employer in the United States—recently announced that it would provide a new, paid time off bank for workers.

It will allow Walmart’s roughly 1.5 million U.S. workers to accumulate up to 48 hours of paid time off to use for unexpected absences without affecting their quarterly bonuses.

Like my 5-year-old, instead of being grateful to Walmart for granting a new benefit to workers, Sen. Bernie Sanders, I-Vt., criticized the move as “not nearly good enough.”

“Walmart can and must pay all of its workers at least $15 an hour with good benefits,” he said.

The problem with that assertion, however, is that Sanders has never run a business and doesn’t know whether or not Walmart can pay all its workers $15 per hour. Nor does he know what Walmart workers want in terms of compensation and benefits.

Walmart executives do have a good grasp of those things, however, because their success and livelihood depends on them.

With an unemployment rate of just 4 percent and more job openings than there are workers looking for jobs, Walmart has to meet workers’ desires if it wants to remain competitive.

According to Walmart’s announcement, paid time off is what its workers want.

“These changes are based directly on feedback from associates who wanted more flexibility when life happens, while also being rewarded for consistently showing up to work and serving our customers,” the retail giant said.

Choices, flexibility, and opportunity are extremely important to workers—often more so than wages.

But government-imposed rules and regulations that dictate how employers can run their businesses restrict choices and opportunities, and can end up hurting the very workers they intend to help.

Take the $15 per hour minimum wage, for example.

Numerous studies estimate that it would eliminate millions of jobs, resulting in zero income for them, instead of an intended “living wage.”

Most of those jobs would be entry-level ones that serve as steppingstones to higher-paying jobs, meaning younger workers and those with the fewest skills would be the hardest hit.

A $15 minimum wage also would devastate many small businesses and entrepreneurs that simply cannot afford—at least at the outset—to pay everyone $15 per hour.

So-called fair pay bills would result in rigid pay scales and one-size-fits-all jobs that could hurt more women than they help. Moreover, government attempts to force employers’ hands through punitive lawsuits could cause companies to discriminate against women in the hiring process.

Politicians’ attempts to grant workers new benefits such as paid family leave and paid vacation will only shift the costs back to workers through lower pay and benefits or fewer hours and jobs.

These unintended effects arise from the fact that employers face bottom lines. Unlike Congress, businesses can’t just raise their debt limits and push current costs onto future workers. If they did that, they would quickly find themselves out of business.

Micromanaging employers is not the way to increase incomes for Americans. On the contrary, top-down dictates have the opposite effect.

Instead, lawmakers should pursue ground-up policies that create lasting and sustainable gains, such as giving parents school choice options to improve children’s potential, eliminating the double taxation on investments that otherwise increase workers’ productivity and earnings, and reducing unnecessary regulations and barriers to entry that limit entrepreneurship and innovation.

As for Sanders’ relentless criticism of profitable companies, one cookie is better than none. That’s at least something my 5-year-old now understands.