Evidence in Favor of School Choice Continues to Mount 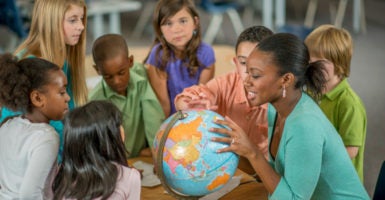 A new study shows that the D.C. Opportunity Scholarship Program had a statistically significant positive effect on reading outcomes for students two to four years into the program. (Photo: iStock Photos)

The evidence in favor of the positive benefits of school choice grew considerably stronger this month with the release of a new methodologically rigorous evaluation of the D.C. Opportunity Scholarship Program.

The D.C. Opportunity Scholarship Program is a school voucher program in Washington, D.C., set up by Congress, which provides students with scholarships to attend private schools of choice.

Kaitlin Anderson and Patrick Wolf released “Evaluating School Vouchers: Evidence from a Within-Study Comparison” in order to compare the performance of quasi-experimental methods to the “benchmark” outcomes from a prior experimental evaluation of the D.C. Opportunity Scholarship Program that Wolf conducted from 2004 to 2009.

Anderson and Wolf re-examined the test score impacts found in the earlier random assignment evaluation. That earlier evaluation found that although reading scores increased, increases were not statistically significant, and could have been due to chance.

The analytic method Wolf and Anderson use in this new evaluation is different enough from Wolf’s initial experimental evaluation that it qualifies as a second D.C. school choice experimental study.

Unlike in the prior evaluation, they were able to leverage the IV technique to demonstrate that the D.C. Opportunity Scholarship Program had a statistically significant positive effect on the reading outcomes of participating students two, three, and four years after beginning participation in the program, with the strongest gains accruing in the fourth year.

This new study should now count as a new experimental evaluation of the effect of voucher use on student achievement, raising the tally of such evaluations from 15 to 16 in all. Moreover, this new evaluation is particularly important because, as the authors explain, “the logical explanation for that result is that students who participated in the [Opportunity Scholarship Program] were even more disadvantaged than their demographics suggested, thus completely contradicting the ‘cream-skimming’ claims of school choice opponents.”

For example, they find that students who apply for a voucher may be negatively selective on unobservable characteristics not captured in test scores, as it is possible that parents seek out school choice options when their children are struggling the most.

If true, this runs counter to the argument frequently made by school choice critics that choice programs “cream skim” the “best” students. They suggest that quasi-experimental methods that include both applicants and non-applicants likely undercount the positive impacts of choice as a result of this negative selection.

The ability to employ random assignment methods in education research is important, but rare. Random assignment requires oversubscription of a given program, which often then leads to a lottery.

A lottery—such as the one used when there are more applicants than available scholarships, as in the D.C. Opportunity Scholarship Program—allocates vouchers randomly to students who apply.

Notably, observed differences between the treatment and control group account for motivation and selection bias, “as mere chance replaces parental motivation as the factor that determines whether a child gains access to school choice.”

The causal impacts that can be inferred from experimental evaluations make them the gold standard of research—analogous to a double-blind trial in medical research—and are the “ideal counterfactual, representing what would have happened to the randomized treatment group (a.k.a. lottery winners) absent the intervention.”

This new, important evaluation by Anderson and Wolf adds to a growing body of experimental evidence pointing squarely in favor of choice producing benefits for participants.

The evidence on school choice is overwhelming in favor of its merits. This additional new rigorous evaluation should inform policy moving forward.