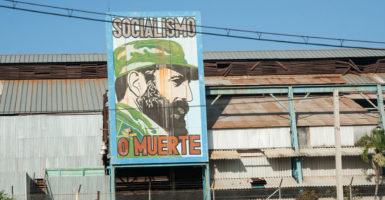 The "torture was kept [up] for days and nights without a respite,” an anti-Castro dissident says. (Photo: iStock Photos)

A group of Cuban exiles and former political prisoners gathered on Capitol Hill to recount human rights abuses that they and their relatives suffered at the hands of the Fidel Castro regime.

In a hearing Wednesday organized by Freedom House and the Justice Cuba International Commission, survivors told gripping stories about friends and family who were imprisoned, tortured, and killed for resisting communist rule in Havana.

The tales of two former political prisoners stood out among the heart-wrenching accounts of abuses, if only for their parallels to the strange, unexplained sonic attacks inflicted upon U.S. diplomats in Havana last year. Ernesto Diaz Rodriguez and Luis Zuniga, anti-Castro dissidents who were sent to hideous regime prisons, said they were repeatedly subjected to “ultrasonic” torture over more than 20 years in confinement.

“The methodology consisted of placing large loudspeakers around 4 feet high each … at both ends of the hallway of cells,” Zuniga recalled of his experience in 1979. “Then, they were connected to some sort of electronic device that produced high-pitched sounds.”

“The sounds oscillated from high pitch to very high pitch that almost pieced the eardrums,” he added.

Zuniga went on to describe symptoms from the torture sessions, saying that he began to feel “increasingly uneasy” and “unable to think.” Other prisoners suffered debilitating headaches. The brutal punishment lasted for days, he recalled, leading to the suicide of a fellow inmate.

“This torture was kept [up] for days and nights without a respite,” Zuniga said. “It ended when one of the prisoners … hung himself. He died from the torture.”

For the former prisoners and exiles gathered at the hearing, the memories of audio torture were made fresh this summer, when it was revealed that American diplomatic personnel had been subjected to similar treatment over the previous year.

What the State Department described as “sonic attacks” may have occurred in diplomatic residences and hotels in Havana—not in the regime’s dank prisons—but many of the physical and mental effects were eerily similar to those described by Zuniga.

Victims of the mysterious attacks, which began in late 2016 and continued through this summer, experienced disturbing symptoms, including permanent hearing damage, memory loss, and impaired cognitive function. In several cases, the affected officials reported hearing noises similar to loud crickets and then experiencing physical distress.

Last month, the Associated Press obtained and released an audio recording of the noise that U.S. intelligence officials believe was used in some of the incidents. Like the sound described by the Cuban political prisoners, the noise heard by American diplomatic personnel was a high-pitched whine that modulated in intensity and tone.

The U.S. has not directly accused the Castro regime of carrying out the attacks. Investigators are looking into the possibility that Cuban intelligence, perhaps a rogue element of spies, orchestrated the provocations in order to derail the normalization of diplomatic relations begun under the Obama administration, reports Politico.

Whoever is to blame, the episode has soured relations between Washington and Havana. In a series of diplomatic reprisals, the State Department reduced the size of its Cuban mission, ordered Havana to withdraw several of its own diplomats, and issued a warning advising Americans to avoid travel to Cuba until further notice.

Those moves were a prelude to new travel and trade restrictions President Donald Trump implemented earlier this month, halting and reversing the bilateral rapprochement initiated by his predecessor. Trump, who came into office highly critical of the Obama administration’s opening to Cuba, has made good on his promise to take a tougher stance toward the Castro regime.

Trump’s position was met with unanimous approval among the exiles, their relatives, and Cuban-American politicians assembled at the Justice Cuba event. Rene Bolio, Justice Cuba’s chairman, told attendees that human rights abuses in Cuba did not end with Fidel Castro’s death and the succession of his brother, Raul Castro.

Rep. Mario Diaz Balart, R-Fla., one of the most ardent Cuba hawks in Congress, concluded the event with praise for the Trump administration’s hard line on Castro—and a swipe at President Barack Obama’s approach.

“I am exceedingly grateful that the policy of the last number of years, of trying to legitimize the corrupt, murderous [Castro] regime, of the visual of the president of the United States doing the wave at a baseball game with a tyrant—those days are over,” Diaz said.