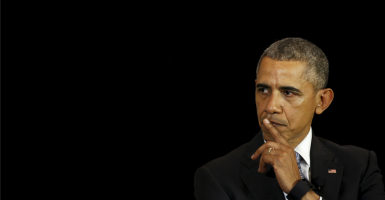 “Unfortunately, as the investigations continue, so too have one of the unintended but collateral consequences of such vigilance: mass de-risking,” wrote Michael J. Bresnick, who previously served as executive director of Obama’s Financial Fraud Enforcement Task Force, under which Operation Choke Point was created. “Members of the industry have raised their hands in frustration and simply avoided lines of business typically associated with higher risk. This reaction to [the Justice Department’s] enforcement initiative, and similar matters brought by the Federal Trade Commission and the Consumer Financial Protection Bureau, is certainly understandable.”

Bresnick addressed the issue in an op-ed for American Banker.

Critics of the program say it was used to put the financial squeeze on entire industries the Obama administration doesn’t like, such as firearms sellers and payday lenders.

In addressing what he referred to as “consequences” of Operation Choke Point, Bresnick called for government officials to work “closely” with banks to solve problems he says the program created.

“Only when the government truly understands the consequences of its actions (especially the unintended consequences), acknowledges those concerns to those directly affected, and works closely with them to address the challenges they face, can we expect that the multitude of good actors who desperately want to avoid the last resort of de-risking will be able to do so with relative comfort,” he wrote.

The concept of “de-risking” refers to banks’ decision not to do business with industries that federal regulators flag as “high risk” for fraud. In the article, Bresnick also suggested that corrective actions taken by the Justice Department and other federal banking regulating agencies to address some of the program’s shortcomings are insufficient to stop banks from denying service to legal businesses.

“All of the public statements in the world by [the Justice Department] or the regulators that they are only targeting the truly bad fraudsters, and that they are not going after minor violations, won’t change the natural reaction to de-risk because there’s simply no telling exactly where the government will decide to draw its phantom line.”

In order to fix it, he said, government officials must work with banks instead of against them.

Put simply, the government will get better results if it works with industry rather than against it, and acknowledges the terrible tension industry faces between serving a community and subjecting itself to increased scrutiny.

Over the past two years, The Daily Signal has documented multiple cases of banks denying legal business owners access to banking services due to the “high risk” nature of their industry.

Just last month, a large bank in New England denied a line of credit to a former police officer who started a gun and tactical business in Monroe, Conn., telling the business owner on voicemail it “no longer lends to firearms dealers.”

“Michael Bresnick is the ultimate capitalist,” Wise said. “He created Operation Choke Point at the expense of small businesses and their consumers. Now he is making money off of trying to help those businesses deal with the program he created. The losers in this game of regulatory cronyism are America’s consumers.”

In Bresnick’s bio, he states that he “previously served as executive director of President Obama’s Financial Fraud Enforcement Task Force, under which Operation Choke Point was created.” Bresnick now serves as chair of the financial services investigations and enforcement practice at Venable LLP.

Prior to the publication of Bresnick’s article, little was known about the inner workings of Operation Choke Point. Both U.S. Consumer Coalition and The Daily Signal were denied public requests for documents relating to the program.

“Until today, the individuals responsible for this unconstitutional program refused to admit that the [Financial Fraud Enforcement Task Force] was responsible for managing the program,” Wise said. “In fact, FOIAs by [U.S. Consumer Coalition] that requested documents that would prove the [Financial Fraud Enforcement Task Force] involvement had been stonewalled and ignored for years.”

The Financial Fraud Enforcement Task Force, which Bresnick led, was created by Obama in November 2009.

“[W]hen President Obama created the Task Force in November 2009,” Bresnick said in a 2013 speech, “he formed the largest federal, state, and local coalition ever assembled to investigate and prosecute financial fraud.”

In that same speech, Bresnick said:

If we can eliminate the mass-marketing fraudsters’ access to the U.S. financial system—that is, if we can stop them from getting paid—then we can significantly reduce the harm caused by this type of fraud[.] … We hope to close that access to the banking system—effectively putting a chokehold on it—and put a stop to this billion-dollar problem that has harmed so many American consumers.

The Daily Signal reached out to Bresnick, but he was not immediately available for comment.