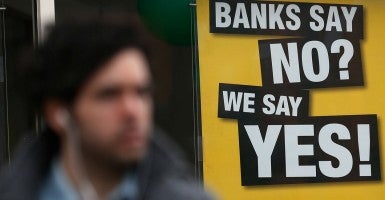 Running his business, Gregory Bone says he did “everything we could” to avoid a conflict. His industry—payday lending—is overseen by state and federal officials.

But despite his clean record, Bone said U.S. Bank informed him on Jan. 22 that his checking account was being abruptly shut down. The only explanation for it, Bone said, was Operation Choke Point.

“There’s just no other reason for it,” Bone, who lives in Bentonville, Ark.,  told The Daily Signal.

For two and a half years, through House hearings, Congressional investigations, and budgeting gimmicks, Republican lawmakers have been working to stop Operation Choke Point.

Up until earlier this month, when the House voted 250-169 in favor of a bill that would end the initiative, they had little success. In order to take effect, the bill must still pass through the Senate and be signed by the president.

But is the effort too little too late—or are innocent business owners still being hurt by Operation Choke Point?

The Daily Signal set out to find out.

Eighteen months ago, The Daily Signal was regularly contacted by business owners who believed they were being impacted by the program. Since Congress ramped up its investigations into Operation Choke Point, those stories have slowed down.

But according to members of Congress and industry experts, they haven’t stopped.

“It hasn’t gone away,” Rep. Blaine Luetkemeyer, R-Mo., told The Daily Signal in an interview earlier this month. “[But] it has been reduced.”

Extent of the Impact

The Missouri congressman said his office maintains an email address where business owners who believe they’ve been affected can contact him. While those emails have become “fewer,” Luetkemeyer said, they’re still coming in.

Bone, 58, said it wasn’t just his business account that was shut down—a former employee listed as a signer on the account received an identical letter notifying her that both her personal savings and checking accounts with U.S. Bank were also being closed.

“Both my store manager and former employee separately contacted U.S. Bank and were both told the closure notices were to be issued to all account signers because Branson Quick Cash Inc. was a payday lender and money service business,” Bone said.

The Daily Signal reached out to U.S. Bank for an explanation. They did not return our request for comment.

Bone said he can’t be sure his account closure is the result of Operation Choke Point, but said he “always received good compliance ratings” in his annual bank examinations.

“We’ve had that account for 15 years,” Bone said. “I asked why my account was being closed and she said because we’re a payday lending business.”

“Operation Choke Point continues to harm law-abiding business and the millions of consumers that use them,” he said, adding:

My company, like many others, has lost several banking relationships, which has severely restricted our ability to serve our customers. The administration has made no attempt to repair that damage nor counteract the perception that banks who do business with us will be targeted by the government. Choking off entire industries’ access to crucial banking services simply because unelected bureaucrats dislike them is a dangerous precedent that should never be repeated.

The Daily Signal reached out to the Justice Department seeking comment about the status of Operation Choke Point. A spokesperson did not return our request for comment.

‘A Wrong That Needs to Be Made Right’

The Daily Signal has not recently heard stories of business owners in the firearms and ammunition industries being affected, but groups like the National Rifle Association and the National Shooting Sports Foundation continue to publicly oppose the program.

“Retailers continue to face anti-gun discrimination by banks and other financial service providers, as well as by non-financial service providers,” Larry Keane, a senior vice president at the National Shooting Sports Foundation told The Daily Signal. “This issue is so important the firearms industry that [the National Shooting Sports Foundation] scored the vote on the Financial Institution Customer Protection Act.”

Since the beginning of this year, Luetkemeyer said he’s also been contacted by a credit bureau in California, along with a tobacco shop in Florida who both believe they’ve been affected. Until his legislation, the Financial Institution Customer Protection Act, reaches the president’s desk, he expects more stories to roll in.

Bone calls Operation Choke Point “a wrong that needs to be made right.”

“It doesn’t matter about the nature of your business,” he said. “This is America and you have a right to do lawful business. If it applies to payday lending or money service businesses today, it may apply to beauty shops or Wal-Mart tomorrow. We all must have a banking relationship–they’re important.