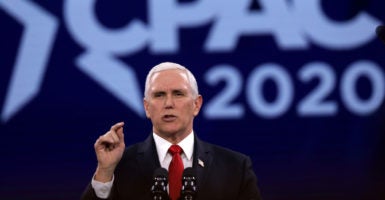 Vice President Mike Pence warned a gathering of conservative activists Thursday about the perils of socialism and its historical record of failure.

“Socialism has failed everywhere it has been tried, in every era in every continent. Freedom works,” Pence told a cheering crowd at the Conservative Political Action Conference, known as CPAC. “It was freedom and not socialism that ended slavery, ended two world wars, [and] has made America a beacon of hope.”

The vice president, tasked with leading the government’s response to the coronavirus, also said Americans “expect us to work together” to keep the public safe.

Pence repeated President Donald Trump’s vow that “America will never be a socialist country” as he noted that the ideology has gained in popularity among lawmakers on the left in Congress as well as on college campuses.

Socialism is being sold as a promise of better health care and a cleaner environment, Pence said.

Pence noted Venezuela’s grave problems and shortages as the country is in the midst of a struggle for freedom against what the Trump administration considers dictator Nicolas Maduro’s illegitimate government.

“Venezuela was once the second-wealthiest country in our hemisphere,” Pence said. “Then we wake up after a decade of a socialist dictatorship. Almost 5 million people in that country have fled to neighboring lands.”

Pence spoke about a woman from Venezuela who said her grandchildren had to rise at 4 a.m. to get a ticket to stand in line to buy a piece of bread in the afternoon.

“This president and this administration will continue to stand with the people of Venezuela,” Pence said.

“Whether it’s called ‘Medicare for All’ or a ‘Green New Deal,’ Democrats have embraced socialism,” he said. “History tells us it has literally impoverished millions of people and robbed the liberty of generations.”

We’re all in this together. This is not the time for partisanship. The American people expect us to work together. … I promise you this administration will work with leaders in both parties, on the state and local level. This president will always put the health and safety of America first.

Pence said the White House’s coronavirus task force has met daily and that as of Thursday, 15 known cases of the disease have been detected in the United States.

“The risk to the American public remains low,” Pence said. “We are ready for anything.”