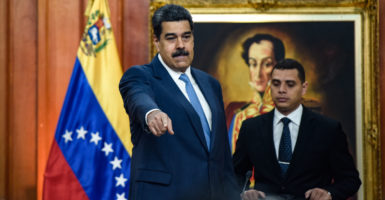 The Trump administration on Tuesday imposed sanctions on a Russian state-owned oil company that has helped prop up the illegitimate regime of Venezuela's Nicolas Maduro, seen here at the presidential palace Feb. 14 in Caracas, Venezuela. (Photo: Carolina Cabral/Getty Images)

The Trump administration announced Tuesday it has imposed sanctions on a Russian state-controlled oil company that does business with the Venezuelan regime of Nicolas Maduro, the socialist strongman clinging to power as an illegitimate president in the South American nation more than a year after the country’s legislature voted to remove him from office.

The Treasury Department imposed sanctions on Rosneft Trading S.A., the Swiss-incorporated, but Russian-controlled energy company for operating in the oil sector of the Venezuelan economy. The department also sanctioned the assets of Rosneft Trading S.A. President Didier Casimiro, who claims to act for or on behalf of the firm.

The Trump administration has been ramping up sanctions on the Maduro regime since early 2019, when he refused to relinquish power.

“Any entity throughout the world that conducts business with the Maduro regime, pursuant to our August executive order, is subject to sanctions by the United States,” a senior administration official told reporters. “And as this action has shown towards probably the gravest violator of that sanction, Rosneft Trading, that we will pursue anyone else who does so.”

“It’s very simple: Do not engage in such transactions with the Maduro regime,” a senior administration official said. “Once there’s a democratic transition, it’ll be a whole new world in Venezuela, where the Venezuelan people will get to choose its partners in an open democracy with transparency and normal commercial relationships.”

During his State of the Union address earlier this month, Trump introduced as a guest in the U.S. House chamber Juan Guaido, Venezuela’s lawful president under its Constitution. Guaido drew bipartisan applause in a speech that didn’t get much of it, as even House Speaker Nancy Pelosi, D-Calif., gave him a standing ovation.

“The president was clear in his message at the State of the Union that we will continue to take measures. This is another step in our maximum-pressure campaign,” a senior administration official said.  “As we have stated in the past, we are probably at 50[%] or 60% of our maximum-pressure campaign. … We hope to never to have to get to 100% of maximum pressure, because we hope that together, with countries throughout the world, Venezuela will have a democratic transition.”

Rosneft Trading S.A. is a subsidiary of the Russian government-controlled Rosneft Oil Co., Russia’s second-largest state-owned oil company. The subsidiary was established to assist Rosneft Oil in carrying out its foreign projects, according to the Treasury Department.

The U.S. government suspects that Venezuela has used the firm to circumvent sanctions.

“This is significant, to go after the Russian state-owned energy company, and it sends a message that contrary to what some are saying, the president does still care about what is happening in Venezuela,” Ana Quintana, senior policy analyst for Latin America and the Western Hemisphere at The Heritage Foundation, told The Daily Signal. “These sanctions deprive the regime from access to the U.S. financial system.”

“Rosneft Trading S.A. and its president brokered the sale and transport of Venezuelan crude oil,” Treasury Secretary Steven Mnuchin said in a statement. “The United States is determined to prevent the looting of Venezuela’s oil assets by the corrupt Maduro regime.”

Venezuela has detained since November 2017 six American citizens—known as the Citgo 6—who worked for the Citgo oil company, in a move designed to put a relative of Maduro’s predecessor, former Venezuelan leader Hugo Chavez, in charge of the oil giant. Citgo is majority-owned by a Venezuelan state-owned company.

In early 2019, the Venezuelan National Assembly invoked Article 233 of the country’s Constitution to declare Maduro illegitimate, and Guaido, as head of the elected assembly, stood up to fill the void. Maduro hasn’t budged, and there has been a struggle for a freedom movement since in the socialist country.

The United States is among nearly 60 countries that recognize Guaido as the leader of Venezuela. On the other side, Russia, China, Cuba, North Korea, and Iran are among about 20 nations that still recognize the Maduro regime.