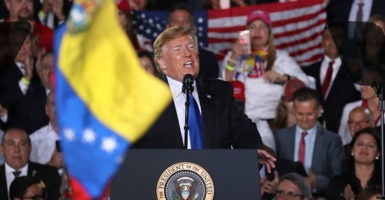 “Socialists profess a love of diversity, but they always insist on absolute conformity,” President Donald Trump says Monday night in remarks on Venezuela during a rally at Florida International University in Miami. (Photo: Joe Raedle/Getty Images)

The movement for freedom in Venezuela reveals that the “twilight hour of socialism has arrived in our hemisphere,” President Donald Trump said Monday night in a speech in Miami.

“The Venezuelan people have spoken, and the world has heard their beautiful voice,” Trump said in his remarks at Florida International University to an audience that included Venezuelan-Americans.

Venezuelan dictator Nicolas Maduro clings to the title of president even as about 50 nations recognize opposition leader Juan Guaido as the country’s interim president.

“All the nations in our hemisphere have the shared interest in preventing the spread of socialist tyranny,” Trump said, adding:

Maduro began his second term in January after a disputed election fraught with allegations of fraud. The Venezuelan National Assembly invoked Article 233 of the country’s constitution to declare Maduro illegitimate. Guaido, as head of the elected assembly, filled the void.

“Not long ago, Venezuela was the wealthiest nation, by far, in South America, but years of socialist rule have brought this once-thriving nation to the brink of ruin,” Trump said:

The tyrannical socialist government nationalized private industries and took over private businesses. They engaged in massive wealth confiscation, shut down free markets, suppressed free speech, and set up a relentless propaganda machine, rigged elections, used the government to persecute their political opponents, and destroyed the impartial rule of law.

In other words, the socialists have done in Venezuela all of the same things that socialists, communists, totalitarians have done everywhere that they’ve had a chance to rule. The results have been catastrophic.

During the speech, the crowd broke out into chants of  “USA, USA” several times.

The president also talked about the coming decline of the Venezuela-Cuba axis.

“For decades, the socialist dictatorships of Cuba and Venezuela have propped each other up in a very corrupt bargain. Venezuela gave Cuba oil,” Trump said. “In return, Cuba gave Venezuela a police state run directly from Havana. … The ugly alliance between the two dictatorships is coming to a rapid end. A new future is beginning.”

Trump asserted that the United States must stand up for democracy. He alluded to the recent resurgence of socialist ideas from the American left, including Democrats in Congress who have embraced universal health care and what they call the Green New Deal.

“Socialism is a sad and discredited ideology rooted in the total ignorance of history and human nature, which is why socialism, eventually, must always give rise to tyranny, which it does,” Trump said. “Socialists profess a love of diversity, but they always insist on absolute conformity.”