Why We Must Defeat Socialism 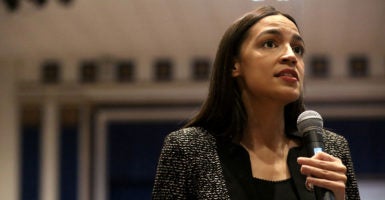 Rep. Alexandria Ocasio-Cortez, D-N.Y., has been a leading proponent for socialism despite its repeated failures. (Photo: Yana Paskova/Getty Images)

Today, we find ourselves at a crossroads in the history of our great nation—a nation founded upon the simple, self-evident truth that we are endowed by our Creator with certain unalienable rights, that among these are life, liberty, and the pursuit of happiness, and that to secure these rights, governments are instituted among men, deriving their just powers from the consent of the governed.

With those words, the Declaration of Independence gave birth to a new nation rooted in the principles of limited government, individual freedom, and the rule of law through self-government—and it set into motion the greatest experiment in human freedom and prosperity the world has ever known.

Our Constitution protected these principles through the separation of powers, federalism, and the Bill of Rights.

And just as the Constitution protected our political freedom, it also protected our economic freedom and enabled the American people to flourish through entrepreneurship, business, and private enterprise.

In short, American capitalism delivered the most free, prosperous, and successful country in the history of the world.

Today, however, these principles are under attack, and our experiment in liberty is threatened by left-wing politicians who openly embrace socialism. It is also threatened by defenders of central planning in the media and the academy, and even some business leaders who are calling for a redefinition of the purpose of a corporation.

During the last three years, through tax cuts, deregulation, unleashing America’s energy resources, and easing restrictions on credit markets, we have witnessed a rebirth of freedom and free enterprise—and a very fortunate move away from socialism.

The result has been an American worker boom.

If we retreat from these hard-fought gains, we will return to what Austrian-British economist and philosopher Friedrich Hayek called the road to serfdom.

The socialist proposals of today—with populist names like “Medicare for All,” the Green New Deal, and the Stop Wall Street Looting Act—are a danger to a free society. They are nothing more than central planning schemes that accumulate power in the government at the expense of the people through administrative coercion, force, discrimination, and measures that are entirely incompatible with the preservation of a free society.

The experience of history is clear: Whenever and wherever governments embraced socialism, the result has been a loss of individual freedom, economic stagnation, diminished productivity, deprivation and shortages, misery, and death.

Central planning in Germany, Italy, and Japan before World War II, and in the Soviet Union and China in the Cold War era, invariably resulted in soul-destroying, liberty-crushing totalitarianism.

To paraphrase Hayek, fascism, communism, and so-called “democratic socialism” are merely variants of the same totalitarianism that tends to result from central control of all economic activity.

Today, leading Democratic lawmakers are calling for the expansion of socialist policies and an intrusion of government into the free market. These efforts threaten the principles of individual freedom and the path to prosperity that a capitalist system creates.

I can only hope that my colleagues on the other side of this debate and I share a common goal: to lift up those who are struggling and provide them with the economic security they need to live happy, healthy, prosperous lives. We certainly have vastly different opinions on the best way to get there.

The central planners believe prosperity is best achieved through government intrusion into the market, socialization of industries, and a redistributive model that disincentivizes personal achievement and responsibility.

We, however, believe that the best way to achieve economic security and prosperity is to expand opportunities, allow innovation to thrive, and create an environment where hard work pays off. It’s not about giving each person an equal piece of the pie—it’s about growing the pie as much as possible so that more people may partake.

Free markets not only increase economic prosperity, but also provide better standards of living. This concept applies in the U.S. and in jurisdictions around the world.

Catholic Priest Robert Sirico, president and co-founder of the Acton Institute, sums it up nicely in his book “Defending the Free Market: The Moral Case for a Free Economy”: “If you want to help the poor, start a business.”

Last month, I led a group of my Republican colleagues in Congress in a discussion on the House floor about the merits of capitalism and the dangers of socialism. We offered success stories from people and businesses in our districts, highlighted the negative impacts socialist policies have made throughout history, and, most importantly, outlined a vision for continued economic growth and prosperity for the American people.

I appeal to the good sense of the American people to reassert the spirit of liberty, to reject socialism and central planning, and to resolutely embrace the cause of freedom and free enterprise.