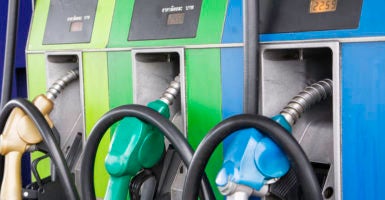 Virginia Democrats want to increase the gas tax from 16 cents to 28 cents per gallon over the next three years, a 75% increase. (Photo: Thanit Weerawan/Getty Images)

At the top of the list: Increasing the gas tax from 16 cents to 28 cents per gallon over the next three years, a 75% increase.

The main justification: Hundreds of thousands of Virginians experience daily headaches from traffic congestion. Whether it’s clogged roads in Northern Virginia or jams on I-95, few debate that there is a serious problem.

However, massive tax increases don’t, by themselves, fix problems. In this case, the legislative proposal would direct over 30% of transportation funding away from roads, far in excess of the actual usage of nonroad travel.

A new transportation funding formula would give 22 cents of every dollar to mass transit. This money would, of course, flow primarily to the state’s urban areas: Norfolk, Richmond, and Northern Virginia. Yet even in these parts of the state, cars accommodate the overwhelming majority of travel in terms of both mileage and number of trips.

It’s not for lack of trying. Continued subsidies for the Washington Metropolitan Area Transit Authority have failed to prevent ridership declines (down 16% from 2012 to 2018). These subsidies have, however, effectively transferred huge sums of money from working-class families in western Virginia to upscale professionals commuting to Washington.

Expanding the Virginia Railway Express is another part of the plan. Fares cover only 30% of the current railway express budget; the rest ($110 million) comes from federal, state, and local subsidies. Yet the railway express averages just 18,700 riders per day, meaning each one gets a whopping $5,900 subsidy over the course of the year.

Virginians should be especially wary of plans to “invest” in high-speed rail. These projects often become money pits. California’s high-speed rail project, for example, has been plagued by multibillion-dollar cost overruns (two to three times the original projected costs) and lengthy construction delays.

The most confusing item in Virginia’s proposed transportation formula is the Space Flight Fund. The plan is to continue spending millions of dollars annually on subsidies for the Mid-Atlantic Regional Spaceport on Wallops Island.

Although NASA has made use of the Mid-Atlantic Regional Spaceport, the spaceport’s organizational focus has been on trying to attract commercial-space launch activity with the tag line “zero gravity, zero tax.” This might be accurate for any company that wants crony subsidies, but the tax is not so “zero” for Virginians stuck with paying into the space fund.

Those dollars should stay in Virginia, or at the very least stay on the planet.

Clearly, Virginia’s most pressing transportation problem revolves around the Washington metro area. As the D.C. suburbs expand to the west and south, more commuters are clogging the limited number of arterial highways. This also has ripple effects downstate.

So far, the political answer has been predictably simplistic: more taxes, more spending, more subsidies. Some of this is hard to avoid, since the growing population in Northern Virginia requires more infrastructure. But there is another path available: land-use reform.

Development in the Washington area is hamstrung by the city’s building height restriction and by the amount of residential land that is devoted exclusively to single-family housing in suburbs like Arlington and Alexandria.

Rather than raising the gas tax by 75% to fuel ever-increasing subsidies for rail, Virginia’s leaders should reduce subsidies between different modes of transportation to ensure fair funding for roads. They should also make an effort to promote sensible zoning rules, including in the nation’s capital. That can produce real relief for drivers.