Lack of Accountability, Not Funding, Behind DC Metro Failures 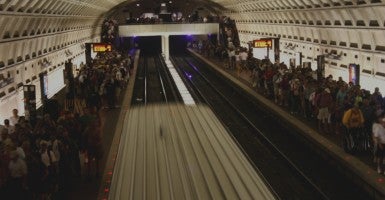 WMATA is the only transit agency to receive direct appropriations from Congress every year. (Photo: Flickr / Tim / CC BY-NC-ND 2.0)

After a troubled start to the year, the D.C. region’s Metrorail system has had to take a drastic step. Following a fire that snarled service for thousands of commuters, the entire rail system is shutting down for 29 hours so that the Washington Metropolitan Area Transit Authority (WMATA)—which operates the system—can run emergency inspections.

Though a lapse in service of this magnitude is unprecedented, it’s just the latest in Metro’s troubling saga.

Even routine tasks such as repairing escalators are stymied by restrictive union rules that prevent Metro from competently performing basic maintenance.

The flailing system has recently been derided as the worst run in the country by commentators on both the left and the right. Though D.C.’s population is booming, rail ridership is down to the lowest levels seen since 2004, as even Metro admits that it is “struggling to provide reliable service to customers.” On-time performance fell well below its target in 2015, hitting its lowest mark ever in October. Riders’ basic safety is a concern following a fatal smoke incident and a number of assaults on the system.

Even routine tasks such as repairing escalators are stymied by restrictive union rules that prevent Metro from competently performing basic maintenance. Indeed, a more complete documentation of Metro’s inadequacies fills no fewer than 116 pages in a federal report.

So things have not been going to well for WMATA, to say the least. Naturally, the knee-jerk reaction for many is to blame a lack of funding for Metro’s woes. But that is nonsense. WMATA receives over $850 million in taxpayer subsidies for operations annually and nearly $700 million in federal funds for capital improvements.

WMATA is the only transit agency to receive direct appropriations from Congress every year.

Indeed, WMATA is the only transit agency to receive direct appropriations from Congress every year. And though WMATA recovers more from fares than most transit agencies do, these fares make up only 46 percent of its operating costs.

So a lack of funding is clearly not the problem. Rather, its funding source is the problem. Because WMATA receives a steady flow of taxpayer money from both federal taxpayers and eight different local governments, it is scarcely accountable to anyone, least of all the people who rely on it to get to work every day. This is in stark contrast to most businesses, which rely on their actual customers to fund their bottom line and need to be responsive to them by necessity.

Instead, this wide range of subsidies has over time produced the Metro that we have today: a bloated, unaccountable system with little incentive to be responsive to market demand, minimize operating costs, or allocate its funding efficiently. Perhaps the epitome of bad decisions caused by distortionary subsidies is Metro’s $3.1 billion Silver Line expansion, which was made possible by nearly $1 billion in federal grants, including $900 million from the New Starts discretionary grant program.

Because this huge sum of federal money was on the table for “free,” Metro’s incentives were skewed to take the money and irresponsibly expand the system, rather than address the already substantial maintenance backlog on its original lines. The result is that billions were squandered on the new line (which has failed to meet its optimistic ridership projections) while the existing system is left to literally burn.

Though Metro deserves some credit for recognizing its deeply ingrained problems (its new general manager admitted that it is “much worse” than expected) and is taking steps to address safety concerns, it will take much more than a 29-hour shutdown to begin to fix this broken system. Federal subsidies should be eliminated, and Metro’s organization needs to be radically reformed so that its focus turns from getting government subsidies to establishing self-sufficiency and user accountability.

Beyond the Beltway, D.C.’s experience with Metro—and this shutdown specifically—should be a warning to cities across the country.

Though the promise of shiny rail systems built with easy federal money may be enticing, the result is not often what is best for commuters or taxpayers.