Democrats Flip the Health Care Script: If You Like Your Plan, You Can’t Keep It 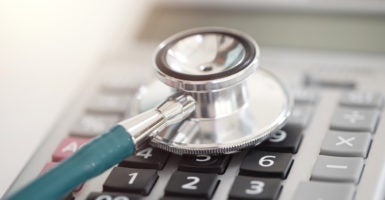 The Congressional Budget Office finds that H.R. 987 would result in 1.5 million people going without the insurance coverage that they chose. (Photo: Moment/Getty Images)

The U.S. House is putting to a vote this week a bill that would threaten the health coverage of 1.5 million people.

While these plans were unnecessarily restricted by the Obama administration, the Trump administration has eased regulations to make incremental progress toward expanded affordable health coverage choices.

The House bill would reverse this progress, capping duration of the plans at 90 days, and stripping consumers of the right to renew their coverage.

The Congressional Budget Office (CBO) finds the bill would result in 1.5 million people going without the insurance coverage they choose, and estimates that one-third of those would remain uninsured. In addition, the CBO found that the bill would only negligibly affect premiums for Affordable Care Act-compliant insurance (a 1 percent reduction in premiums).

The bill would allocate an additional $100 million annually for outreach and educational activities in healthcare.gov states. The premise: More people would enroll in exchange-based insurance if they were better informed.

That theory is belied by the fact that enrollment has been falling in exchange-based plans since 2016, despite efforts by governments at all levels to boost sales. One state alone (California) spent $110 million last year in such efforts, only to see enrollment fall by 5 percent.

Moreover, it’s not clear why the federal government, which already pays tens of millions of dollars annually to insurance companies to subsidize the cost of their product, should also take on the burden of marketing those products on behalf of well-heeled private corporations.

This program has consistently fallen short of expectations. One grantee, for example, received $200,000 in federal money, only to sign up a total of exactly one person. Nationally, the $62.5 million the government spent on Navigators resulted in 81,426 signups, accounting for just 0.7 percent of enrollees.

The Trump administration reduced Navigator funding in light of this poor performance. The administration also notes that with the Affordable Care Act about to enter its sixth open season, public awareness of the availability of coverage is high, and the need for one-one-one counseling is both unnecessary and duplicative of what private brokers and agents do.

In spite of this, the House bill would increase funding for the program.

But that’s not all: the bill also would give states $200 million to create their own exchanges, if they have not already done so. This limited-time offer, expiring in 2023, would only give a states their piece of the money for the first two years its exchange is in place.   After that “free trial” period, states would be back in the same position they are now—making it unclear why the federal government would spend this money, since most states have long since made up their minds on whether to establish exchanges and are free to do so at any time.

It appears to be a solution in search of a problem. For liberals in Congress, this pattern is almost a meme.

Last week, House Democrats voted to undercut innovation that’s led to lower premiums and higher enrollment, while protecting people with pre-existing conditions.  And about half of House Democrats are signed on to a bill that outlaws *all* private coverage options, in order to put everyone on a government-run plan.

Instead of undermining access to health coverage options—and superfluously spending taxpayer money on ineffective programs—Congress should focus on increasing access to a broad range of health care choices, and lowering costs for consumers.