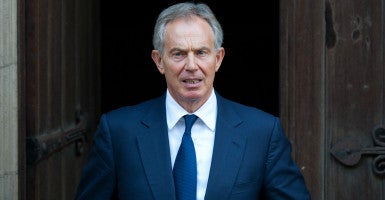 Asked why he dares speak about Islamist terrorism and extremism, given that the Obama administration insists that such mentions will alienate all adherents of the religion, Blair simply smiled and said, “Because that’s what it is.” (Photo: I-Images/ZUMA Press/Newscom)

Former British Prime Minister Tony Blair strode into Washington last week speaking urgently about the need to have a long-term strategy to defeat Islamist extremism on the ground as well as ideologically, with both superior military force and confident Western values.

It was as if he were a visitor not from the U.K., but from another planet. Washington is not exactly what you’d call a bustling wartime capital.

The Obama administration is, in fact, making the case that the proper response to current threats from ISIS is to tighten gun control laws, reduce carbon emissions, and double down on political correctness. These ideas are, moreover, being actively promoted by ideological allies in the media and the culture.

Such an approach is—to nobody’s surprise—failing spectacularly to rally the nation, which appears more divided than ever. Conservatives are stunned that anyone would want to disarm the citizenry at this point, that there are people who actually believe that climate change causes terrorism, and that a society can battle a jihadist ideology without proudly asserting an alternative, in this case the values of liberal democracy.

There would be some hope of a national conversation, a large Socratic dialogue of sorts, if sides were listening to each other. Very few liberals, however, listen to talk radio, watch Fox News, or read National Review or the editorial pages of The Wall Street Journal or The Federalist. They have no idea how divorced from reality their proposals can sound.

Conservatives, by contrast, are much better aware of the other side’s arguments. They are surrounded by NPR; The New York Times; and CBS, NBC, and ABC. They consume them as well, never mind the culture. Thus their consternation at what they are hearing, watching, or reading.

Blair, prime minister from 1997 to 2007, is no conservative; rather, he is a former Labour leader. He knows, however, what it’s like to fight a long war and, after many mistakes, be able to hand his successor a stable Iraq, which Vice President Joe Biden in 2010 referred to as the “greatest achievement.”

In his speech at the Library of Congress Thursday night, Blair did not go out of his way to pick a fight with President Obama or his administration, but neither did he shrink from answering questions forthrightly.

Asked by the moderator, former ambassador Martin Indyk, why he dares speak about Islamist terrorism and extremism, given that the Obama administration insists that such mentions will alienate all adherents of the religion, Blair simply smiled and said, “Because that’s what it is.”

“Those who believe in concepts of the caliphate and the apocalypse—so much part of Daesh [ISIS] propaganda—stretch deep into parts of Muslim societies,” Blair said. “A belief in innate hostility between Islam and the West is not the preserve of the few.”

“In many Muslim countries, large numbers also believe that the CIA or Jews were behind 9/11. Clerics who proclaim that non-believers and apostates must be killed or call for jihad against Jews have Twitter followings running into millions. … The ideology has deep roots. We have to reach right the way down and uproot it.”

At times, Blair’s criticisms of President Obama were indirect, as when he said that “sustained engagement over a period of time is preferable to a vacuum.”

“They have to be eliminated on the ground … to destroy the so-called caliphate.”

But it was when he spoke up for the all-important battle for ideas that Blair seemed to be more at odds with an administration and a president who seems to be apologetic at best and condemnatory at worst of Western civilization.

“We have to explain to our citizens and those coming in why our values and our way of life matter to us, and why we will defend them to the last,” said Blair. “We must recover our own confidence in our own belief system.”

Far from fearing being too strong lest the West alienate Muslims, Blair considers the reverse the real threat. “A continued failure to recognize the scale of the challenge and to construct the means necessary to meet it, will result in terrorist attacks potentially worse than those in Paris, producing a backlash, which then stigmatizes the majority of decent, law-abiding Muslims,” he said.

“Force alone will not prevail—the Islamist ideology also has to be confronted,” Blair added.

The chasm between this approach and the ideological pieties being espoused by the administration could not be wider. Obama’s comment that this week’s massacre in San Bernardino by terrorists who pledged allegiance to ISIS were “another tragic reminder that here in America it’s way too easy for dangerous people to get their hands on guns” and Attorney General Loretta Lynch’s remark that her “greatest fear” is anti-Muslim rhetoric seem downright dangerous.

As the Heritage Foundation’s Middle East scholar Jim Phillips put it Friday, “the long string of ISIS victories have given it an aura of invincibility” that has enabled it to attract 25,000 recruits from 80 countries.

President Obama’s decision to pull troops out of Iraq in 2010, against the military’s advice, has undermined what looked set to be a real achievement. Continuing not to take ISIS seriously or pay heed to Blair will only replicate the failure so far. As Pete Wehner put it this week, the president “may be hermetically sealed off from facts that are inconvenient to this worldview,” but “by ignoring the reality of things, he makes everything worse.”