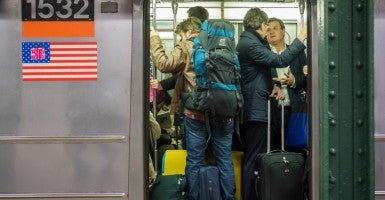 The Highway Trust Fund—which provides funding for building and maintaining the nation’s roads and bridges as well as transit, such as buses, streetcars, light rail and metros—will exhaust its operating funds by the end of May. Now more than ever, it is important for the nation to rethink the way it invests in transportation.

As Heritage Visiting Fellow Wendell Cox writes in his latest report, “America Needs a Rational Transit Policy,” the federal insistence on transit spending and other diversions—which constitute almost one-fifth of transportation spending—is not in tune with America’s transportation needs and consumer preferences. As Cox points out, when deciding how to divvy up limited resources it is against the nation’s interest to devote a large amount of federal money to expensive transit projects. Cox argues that Highway Trust Fund money would better be spent on road infrastructure for the following reasons:

Americans increasingly prefer to drive. From 1980 to 2012, transit’s share of commuter trips fell by nearly 20 percent, while driving alone has increased by the same amount. Even with a glut of federal money subsidizing urban transit, its all-day share of urban travel has fallen by 30 percent since 1982.

Transit is more expensive. Transit is a whopping 4 times as expensive per passenger mile as driving a car or SUV (including the cost of the car, operating costs, highway fees and government road expenditures).

Transit does not reduce congestion. Since 1982, urban traffic congestion has increased by 150 percent in the 52 metropolitan areas with populations over 1 million, despite the fixation with building rail systems in major cities.

Mobility is important for the economy. Research shows that metropolitan areas tend to experience stronger economic growth if residents can reach a larger percentage of the jobs in a short period of time (such as 30 minutes). Only cars can minimize travel times while providing maximum access to jobs. Indeed, auto commuters can reach ten times more jobs than transit commuters—and can reach those jobs in two-thirds of the time.

This is not to say that transit is an inherently inferior mode of transportation in all instances; mass transit performs well in six legacy cities, including New York, Chicago, Philadelphia, San Francisco, Boston and Washington.

Rather, sound policy would allow people to set their own transportation priorities instead of force federal money into transit programs that would not serve the population well. For this reason, states and localities should have the primary say in the transit projects that they build—not lawmakers and special interests in the District of Columbia.

Congress should keep this in mind when considering how to shore up the highway trust fund in May. A good approach would stop diversions that fund unnecessary transit projects instead of road maintenance, and would give states more authority to build the transportation infrastructure that best suits their needs. For more information on why the nation needs to rethink its current approach to transportation, see “America Needs a Rational Transit Policy”.