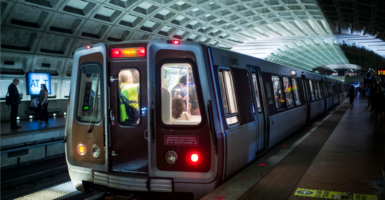 That was the message, via chants and boos, of Washington Nationals fans last week when the D.C. Metro system stopped running D.C.-bound trains around 11:40 pm, a full hour before the game ended. (To add insult to injury for fans, despite a stellar regular-season finish eight games atop their division, the Nats succumbed to the Los Angeles Dodgers by one run in the last of a five-game series.)

Boos and chants of “metro sucks!” when the @Nationals announce the last @wmata train pic.twitter.com/gKNR1p51sC

Prior to the game, the Nationals’ star pitcher Max Scherzer incredulously reacted to Metro’s decision not to provide service at the end of Nats’ games. “Isn’t it a supply-and-demand issue?” he wondered.

And he should be correct. In a normal free market, the vast demand for transportation to and from the game would leave private providers drooling to take advantage of the thousands of fare-paying fans seeking late night service. Indeed, many private services did ramp up their efforts to give Nats fans a way to get home.

Not so for Metro, whose officials are too busy protecting negligent employees, demanding more money from taxpayers, and playing catch-up for years of neglected maintenance to even consider providing an additional service that consumers would want.

And why would they consider providing additional service? Even though Metro has acknowledged its plummeting ridership (the lowest since 2009) is a direct result of its tanking service quality, it knows that taxpayers will always be there to pick up the tab.

Luckily, some local officials have been skeptical of sending more taxpayer funds to Metro until it shows some signs of improvement. Both Maryland and Virginia governors have refused to send additional revenues to the Washington Metropolitan Area Transit Authority until it shows that it has its act together.

Good for them. Lavishing more money on a system that operates with little consideration for riders’ basic safety or providing a modicum of reliability is a losing proposition. If the first infusion of cash does not yield improvement, Metro will simply claim that it was not enough and demand more.

Indeed, this is exactly what happened at the federal level. Metro is the only transit system in the country that receives direct appropriations of $150 million a year in addition to Federal Transit Administration grants that are doled out to the nation’s transit authorities.

These additional funds were supposed to bolster efforts to make up for years of neglecting the system’s aging infrastructure. Yet after years of these additional grants and $3.7 billion in maintenance spending, the situation has gotten worse.

To no one’s surprise, Metro leaders were promptly back in front of Congress demanding even more federal funding to address the issue. Instead of helping to fix things, these subsidies further mask the deeply ingrained structural problems with the D.C. Metro.

Though there’s plenty to be upset about, already-grieving Nationals fans were right to voice their frustration with Metro. But they’re far from the only ones who should do so. Until riders and local taxpayers demand accountability for Metro instead of more subsidies, the system will continue its dispiriting spiral at the public’s expense.