How the House’s Handling of Impeachment Hurts the American People 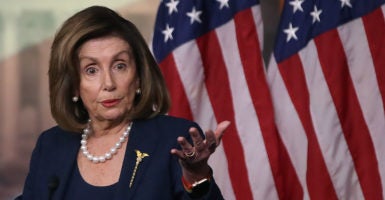 The partisan nature of this particular impeachment will end up weakening not just Trump, but the office of the presidency. Pictured: House Speaker Nancy Pelosi addresses reporters Jan. 16 during her weekly news conference on Capitol Hill. (Photo: Mark Wilson/Getty Images)

Whether the American people yet realize it or not, the House’s handling of the impeachment of President Donald Trump has inflicted serious damage on America’s constitutional system of government and threatened the very safety of our nation.

The partisan nature of this particular impeachment will end up weakening not just Trump, but the office of the presidency. Every future president—Democrat and Republican—will be second-guessing his or her decisions to avoid crossing members of Congress and being threatened with impeachment based on the flimsiest of evidence.

The latest alleged revelations from former national security adviser John Bolton don’t change the fact that last week, both lead House impeachment manager Rep. Adam Schiff and Senate Minority Leader Chuck Schumer admitted that the House voted to impeach the president without the evidence to prove he was guilty, demanding that the Senate call witnesses so they could do more evidence gathering.

When Congress uses impeachment as a political weapon, it has the potential of stripping an enormous amount of constitutional authority from the presidency and shifting it to Congress. The House has created a precedent where future executives will feel compelled to run major decisions by Congress before carrying them out—even decisions that are solely in the president’s purview.

The delay created while a president attempts to seek consent from Congress could cost American lives when quick, decisive actions are needed. Just think of the kind of havoc that could be wrought when such permission-seeking ends up delaying military action necessary to stop an attack on an American embassy, when it prevents counterterrorism measures required to thwart an imminent terrorist threat at home, or when it delays federal help to respond to a natural disaster threatening the lives of thousands of citizens.

The office of the president has suffered additional long-term harm when one considers that when Trump chose to invoke executive privilege to prevent his staff from testifying in the impeachment hearings, the House charged him with “obstruction of Congress.”

The long-held legal tradition of executive privilege allows a president to receive the best and frankest advice with which to make critical governing decisions, giving him and his staff the freedom to fully explore all sides of an issue.

Throughout my career, I was blessed to work in senior positions in both state and federal government, and I will say that those deliberations can be very messy—but also very effective.

To function effectively, a president needs the ability to consult confidentially with his closest advisers. Taking that privilege away severely limits a president’s ability to serve citizens, as his advisers will be deterred from providing frank advice for fear their communications will be shared with millions—including foreign powers and political adversaries—on the evening news.

If executive privilege is abused, Congress has the ability to take the president to court to challenge his claims. Yet the House failed to do that, perhaps surmising that, based on past precedent, the courts might disagree with it.

Instead, the House decided to charge the president with obstruction of Congress, despite the fact that executive privilege is a tool that many presidents have used and that the Supreme Court repeatedly has affirmed. Impeaching a president for invoking executive privilege essentially guts this important tool.

The Constitution’s Framers were very concerned that impeachment would be used as a political weapon, as is happening today. They never meant it to be the “no-confidence vote” of parliamentary systems that create turmoil by changing leadership anytime such a vote is called. Impeachment was meant for presidents who engaged in crimes so grievous that removing them from office couldn’t wait until the next election.

With this impeachment, the House has threatened our very constitutional system, effectively turning presidents into mere puppets of Congress, rejecting the idea of a separate and co-equal branch of government. In doing so, the House has damaged the unique system of checks and balances the Framers crafted to prevent any one branch of government from becoming too powerful.

The House also has made the American people the casualties in the process. The mere threat of impeachment may be all that is needed to stop future presidents from implementing policies that they know are popular with the people but unpopular with the opposition party in the House.

In the worst-case scenarios, presidents who become paralyzed in their decision-making about national security and natural disasters could end up putting Americans in harm’s way.

Only time will tell the extent of the damage that has been done.