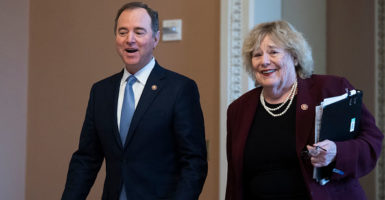 In their final day of arguments that the Senate should remove President Donald Trump from office, House Democrats questioned the president’s character and defended former Vice President Joe Biden.

The seven House Democrats who are impeachment managers, acting as prosecutors, used just over 21 of their allotted 24 hours before concluding their third day of arguments on the Senate floor.  The Senate adjourned just before 9 p.m.

After each side presents its case, the Senate will vote on whether to call witnesses to testify. It takes a two-thirds majority, or 67 senators, to remove a president from office.

Here are highlights from Day 3 of the Democrats’ arguments:

Rep. Adam Schiff, D-Calif., leader of the House managers, made an impassioned plea to the senators to put themselves “in someone else’s shoes,” in this case, those of Joe Biden.

Let’s imagine the most powerful person in the world was asking a foreign nation to conduct a sham investigation into one of us.

In 2016, Biden, as vice president, threatened to withhold $1 billion in U.S. aid from Ukraine unless the Eastern European nation fired Viktor Shokin, the state prosecutor who was investigating the Ukrainian energy company Burisma Holdings.

Hunter Biden, the vice president’s son, held a high-paying job on the board of Burisma at the same time his father was the Obama administration’s point man for Ukraine policy.

In a July 25 phone call between Trump and Ukrainian President Volodymyr Zelenskyy, the two men briefly discussed Trump’s interest in Ukraine’s investigating the matter along with Ukraine’s possible meddling in the 2016 U.S. election.

At the time, unknown to Zelenskyy, Trump had put a hold on $391 million in congressionally approved military aid to Ukraine to counter Russian aggression, which he would lift in September.

Both presidents say there was no pressure on Ukraine to begin investigations.

During his argument Friday on the Senate floor, Schiff brought up former U.S. Ambassador to Ukraine Marie Yovanovitch, who Trump recalled to the United States on May 20, the day of Zelenskyy’s inauguration. Yovanovitch continues to work for the State Department.

Schiff warned that Trump likely wouldn’t be loyal to his own Republican allies in the Senate if it didn’t benefit him.

“If somewhere deep down below, you realize that he would, you cannot leave a man like that in office when he has violated the Constitution. It shouldn’t matter that it was Joe Biden. It could have been any of us. It may be any of us,” he said.

Schiff later added, referring to the elder Biden: “Yes, he’s running for president. He’s still a U.S. citizen, and he deserves better than that.”

Rep. Hakeem Jeffries, D-N.Y., said Trump’s conduct represented an assault on the character of the country.

“There’s a toxic mess at 1600 Pennsylvania Avenue, and I humbly suggest that it’s our collective job on behalf of the American people to try to clean it up,” Jeffries said. “President Trump tried to cheat. He got caught, and then he worked hard to cover it up.”

Jeffries went so far as to talk about impeachment in the context of the Civil War, the Great Depression, World War II, the Jim Crow era, and the terrorist attacks of Sept. 11, 2001.

“America is a great country. We can handle adversity better than any other nation in the world, but what are we going to do about our character?” Jeffries asked, adding:

President Trump tried to cheat and solicit foreign interference in an American election. That is an attack on our character.

President Trump abused his power and corrupted the highest office in the land. That is an attack on our character.

President Trump tried to cover it all up and hide it from the American people and obstruct Congress. That’s an extraordinary attack on our character.

Schiff later made a similar point.

“You don’t realize how important character is in the highest office in the land until you don’t have it, until you have a president willing to use his power to coerce an ally to help him cheat, to investigate one of our fellow citizens,” Schiff said.

Rep. Jerry Nadler, D-N.Y., an impeachment manager who is chairman of the House Judiciary Committee, called Trump “a dictator” who must be removed for not cooperating with the House’s impeachment inquiry.

“President Trump is an outlier. He’s the first and only president to declare himself unaccountable and to ignore subpoenas backed by the Constitution’s impeachment power,” Nadler said, adding:

Nadler, not mentioning that House Democrats didn’t try to enforce their subpoenas through the courts, also said:

“This defense would be laughable if this issue wasn’t so serious,” Crow said on the Senate floor, in anticipation of an argument the president’s lawyers will make. “No, the delay wasn’t meaningless. Just ask the Ukrainians sitting in trenches now.”

Crow suggested that former national security adviser John Bolton, who Democrats want as a witness in the trial, might have quit because of the hold on aid to Ukraine.

“Ambassador Bolton could shed light on that himself if he were to testify,” Crow said.

Schiff also noted, while on the Senate floor, the huge reliance Ukraine had on the United States, which provides 10% of the country’s military budget.

“Withholding aid has real consequences on real soldiers and their families,” Schiff said, adding the hold only “emboldened Russia.”

Trump ultimately followed through on military aid to Ukraine to defend itself from Russia, while President Barack Obama did not, Trump’s defenders note.

Chief Justice John Roberts is presiding over the trial, as is his constitutional duty. Going back to his confirmation hearing, Roberts generally has said he only calls balls and strikes.

However, on Friday, Schiff broached the subject of having Roberts make the final decision on calling witnesses. Most reports indicate the 45 Senate Democrats and two independents will have a tough time getting four Republicans to join them for a majority to vote for calling witnesses.

“We have a very capable justice sitting in that Senate chamber empowered by the Senate rules to decide issues of evidence and privilege,” Schiff told reporters. “So if any of these witnesses have a colorable claim that they wish to make or the president on their behalf, we have a justice that is able to make those determinations.”

Crow said he was anticipating the arguments of the president’s defense team, set to begin Saturday.

“Now since we won’t have an opportunity to respond to the president’s presentation, I want to take a minute to respond to some of the arguments that I expect them to make,” Crow said.

The Colorado Democrat said the president’s lawyers likely will say that Ukraine eventually got the $391 million in security assistance from the U.S.

“Regardless of whether the aid was ultimately released, the fact that the hold became public sent a very important signal to Russia that our support was wavering,” Crow said. “The damage was done.”

Crow warned senators that the Trump defense team will “cherry-pick” evidence and advised: “Don’t be fooled.”

Ukraine received the $391 million in military aid only after news broke of a whistleblower complaint about the Trump-Zelenskyy phone call, he said.

“The scheme was unraveling. He only released it after he got caught,” Crow said of Trump.

Schiff dismissed the often-repeated line from Trump defenders that the president had sought to address corruption in Ukraine before delivering the aid.

7. Making the Case for Obstruction

Trump’s refusal to cooperate with impeachment investigators could set a dangerous precedent, Rep. Zoe Lofgren, D-Calif., told senators, in arguing for removing the president from office for obstruction of Congress.

“All presidents after him with have veto power over Congress’ ability to conduct oversight and the power of impeachment,” Lofgren said.

“The House was not prepared to accept that, and that’s why the House approved Article 2,” she said, referring to the House’s second article of impeachment.

Over two days of arguments, the seven House impeachment managers prosecuted the case for abuse of power against Trump. The first three hours of Friday’s proceedings closed out their arguments for that first article of impeachment.

Just before 5 p.m., Democrats began arguing that the Senate should remove Trump from office for obstruction of Congress, charging that the president didn’t cooperate with the House’s impeachment investigation.

The House sent several subpoenas during the investigation. Cipollone, the White House counsel, wrote a letter to House Speaker Nancy Pelosi in October saying that the White House would not provide any documents or witnesses.

The letter asserted that the impeachment investigation was an attempt both to overturn the results of the 2016 election and to influence the outcome of the 2020 contest.

The House subpoenaed White House acting chief of staff Mick Mulvaney and various other officials, but not Bolton.

“In the history of our republic, no president ever dared to issue an order to prevent even a single government witness from testifying in an impeachment inquiry,” Lofgren said.

“President Trump abused the power of his office by using his official power in an attempt to prevent every single person who works in the executive branch from testifying before the House,” she said.

In fact, the House Permanent Select Committee on Intelligence, which led the investigation, identified 17 current and former Trump administration officials who either were deposed behind closed doors or gave public testimony.

Trump made no attempt to cooperate with the House investigation, said Rep. Sylvia Garcia, D-Texas, a former state judge.

“At President Trump’s order, agencies and offices refused to produce documents in response to the committee’s request,” Garcia said. “They refused to allow individual witnesses to do so either.”

“So let’s recap. No documents. Zero, goose eggs, nada, in response to over 70 requests and five subpoenas.”

No attempt to negotiate. No genuine attempt to accommodate. Categorial, indiscriminate, and unprecedented stonewalling. Again, never in my time as a lawyer or as a judge have I seen this kind of total disrespect and defiance of a lawfully issued subpoena, and all on President Trump’s orders.

This report was updated to include later developments.