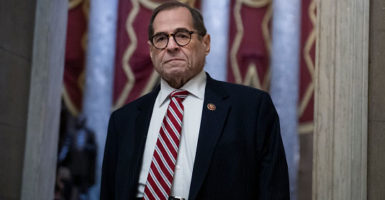 House Democrats on Thursday, in the impeachment trial of President Donald Trump, argued that a crime isn’t necessary to remove a president from office and doubled down on their defense of Joe and Hunter Biden.

The seven House Democrats who are the impeachment managers, including Reps. Adam Schiff of California and Jerry Nadler of New York, have three days, with up to 24 hours, to make their arguments.

After a deeply partisan fight over Senate trial rules on Tuesday and speaking for about two hours in Wednesday’s opening argument, Schiff, the lead impeachment manager, was more lighthearted Thursday.

After Chief Justice John G. Roberts opened the day’s session, he said House impeachment managers have 16 hours and 42 minutes left to make their case to the Senate “jurors.”

“I am not sure the chief justice is fully aware of just how rare it is, how extraordinary it is, for the House members to be able to command the attention of senators sitting silently for hours—or even for minutes, for that matter,” he said. “Of course, it doesn’t hurt that the morning starts out every day with a sergeant-at-arms warning you that if you don’t, you will be imprisoned.”

“Common sense will tell us that this allegation against Joe Biden is false,” Garcia said, adding, “President Trump asked for the investigation into Biden, based on a made-up theory that no one agreed with—no one.”

In 2016, Joe Biden, as vice president, threatened to withhold $1 billion in U.S. aid from Ukraine unless the Eastern European nation fired Viktor Shokin, the prosecutor investigating Burisma Holdings. Hunter Biden held a high-paying job on the board of  Burisma at a time when his father was the Obama administration’s point man for Ukraine.

Garcia said Trump wasn’t interested in the Biden allegations in 2017 or 2018, but only became interested in 2019, after Joe Biden became a presidential candidate.

“Vice President Biden’s conduct was uniformly validated by the witnesses in the House investigation, who confirmed his conduct was consistent with U.S. policy,” she said.

Garcia’s adamant defense of the Bidens opened the door to call them as witnesses, tweeted Sen. Josh Hawley, R-Mo., so the Senate can get answers.

“WOW, House managers make extended argument that Hunter Biden’s work w/ Burisma entirely appropriate & no conflict of interest w/ Joe Biden getting rid of prosecutor that had jurisdiction over Burisma,” Hawley said. “If we call witnesses, gonna need to hear from both Bidens.”

Democrats spent most of Thursday homing in on the first impeachment article; specifically, abuse of power.

“Since President George Washington took office in 1789, no president has abused his power in this way,” he said. “Let me say that again: No president has ever used his office to compel a foreign nation to help him cheat in our elections. Prior presidents would be shocked to the core by such conduct.”

Trump has made frequent references to his record, reaching all the way back to George Washington, albeit typically in a more favorable way.

A July 25 phone conversation between Trump and Ukrainian President Volodymyr Zelenskyy led to the Democrat-controlled House’s voting, without support from a single Republican, to impeach Trump for alleged abuse of power and obstruction of Congress.

During their call, Trump and Zelenskyy referred to Hunter Biden’s highly paid role on the board of Burisma at a time when his father, then the vice president, was the Obama administration’s point man on Ukraine policy.

According to a White House transcript of the call released by the president, Trump asked Zelenskyy “to look into” Joe Biden’s admission that he forced the firing of a Ukrainian state prosecutor—Shokin—who was investigating Burisma.

Nadler followed with another presidential comparison.

“This presidential stonewalling of Congress is unprecedented in the 238-year history of our constitutional republic. It puts even President [Richard] Nixon to shame,” Nadler said. “Taken together, the articles and the evidence conclusively establish that President Trump has placed his own personal political interests first. He has placed them above our national security, above our free and fair elections, and above our system of checks and balances.”

4. Abuse of Power and Prior Impeachments

Nadler later defended the history of the term “abuse of power,” a charge often criticized as being too vague.

“All prior impeachment considered of high office have all included abuse of power,” Nadler said, and referred to the impeachment investigations of Presidents Andrew Johnson, Nixon, and Bill Clinton.

However, even left-leaning CNN fact-checked that comment and noted that abuse of power was not one of the 11 impeachment articles against Johnson in 1868. The House Judiciary Committee passed three articles of impeachment against Nixon in 1974, one of which was abuse of power. Nixon resigned the presidency before the full House voted.

The House Judiciary Committee, then run by Republicans, voted out four articles of impeachment against Clinton, a Democrat, in 1998, which included one for abuse of power. The full House only approved two impeachment articles, rejecting the abuse of power charge. The Senate acquitted Clinton in a 1999 trial.

Nadler focused heavily on what he called the “ABCs of impeachment.”

“Abuse. Betrayal. Corruption. Here are each of the core offenses the Framers [of the Constitution] feared most,” Nadler said. “The president’s abuse of power, his betrayal of the national interest, and his corruption of our elections plainly qualify as great and dangerous offenses.”

Nadler said Trump abused his power by using the clout of his office to “solicit and pressure Ukraine to meddle in our elections.”

Regarding betrayal, the New York Democrat said, “He betrayed vital national interests; specifically, our national security, by withholding diplomatic support and military aid from Ukraine even as it faced armed Russian aggression.”

Regarding corruption, Nadler said, “President Trump’s intent was to corrupt our elections to his personal political benefit.”

“Article One thus charges a high crime and misdemeanor that blends abuse of power, betrayal of the nation, and corruption in elections into a single, unforgivable scheme,” he said. “That is why this president must be removed from office, especially before he continues his effort to corrupt our next election.”

Nadler explained that some Trump defenders note that neither article of impeachment is based on a criminal statute.

“In a last-ditch legal defense of their client, the president’s lawyers argue that impeachment and removal are subject to statutory crimes or to offenses against established law, that the president cannot be impeached because he has not committed a crime,” he said.

“This view is completely wrong. It has no support in constitutional text and structure, original meaning, congressional presence, common sense, or the consensus of credible experts. In other words, it conflicts with every relevant consideration,” he continued.

During his presentation, Nadler showed video from one of Trump’s chief advocates, Sen. Lindsey Graham, R-S.C., and one of the president’s lawyers, Alan Dershowitz.

According to several reports, Graham had left the Senate chamber before a 1999 video clip in which he was featured was displayed.

The clip showed Graham, then a member of the House, on the Senate floor, acting as a House manager in the Clinton impeachment trial, explaining what he thought a “high crime” was.

“What’s a high crime? How about if an important person hurts somebody of low means? It’s not very scholarly, but I think it’s the truth. I think that’s what they meant by high crimes,” Graham said in the 1999 video. “Doesn’t even have to be a crime. It’s just when you start using your office, and you’re acting in a way that hurts people, you have committed a high crime,” Graham said in the clip.

“It certainly doesn’t have to be a crime,” Dershowitz said of impeachment. “If you have somebody who completely corrupts the office of president and who abuses trust and who poses great danger to our liberty, you don’t need a technical crime.”

Rep. Val Demings, D-Fla., laid out the case about an alleged conspiracy by Trump’s inner circle and his personal lawyer, former New York Mayor Rudy Giuliani, and Giuliani associate Lev Parnas, who was indicted and recently spoke out against Trump.

She attempted to play a recording of a voicemail between Giuliani and Parnas, but the audio didn’t work.

“Well, I was going to say it’s difficult to hear, but I’m sure you cannot hear that at all,” Demings said.

“According to phone records, Mr. Giuliani had a one-minute, 50-second call,” Demings, a former Orlando, Florida, police chief said. “Fifteen minutes after they hung up, the records also show that Mr. Giuliani placed three short phone calls to the White House. Shortly thereafter, the White House called Giuliani back. Giuliani spoke with someone at the White House for eight minutes and 28 seconds.

“I will just quickly note that at the time … the Intelligence Committee issued its report in mid-December, we did not know that eight-minute, 28-second call was from the White House.”

She said neither the White House nor Giuliani provided a recording or transcript of the call.

Demings said that Trump recalled Marie Yovanovitch from her job as ambassador to Ukraine out of fear that Yovanovitch, a holdover from the Obama administration, would stop the investigations of the Bidens and into suspected Ukraine election meddling in 2016.

Yovanovitch remains employed with the State Department at no change in pay and teaches at Georgetown University. But Demings said the ambassador’s removal created uncertainty among U.S. diplomats and State Department officials.

“So, why did President Trump remove a distinguished career public servant and an anti-corruption crusader and a top diplomat in the State Department?” she asked rhetorically.