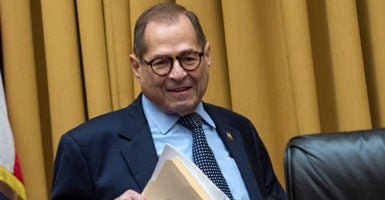 A rivalry that goes back to the mid-1980s culminates this week as Jerry Nadler presides over the next round of House Democrats’ impeachment hearings targeting Donald Trump.

What started as a spat in which a New York state legislator tried to block a New York real estate mogul’s construction of luxury apartments has morphed into a scene of raw politics in which the chairman of the House Judiciary Committee is trying to impeach the president of the United States.

But the two Manhattan dwellers, born a year and a day apart, had monumental clashes before Trump took office as president.

At one point, Nadler mocked the number of times Trump went into bankruptcy, and Trump characteristically called Nadler “fat” and “stupid.”

Here’s a look at three confrontations between Nadler and Trump long before the impeachment inquiry, and why that inquiry appears personal as Nadler’s committee takes up the recommendations of the House Intelligence Committee.

1. The Battle Over ‘Trump City’

The fight over Trump’s development of an apartment complex at Penn Rail Yards in Nadler’s West Side Manhattan legislative district stretched from the mid-1980s into the 1990s after Nadler was elected to Congress and continued to oppose the project.

As it turns out, the saga of “Trump City” also came to involve another key character in the present impeachment saga—Rudy Giuliani. It also included Andrew Cuomo long before he was governor.

Earlier this year, well before the Ukrainian scandal emerged, Trump tweeted about the project and his rivalry with Nadler.

Congressman Jerry Nadler fought me for years on a very large development I built on the West Side of Manhattan. He wanted a Rail Yard built underneath the development or even better, to stop the job. He didn’t get either & the development became VERY successful. Nevertheless…

I got along very well with Jerry during the zoning and building process. Then I changed course (slightly), became President, and now I am dealing with Congressman Nadler again. Some things never end, but hopefully it will all go well for everyone. Only time will tell!

Trump first proposed the project in the mid-1980s and, uncharacteristically, said he didn’t want his name on the development that he envisioned calling “Television City.” The plan included a skyscraper, 150-story residential tower, TV studios, a shopping mall, and a park.

Trump anticipated that his building would be larger than the Sears Tower in Chicago and would be the “greatest ever” and “most important” project in New York City, according to Real Clear Politics.

Trump tried to lure NBC, which would later air his hit reality show, “The Apprentice.” But a group of community activists opposed the project, calling it “tacky” and “overbearing.”

Nadler, then a member of the New York State Assembly, sided with residents of his district. He worked with then-New York Mayor Ed Koch to offer NBC tax abatements to keep the network in Rockefeller Center, Newsday reported.

In 1992, Nadler was elected to the U.S. House of Representatives and would become a key obstacle when Trump sought federal aid for his project.

As the matter dragged on, Trump settled a lawsuit with residents by agreeing to scale back the project so that it no longer would include the TV studios or the skyscraper. It would be called “Trump City,” later renamed “Trump Place.”

But Trump sought help from the federal government when his businesses faced financial trouble in the 1990s.

Although Trump City was a luxury apartment complex, the future president offered some units for low- and moderate-income housing to qualify for $355 million in low-interest mortgage insurance loans from the Department of Housing and Urban Development. He also needed a blight designation for the property under Section 220, a federal urban renewal program.

That’s where New York Mayor Rudy Giuliani’s administration came in for the assist. The city’s Department of House Preservation granted the blight designation sought by Trump.

Nadler again intervened, lobbying Cuomo and other HUD officials to deny the loan guarantees. His public letter to HUD also contested the blight designation, saying: “In fact, the particular site in question lies in the heart of one of the wealthiest, fastest growing, thriving areas of the City, if not the entire nation.”

Trump also sought to move part of the West Side Highway construction to make room for his development, which would have cost $350 million in federal highway dollars. The highway, if not rerouted, would impede access to Trump’s planned waterfront park along the Hudson River.

Nadler called this a “sin against taxpayers” and, in 1995, sponsored a provision to block the federal funding, a measure that gained bipartisan backing.

Trump, in an interview with New York magazine, lashed out against Nadler, saying he didn’t really want the highway moved anyway.

“Fat Jerry Nadler is doing me a favor,” Trump said. “He’s too stupid to realize it. He’s making me a lot of money.”

Trump made the “fat” remarks before Nadler’s stomach reduction surgery in 2002, when the New York congressman reportedly weighed 338 pounds.

Eventually, Trump’s apartment project became smaller again, losing the planned waterfront park. Nadler mocked the result, according to The New York Times, calling it a $10 million-an-acre “private backyard for the people who live in these buildings.”

Trump, who eventually built the project after 1997, said Nadler was “dumb” and should go on a diet.

A Nadler spokesman shot back: “If Mr. Trump thinks Mr. Nadler is so dumb, we would ask why Nadler never went bankrupt and had to spend his father’s fortune to keep his family’s business afloat.”

In 2000, when Trump flirted with running for president as the Reform Party candidate, he released a book, “The America We Deserve,” that called Nadler “one of the most egregious hacks in politics.”

Although Trump didn’t run after all that year, or in 2012, he entered the 2016 presidential campaign as a Republican.

“When do you plan on returning the taxpayer money that was designated to ease the suffering of our city’s small business owners?” Nadler wrote on the letterhead of his congressional reelection campaign.

After the terrorist attacks of Sept. 11, 2001, that brought down the World Trade Center, many New York businesses got federal aid.

A Trump property, 40 Wall Street LLC, received $150,000 in federal assistance for small business. This particular company, part of the larger Trump Organization, employed 28 and had about $27 million in annual revenue, according to Nadler’s letter.

“In grabbing that money with both fists, you took it out of the pockets of small business owners in New York who were truly hurting, and prevented them from taking full advantage of the relief so generously offered by their fellow citizens,” Nadler wrote.

Nadler seemed to want to poke at Trump’s ego.

“You claim to be one of the biggest, richest, most successful developers in the city—yet you took taxpayer money from a grant program designed to help the ‘little guys.’ Do you really consider yourself a small businessman? You have staked your reputation and your campaign on being anything but,” Nadler wrote.

3. ‘We Cannot Wait Four Years to Vote Mr. Trump Out of Office’

Trump, of course, surprised many with his election as president in November 2016.

It was much less surprising that Nadler won reelection in his congressional district. He issued a long statement from his campaign office claiming that Trump would undermine 240 years of American institution.

“Now more than ever, with a President-elect who threatens to undermine and even delegitimize those institutions—and in doing so, to damage the very soul of our liberal democracy—I implore everyone to help our country help itself,” Nadler said.

In the first two years of the Trump presidency, Nadler warned against impeachment unless it had bipartisan support. However, his post-2016 election statement said it wasn’t enough to wait to defeat Trump in 2020.

“We cannot wait four years to vote Mr. Trump out of office, as members of the GOP Senate and House Majorities have already stated that they will facilitate the Trump agenda, even if they weren’t supporters of his during the campaign,” Nadler said in the statement.

Nadler’s post-election message continued to call for Americans to correct the news media during the Trump presidency  when Trump coverage wasn’t hostile enough.

“The first order of business must be to refuse to allow the normalization of Trump,” Nadler said, later advising: “Write letters to media editors every time you see an article or broadcast that utilizes a normalizing tone or doesn’t make note of the extreme nature of Trump, his behavior and rhetoric, or his Administration’s actions.”