Rep. Adam Schiff, Trump’s Nemesis, Is 2-0 So Far on Impeachment 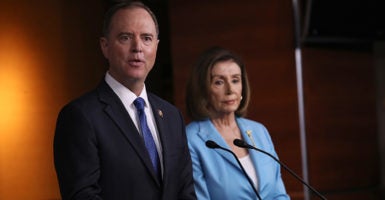 Rep. Adam Schiff, the House committee chairman who has taken the lead role in Democrats’ impeachment inquiry into President Donald Trump, has one big thing going for him.

The California Democrat is 2-0 on the impeachment battlefield so far, after leading a panel that secured House impeachments of two federal judges in 2009 and 2010, respectively. One judge’s ouster was completed over a month’s time, while the process for the other took two years to wrap up.

Schiff also led the prosecution team in the Senate trials, which saw one judge removed from office and the other resign before the trial got far.

Only 15 federal judges in U.S. history have been impeached, and Schiff played a key role in two of those cases.

Now, the congressman whose 28th Congressional District includes West Hollywood, Burbank, and parts of Pasadena is among the leading figures in what could be the third impeachment of a president in U.S. history: President Donald Trump for his interaction with Ukranian President Volodymyr Zelenskyy.

If the House impeaches Trump, Schiff likely will be among the managers in the Senate trial that follows, said Hans von Spakovsky, senior legal fellow at The Heritage Foundation, who in 2010 observed and wrote about the most recent impeachment trial for a judge.

“From his prior experience, you would think that Schiff would understand how serious a matter like this is,” von Spakovsky told The Daily Signal. “I’m still just shocked and dismayed by his behavior at that intelligence hearing where he made up a satirical parody [of Trump’s July 25 phone conversation with Zelenskyy] and read it out as if it was real. That to me shows he’s got the wrong attitude about this, and he is letting his personal dislike of the president interfere with his constitutional duties.”

Schiff has come under scrutiny in recent weeks, first for the incident von Spakovsky describes, in which the California Democrat mischaracterized the conversation between Trump and the Ukranian president. Only after being criticized did the committee chairman say his performance was “parody.”

Several fact-checkers also took Schiff to task for not telling the truth when he said neither he nor his office had previous contact with the whistleblower in the case.

FactCheck.org said Schiff was “wrong.” The Washington Post gave him “four Pinocchios,” the highest rating for a lie. PolitiFact ranked his claim as “false.”

The Case of Judge Thomas Porteous

Schiff’s first participation in an impeachment began in June 2008, when the Judicial Conference of the United States, the federal policy-making body for the courts, issued a scathing report on U.S. District Judge Thomas Porteous of the Eastern District of Louisiana, a 1994 appointee of President Bill Clinton.

The judge was accused of presiding over a trial in which lawyers involved had given him money and gifts, using a false name on bankruptcy forms in 2001, and filing false statements under oath with a bankruptcy court.

The House passed a resolution in September 2008 to establish a special investigation of Porteous. Then-House Judiciary Chairman John Conyers, D-Mich., named Schiff as chairman of the task force and Rep. Bob Goodlatte, R-Va., as ranking member.

As a procedural matter, the House voted again in January 2009 to adopt another resolution to reestablish the 12-member task force after the mission lapsed with the previous Congress.

But the House investigation of Porteous was interrupted by another urgent judicial matter.

The Case of Judge Samuel Kent

In the middle of the impeachment process for Porteous, another case erupted when U.S. District Judge Samuel Kent of the Southern District of Texas was accused of sexual misconduct in August 2008.

Kent pleaded not guilty to five related charges. However, he pleaded guilty the next month to obstruction of justice in connection with making false statements to a special investigative committee of the United States Court of Appeals for the 5th Circuit.

The guilty plea on obstruction allowed Kent to avoid prosecution on the other charges. As part of the plea, though, he admitted to engaging in nonconsensual sexual contact with two court employees.

Kent, appointed by President George H.W. Bush in 1990, was sentenced to 33 months.

The House task force had begun hearings with Kent’s alleged victims on June 2, 2009. He announced he would resign—on June 1, 2010, which would have allowed him to continue collecting his salary for a year. Kent reported to prison on June 15, 2009.

Kent’s lawyer, Dick DeGuerin, said his client set the 2010 date because “it will take at least that long for Congress and the Senate to go through all of the motions for impeachment.”

That presumption was incorrect.

The House’s Schiff-Goodlatte task force recommended four articles of impeachment against Kent on June 9. The House Judiciary Committee unanimously voted to send the articles to the House floor the next day.

No one voted against impeachment, although Rep. Mel Watt, D-N.C., voted present for one charge.

“It is regrettable that we must use the extraordinary remedy of impeachment to remove a member of the federal bench,” Schiff said after the vote. “But Judge Kent’s deplorable conduct leaves us no alternative. That he would still cling to the bench from the confines of his prison cell, and ask the public whose trust he has already betrayed to continue paying his salary, demonstrates how little regard he has for the institution he was supposed to serve.”

On June 25, when Senate staffers traveled to a prison to present Kent with a summons to testify, the judge gave them a handwritten resignation note. This time the resignation was effective June 30, 2009.

The Rest of the Porteous Case

Even with Kent’s case out of the way, the House task force didn’t hold the first hearing on Porteous until November 2009 and didn’t hear testimony until December.

Porteous sued to stop or delay the proceedings, alleging the process infringed on his Fifth Amendment right against self-incrimination by giving other witnesses immunity to testify for his impeachment but not giving the judge the same immunity from his own impeachment. The court dismissed the lawsuit.

After the probe, the panel voted 8-0, with four members not present, to recommend impeachment on Jan. 21, 2010.

“His long-standing pattern of corrupt conduct, so utterly lacking in honesty and integrity, demonstrates his unfitness to serve as a United States district court judge,” Schiff said of Porteous, echoing one of the charges.

The House Judiciary Committee voted unanimously on Jan. 27, 2010, to send four articles of impeachment to the full House.

The charges were 1) “engaging in a pattern of conduct that is incompatible with the trust and confidence that is placed in him as a federal judge;” 2) “engaging in a longstanding pattern of corrupt conduct that demonstrates his unfitness to serve as a United States District Court Judge;” 3) “knowing and intentionally making false statements, under penalty of perjury, related to a personal bankruptcy filing and violating a bankruptcy court order;” and 4) “knowingly [making] material false statements about his past to the United States Senate and to the Federal Bureau of Investigation (FBI) in order to obtain the position as United States District Court Judge.”

The offenses alleged in the articles of impeachment occurred before Porteous was a federal judge, but also were related to his Senate confirmation.

On March 11, 2010, the full House voted unanimously for an impeachment resolution targeting Porteous.

The Senate trial, the first full trial since Clinton’s 1999 impeachment, began in September 2010. Schiff and Goodlatte argued the case before the Senate Impeachment Trial Committee, a special committee named to hear the case.

The Senate easily reached the needed two-thirds vote, or 67 senators. All but one article of impeachment got more than 90 votes. The closest was a 69-27 vote on the more vague charge that the judge engaged in a longstanding pattern of corrupt conduct demonstrating his unfitness.

“Judge Porteous engaged in a persistent pattern of corruption throughout his career, on both the state and federal bench,” Schiff said after the Senate vote. “Allowing him to remain a judge would have eroded public confidence in the courts and made a mockery of the federal judiciary. I have great admiration for how the Senate conducted the trial, which was eminently fair to both sides, and the House is grateful that a corrupt judge has now been removed.”

Schiff’s press office did not respond to The Daily Signal’s phone and email inquiries Monday for this report.

The two judicial impeachment cases shed little light on how Schiff is likely to conduct the case against Trump, von Spakovsky said.

“He’s acting totally contrary to how he acted before. Those two federal judges being impeached, that was very much a bipartisan matter,” von Spakovsky said. “It was very clear those judges engaged in wrongdoing. Both parties realized that. They took the proper steps to remove them.”

“And yet here Schiff is acting in a very non-bipartisan way,” the legal expert said. “You would think he would know better.”