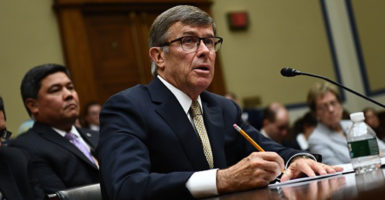 Acting Director of National Intelligence Joseph Maguire testified before the House Intelligence Committee on Thursday, as the Democratic majority in the House of Representatives moves ahead with a broad multi-committee impeachment inquiry against President Donald Trump.

Maguire explained the procedure for why a whistleblower’s complaint about the July 25 call between Trump and Ukrainian President Volodymyr Zelenskyy wasn’t immediately reported to Congress.

They discussed allegations that Biden used his role when vice president to threaten the withholding of aid to Ukraine’s government if it did not fire a prosecutor investigating Ukraine energy firm Burisma, of which Hunter Biden was a board member and was reportedly being paid $50,000 per month.

The discussion also occurred as the Trump administration had delayed $391 million in military aid to Ukraine. Congress had approved the funds for fiscal 2019. The Trump administration first told Congress it would release the funds to Ukraine on Feb. 28, and later said it would do so on May 23. The funds were not released until Sept. 11, a month and a half after Trump’s call to the Ukrainian president.

The partially redacted whistleblower complaint released ahead of the hearing shed some light on the matter.

The following are seven highlights from the hearing.

“We’ve been very good to your country, very good,” Schiff said when pretending to be Trump in his opening remarks. “No other country has done as much as we have. But, you know what? I don’t see much reciprocity here. I hear what you want. I have a favor I want from you, though. And, I’m going to say this only seven times, so you better listen good.”

Schiff continued portraying Trump, using language that was not in the transcript made public Wednesday.

And I’m going to put you in touch with [Rudy Giuliani, the president’s personal lawyer]. You’re going to love him. Trust me. You know what I’m asking, so I’m only going to say this a few more times in a few more ways. And, by the way, don’t call me again. I’ll call you when you’ve done what I’ve asked.

“It would be funny if it wasn’t such a graphic betrayal of the president’s oath of office,” the California Democrat continued. “As it does represent a real betrayal, there is nothing the president says here that is in America’s interest, after all.”

However, other members of the committee called Schiff out for kicking off the hearing saying something that wasn’t factual.

“While the chairman was speaking, I actually had someone text me: ‘Is he just making this up?’ Yes, yes, he was,” Rep. Mike Turner, R-Ohio, said.

“Sometimes fiction is better than the actual words or the text. Luckily, the American people are smart, and they have the transcript. They’ve read the conversation,” Turner said. “They know when someone is just making it up. We’ve seen this movie before. We’ve been here all year on litigating impeachment, long before the July 25 conversation.”

Schiff insisted that he was using humor.

“My summary of the president’s call was meant to be at least part in parody,” Schiff said. “The fact that that’s not clear is a separate problem in an of itself. Of course, the president never said, ‘If you don’t understand me, I’ll say it seven more times.’ My point is, that’s the message the Ukraine president was receiving, in not so many words.”

“It’s a shame that we started off this hearing with fictional remarks, the implication of a conversation that took place between a president and a foreign leader, putting words into it that did not exist, that are not in the transcript,” he said, adding:

I would contend those were intentionally not clear. The chairman described it as parody, and I don’t believe this is the time or the place for parody, when we are trying to seek facts.

Nor do those who were involved in the conversation agree with the parody the chairman gave us. Unfortunately today, many innocent Americans are going to turn on their TV, and the media [are] only going to show that section of what the chairman had to say.

Later in the hearing, when referring to the whistleblower complaint, Rep. Elise Stefanik, R-N.Y., said, “On page one, I’m not going to improvise for parody purposes like the chairman of this committee did. I’m going to quote it directly, on page one, the complaint reads, ‘I was not a direct witness to most of the events described.’”

The whistleblower complaint to the intelligence community’s inspector general, Michael Atkinson, was cited and quoted throughout the hearing by several committee members.

The whistleblower complaint says, “In the course of my duties, I have received information from multiple U.S. government officials that the president of the United States is using the power of his office to solicit interference from a foreign country in the 2020 U.S. election.”

The whistleblower says, “I was not a direct witness to most of the events described,” but wrote that “more than half a dozen U.S. officials have informed me of various facts.”

The Aug. 12 complaint about the July 25 call continued:

The complaint goes on to say U.S. officials thought Ukraine officials were led to think that future communications and cooperation between the countries were contingent on whether Ukraine would “play ball” in investigating Biden.

The inspector general, appointed by Trump, concluded in an Aug. 26 letter to Maguire that the matter reached the threshold of an “urgent concern” that should be reported to Congress.

Atkinson, who is generally referred to as the “ICIG”—short for intelligence community inspector general—in formal documents, did raise a concern in his cover letter to the complaint.

“Further, although the ICIG’s preliminary review identified some indicia of an arguable political bias on the part of the complainant in favor of a rival political candidate, such evidence did not change my determination that the complaint relating to the urgent concern ‘appears credible,’ particularly given the other information the ICIG obtained during the preliminary review,” the inspector general wrote.

Turner, while noting what the transcript actually said, asserted that he was not happy with Trump, a fellow Republican, talking about a political opponent with a foreign leader.

Still, he said, the transcript didn’t quite reflect the complaint.

Turner said calls for impeachment were “really an assault on the electorate, not just the president.”

4. Whistleblower Likely to Testify to Congress

Rep. Terri Sewell, D-Ala., pressed Maguire on whether the whistleblower would testify to Congress. The director responded several times that he intends to allow the whistleblower to speak to Congress, but that there would be some procedures to comply with, since the person is an employee of the intelligence community.

Maguire responded: “Right now, I’m working through that with the chair and to the best of my ability. I believe the chair is asking to have the whistleblower come forward. I’m working with counsel, with the committee to support that.”

Schiff subsequently interrupted to ask the same question, albeit at greater length.

“Do I have your assurance that once you work out the security clearance for the whistleblower’s counsel, that that whistleblower will be able to relay the full facts within his knowledge concerning wrongdoing by the president or anyone else, that he or she will not be inhibited in what they can tell the committee, that there will not be some kind of minder from the White House or elsewhere sitting next to them, telling them what they can answer and not answer?” Schiff asked. “Do I have your assurance the whistleblower will be able to testify fully and freely, and enjoy the protections of the law?”

Several House members pressed Maguire about why this was the first time an intelligence community whistleblower complaint deemed as an “urgent concern” didn’t go to Congress immediately.

“It does not allow a member of the intelligence community to report any wrongdoing that comes from anywhere in the federal government,” he continued, adding:

This is unprecedented. This has never happened before.

Rep. John Ratcliffe, R-Texas, emphasized that the whistleblower had no firsthand knowledge, only reporting what he or she was told.

He likened it to the Christopher Steele opposition research document from the Hillary Clinton presidential campaign in 2016 that helped prompt the Russia investigation.

“In other words, much like the Steele dossier, the allegations in the whistleblower’s complaints are based on thirdhand, mainstream media sources, instead of firsthand information,” the Texas lawmaker said.

“The transcript is the best evidence of what we have. So that the American people are very clear, what that transcript relates is legal communications,” Ratcliffe later added.

The United States is allowed to solicit help from a foreign government in an ongoing criminal investigation. Which is exactly what the president did in that conversation. So, if the Democrats are intent on impeaching the president for lawful conduct, then, be my guest.

7. Leaker From the White House?

“If somebody is leaking this, then it’s likely coming from the agencies that you oversee,” Nunes said.

Nunes said, “We’ve had the transcript of the Mexican president, the Australian prime minister, and now the contents of a call with the Ukrainian president leak out.”

“Ranking member, the allegation in the whistleblower complaint was that there were about 12 people who listened in on the conversation, members of the National Security Council and others,” Maguire said. “Then others were briefed from the State Department as well, because they have an area responsibility and a region responsibility that they would be informed on the interaction. So, there were a number of people that, from the White House, were briefed on the call.”

Nunes said, “Well, I’m quite sure of this: The White House probably didn’t leak this out.”

Maguire responded, “I wouldn’t say the White House. But there are individuals within the White House that may or may not. I don’t know. But it would not be from an intelligence intercept. I will say that.”

After the hearing, The New York Times reported that a CIA official working in the White House made the complaint.

“It just seems to me that it is unprecedented, and I would like to say, I think that this decision by the president yesterday to release the transcripts of his conversation with the president of the Ukraine was probably unprecedented as well,” Maguire said.