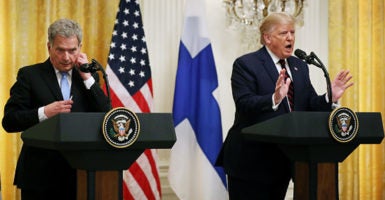 President Donald Trump called the chairman of the House Intelligence Committee a “fraud” while offering rare praise of The New York Times in a contentious White House press conference in which he assailed the news media for dishonesty as Democrats’ impeachment inquiry advances.

Minutes before the president spoke Wednesday, the Times reported that House Intelligence Chairman Adam Schiff’s office coordinated with the whistleblower before he or she filed a complaint about Trump’s July 25 phone call with Ukraine’s president, and helped the CIA employee through the process.

The Times story reads: “The whistle-blower’s decision to offer what amounted to an early warning to the intelligence committee’s Democrats is also sure to thrust Mr. Schiff even more forcefully into the center of the controversy.”

“It shows that Schiff is a fraud,” Trump said of the Times story during his joint press conference with Finnish President Sauli Niinistö. “I hate to say it’s The New York Times. I can’t believe they wrote it. Maybe they’re getting better.”

The whistleblower filed a complaint alleging that Trump pressured Ukrainian President Volodymyr Zelenskyy to investigate former Vice President Joe Biden and his son, Hunter Biden, if he wanted to get military aid from the United States.

The younger Biden reportedly earned more than $50,000 a month for sitting on the board of a Ukrainian natural gas company while his father was vice president.

The White House on Sept. 25 released an official transcript of the call with Ukraine’s president compiled by professionals who listened in, and it did not contain an explicit quid pro quo.

Zelenskyy told reporters at the United Nations last week that Trump did not “push” him on the Biden matter.

No audio recording apparently was made, so it is not clear how close to verbatim the transcript is. But Trump told reporters the White House release was “word for word, comma for comma.”

The Times also reported that Schiff’s Intelligence Committee staff helped guide the whistleblower to a lawyer who worked for Democrats, including the elder Biden, former Secretary of State Hillary Clinton, and Senate Minority Leader Charles Schumer of New York.

Trump jumped to another conclusion that Schiff “helped write” what he called a “vicious” whistleblower complaint.

“I think it’s a scandal that he knew before. I would go a step further. I think he probably helped write it,” Trump said in response to a question. “That’s what the word is. I give a lot of respect to The New York Times for putting it out.”

Trump said he learned of the story as he was on his way to the East Room press conference.

“Just coming up, they handed it to me. … That’s big stuff. That’s a big story,” Trump said. “He knew long before. And he helped write it too.”

Schiff, a fierce critic of Trump, argued in a tweet that there was nothing out of the ordinary.

“When a whistleblower seeks guidance, staff advises them to get counsel and go to an IG,” Schiff tweeted. “That’s what they’re supposed to do. Unlike a president pressing a foreign leader to dig up dirt on a political opponent. That’s not what a president is supposed to do. And we all know it.”

On Aug. 28, before news reports of the whistleblower’s accusation, Schiff tweeted about what seemed to be the content of the complaint.

“Trump is withholding vital military aid to Ukraine, while his personal lawyer seeks help from the Ukraine government to investigate his political opponent,” the Intelligence Committee chairman tweeted. “It doesn’t take a stable genius to see the magnitude of this conflict. Or how destructive it is to our national security.”

Trump, who quipped during the press conference that he has been called a “very stable genius,” has referred to Democrats’ impeachment attempt as a “coup.”

Trump again complained about Schiff’s reading a fictionalized description of the phone call to Ukraine’s Zelenskyy while chairing a House Intelligence Committee hearing last week, making the president sound like a mob boss.

Trump said Schiff “went up to the microphone and read a statement from the president of the United States as if I were on the phone.”

Trump said he thought that should be illegal.

“He should resign. Some people even say it was treason,” Trump said of Schiff.

“To impeach a president over a fraud that was committed by other people that want to win an election in 2020, which they won’t, is incredible,” Trump said.

Citing investigations of his alleged but disproven “collusion” with the Russian government, Trump said, “I’ve been talking about it from the standpoint of bringing a major lawsuit. … We’ve been investigating the corruption having to do with what they did to my people. They destroyed many people.”

The president, who at one point said much of the news media is “corrupt,” didn’t elaborate on what type of lawsuit he would bring, or on what grounds.

Hunter Biden was on the board of an Ukrainian energy company called Burisma, which was under investigation by a Ukrainian state prosecutor.

As vice president in 2016, his father called for the prosecutor to be fired. Joe Biden boasted on camera early last year that he told the Ukrainian government it wouldn’t get $1 billion in U.S. aid if it didn’t sack the prosecutor.

During his opening comments, the Finnish president said he visited museums in Washington and that Americans should continue their democracy.

The unusual comment gained some attention, and Niinistö was asked whether he was concerned America wouldn’t remain a democracy.

“I am impressed by what the American people have gained during these decades, 100 or so years, building up a very impressive democracy,” Niinistö responded. “So, keep it going on.”

Trump jumped in to say:

The United States is a great democracy. I’m airing what I’m airing because we are in fact a democracy. If the press were straight and honest and forthright and tough, we would be a far greater nation. We would be far greater when we don’t have the CNNs of the world, who are corrupt people.

With that, the president left the room.