Trump Offers Middle East Peace Deal: ‘We Have an Obligation to Humanity to Get It Done’ 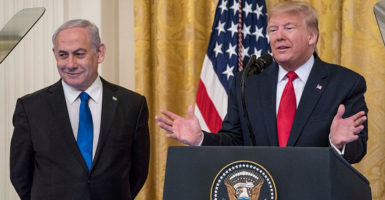 President Donald Trump, rolling out a Middle East peace plan Tuesday, acknowledged that other presidents since the 1960s have tried and failed to reach a lasting deal between Israel and the Palestinians.

“I wasn’t elected to do small things or shy away from big problems,” Trump said to applause in the East Room of the White House, standing beside Israeli Prime Minister Benjamin Netanyahu.

“As I have seen throughout my long career as a dealmaker, complex problems require nuanced, fact-based remedies,” he added.

The Trump administration’s plan would recognize a Palestinian state with a capital in East Jerusalem where the United States would open an embassy, and would “more than double the Palestinian territory,” the president said.

No one will be uprooted from their homes, Trump said, and Israel will need to work closely with Jordan to protect the Temple Mount. The agreement, he said, will require that Palestinians “reject terrorism.”

Palestianian officials have not endorsed the plan, but Trump said the U.S. will promote negotiations.

“We have an obligation to humanity to get it done,” Trump said.

Netanyahu and his chief rival in the Israeli election, Benny Gantz, both visited Trump and endorsed the plan that the president has said would be the “deal of the century.”

“You have been the greatest friend that Israel has ever had in the White House,” Netanyahu said to Trump when he took the podium. “Frankly, though we’ve had some great, outstanding friends in these halls, it’s not even close.”

As the two leaders spoke, drawing repeated applause from the audience, both face removal from office amid intense political challenges—Trump an impeachment trial in the Senate and Netanyahu an indictment in three corruption cases.

Trump referred to the U.S. Embassy having been relocated from Tel Aviv to Jerusalem on his watch.

“Under this vision, Jerusalem will remain Israel’s undivided—very important—undivided capital,” Trump said. “But that’s no big deal, because I’ve already done that for you, right?”

Trump said he wants a strong deal for the Palestinians.

“Our vision will deliver massive commercial investment of $50 billion into the new Palestinian state,” Trump said.

One million jobs would be created for the Palestinians and their poverty rate would be cut in half, the president said.

“I was saddened by the fate of the Palestinian people. They deserve a far better life,” Trump said. “They deserve the chance to achieve their extraordinary potential.”

“This is the first time Israel has authorized the release of a conceptual map illustrating the territorial compromises it’s willing to make,” the president said.

“You recognize that Israel must have sovereignty in places that enable Israel to defend itself by itself,” Netanyahu said. “For too long, far too long, the land of Israel where our patriarchs prayed, our prophets preached, and our kings ruled has been outrageously branded as an illegally occupied territory.”

“Well, today, Mr. President, you are puncturing this big lie.”