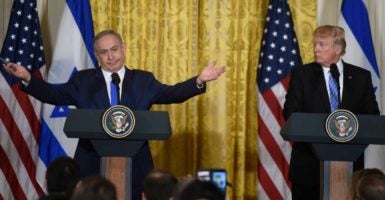 President Donald Trump and Israeli Prime Minister Benjamin Netanyahu hold a joint press conference at the White House where they talked about settlements and the Middle East peace process, among other matters. (Photo: Riccardo Savi/Sipa USA/Newscom)

“It might be a bigger and better deal than people in this room even understand,” @POTUS says.

“As far as settlements, I’d like to see you hold back on settlements for a little bit,” Trump said to Netanyahu in reference to a potential deal with Palestine.

“We’ll work something out, but I would like to see a deal be made, I think a deal will be made,” Trump said.

In December, the United Nations Security Council adopted a resolution, which the Obama administration abstained from, to condemn Israel for settlements in East Jerusalem and the West Bank.

“Smart man, great negotiator, and I think we’re going to make a deal,” Trump said of Netanyahu regarding a potential agreement with Palestinians. “It might be a bigger and better deal than people in this room even understand. That’s a possibility so let’s see what we do.”

Netanyahu said there are bigger issues than settlements.

“I believe that the issue of the settlements is not the core of the conflict, nor does it really drive the conflict,” the prime minister said. “I think it’s an issue that has to be resolved in the context of peace negotiations.”

“Today’s joint news conference is not a reset, but a catalytic move forward for the U.S. and Israel,” Roman said in a public statement.

In a departure from previous U.S. policy, Trump said he is not exclusively committed to a two-state solution in peace negotiations between Israel and the Palestinians—but rather to what will work.

“I’m looking at [a] two-state [solution] and one-state [solution] and I like the one that both parties like,” the president said. “I’m very happy with the one that both parties like. I can live with either one. I thought for a while the two-state looked like it may be the easier of the two but honestly, if Bibi and if the Palestinians—if Israel and the Palestinians are happy, I’m happy with the one they like the best.”

Netanyahu said he is more interested in what a Palestinian state would be, asserting it can’t be another terror state that will attack Israel.

I told you what are the conditions that I believe are necessary for an agreement. It’s the recognition of the Jewish state and Israel’s security control of the entire area. Otherwise, we’re just fantasizing. Otherwise, we’ll get another failed state, another terrorist Islamist dictatorship that will not work for peace, but work to destroy us, but also destroy any hope for a peaceful future for our people.

Trump’s potential departure from a two-state solution was refreshing for Mathew Staver, president of Christians in Defense of Israel.

“Since [President] Lyndon Johnson, Republican and Democratic presidents have tried to impose a two-state solution on Israel as a means to achieving peace,” Staver said in a public statement. “But dividing land will not bring peace. The 1993 Oslo Accords only served to give birth to a terrorist government in the Palestinian Authority, which opened the door for Hamas ruling in Gaza.”

“Neither the Palestinian Authority nor Hamas want peace,” Staver continued. “They want to rename the entire land to Palestine and they do not want any Jews. When they do not recognize Israel’s right to exist and pledge in their constitutions to wipe out Israel and the Jewish people, a mere parcel of land here or there will not bring peace. I urge President Trump to keep his promise to move the U.S. Embassy to Jerusalem, the undivided capital of Israel.”

Trump also seemed noncommittal on the timeline for moving the U.S. Embassy from Tel Aviv to Jerusalem.

One day after Trump’s national security adviser Michael Flynn resigned after revelations he talked about sanctions relief with the Russian ambassador in December, Trump addressed the matter.

“Gen. Flynn is a wonderful man. I think he’s been treated very, very unfairly by the media, as I call it, the fake media, in many cases and I think it’s really a sad thing that he was treated so badly,” Trump said.

On Tuesday, White House press secretary Sean Spicer said Flynn misled Vice President Mike Pence by telling him there was no discussion of sanctions relief for Russia with the Russian ambassador during December before Flynn or the rest of the administration was in office. Pence then defended Flynn on national TV based on this information. Spicer said Trump asked Flynn to resign because of an “evolving and eroding level of trust.”

However, on Wednesday, Trump blasted what he characterized as politicized intelligence leaks.

“It’s a criminal act and it’s been going on for a long time before me but now it’s really going on. People are trying to cover up for a terrible loss that the Democrats had under Hillary Clinton,” Trump said of the information leaks. “I think it’s very, very unfair what’s happened to Gen. Flynn, the way he was treated and the documents and papers that were illegally—I stress that—illegally leaked.”

While both Trump and Netanyahu said they wanted to block Iran from getting a nuclear weapon, it was notable how little they talked about it during the press conference, said Jim Phillips, senior research fellow for Middle Eastern affairs at The Heritage Foundation.

“Both took a hard line against Iran but said very little publicly about the Iran nuclear agreement, which must have been a major topic for private discussion,” Phillips told The Daily Signal in an email. “The two leaders probably spent considerable time in hashing out a coordinated strategy for dealing with Iran in the future.”