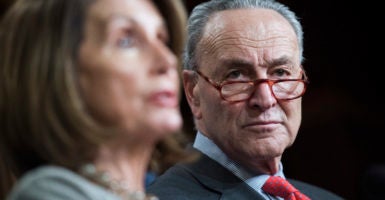 Impeachment is supposed to be a serious, deliberative process, but the Trump impeachment has been anything but. Fox News legal analyst Gregg Jarrett has a new book in which he unpacks the effort to catch President Donald Trump by any means. Listen to the podcast or read a lightly edited transcript below.

Virginia Allen: I’m joined on The Daily Signal Podcast by Gregg Jarrett, Fox News legal analyst and New York Times bestselling author. Gregg, thank you so much for joining me.

Gregg Jarrett: My pleasure to be here.

Allen: Now, you’ve been very vocal about the left’s constant attacks on President [Donald] Trump. You actually wrote a book titled “Witch Hunt,” which we’ll address in just a moment here, but why do you think that the left has been so vehemently against President Trump since even before he was elected?

Jarrett: Hatred and blinding bias that has driven them to accuse him of the most noxious crime imaginable, a treasonous conspiracy with Russia, that proved to be nothing more than a hoax knocked down by the Mueller report, and even further evidence of it in the inspector general’s report. It has been driving the impeachment of the president.

And it was very revealing that House Speaker Nancy Pelosi said recently, in a forum caught on videotape, that she’d been trying to do this for two and a half years.

That tells you everything you need to know. They didn’t care whether they had a valid reason or not. They were determined to undo the election result, damage Trump’s presidency, and drive him from office by hook or by crook. They chose the latter.

Allen: So, now, the president has been impeached by the House. What are those key differences, though, between the impeachment of President Bill Clinton and President Andrew Johnson, and now what we’re seeing with President Donald Trump?

Jarrett: Look, in the Bill Clinton case, the most recent one in 1998-’99, there was an extensive investigation by an independent counsel by the name of Ken Starr, went on for two years. He interviewed hundreds of witnesses, examined millions of documents. He identified 11 felony offenses by President Bill Clinton.

Here, in the case of Donald Trump, there are no felony offenses identified, there are no misdemeanors identified. Read through the articles of impeachment. There are no crimes stated. And this wasn’t an exhaustive investigation by an independent counsel, no. This was a largely secret process by [Rep.] Adam Schiff and the House over the course of several weeks. And his only witnesses were offering opinion, speculation, and multiple hearsay.

There was only one fact witness who actually spoke to Donald Trump who recounted how the president said, “I want nothing. I want no quid pro quo.” So, there’s no direct evidence that the president did anything wrong that constitutes an impeachable offense.

This is rage instead of reason. There is no clear and convincing evidence, which is the impeachment standard.

This is exactly what the Framers of our Constitution feared, that the impeachment clause would be weaponized for partisan purposes. They feared that an opposing party who disliked a particular president would seek to impeach him for purely political reasons. And that’s what’s happened.

Allen: Are you worried about the future? I mean, now that we have seen impeachment be used as this political weapon, do you think it’s likely that this is going to be a pattern that we see in future generations?

Jarrett: Absolutely. This is a dangerous new standard. Every perceived slight or misconduct by a president will now be immediately branded an impeachable offense, because Democrats in the House, Speaker Nancy Pelosi in particular, has set the standard so low that anything is impeachable.

When you read Article 1 [of] impeachment, it’s entitled “Abuse of Power,” which is this wonderfully amorphous phrase that can mean anything. It’s found nowhere in the Constitution, and it’s exactly what the Framers rejected.

There was great debate and consideration to use the term “maladministration” during the Constitutional Convention as a vehicle for impeachment. It was debated and deliberately rejected, because the Framers—and you can read the debate as it’s recounted—said it’s too vague. It’s too ambiguous. It could mean anything, and it would be used as a political cudgel by an opposing party, so they rejected it.

And they arrived at a pretty clear standard: Treason, bribery, high crimes, and misdemeanors—stated nowhere in these articles of impeachment against Trump.

Allen: Let’s talk for a moment about your book, “Witch Hunt: The Story of the Greatest Mass Delusion in American Political History.” Why did you decide to write the book?

Jarrett: Well, I wrote the first book, it came out a year and a half ago, called “The Russia Hoax.” And it told the story of how powerful, unelected officials operating in the shadows of secrecy created the greatest mass delusion in American political history.

But since that book came out, a wealth of new information and evidence has emerged from the original inspector general’s report. Now, the second inspector general’s report, Robert Mueller’s report. We received the redacted FISA warrant applications to spy. The story of Rod Rosenstein’s attempted coup to recruit Cabinet members to evict the president.

All of this came to light. And so, it deserved another book that was updated with more information.

Allen: When you think about sitting down with your grandchildren or future generations in years to come and talking about this time in history, what would you want them to know?

Jarrett: Well, I would want them to know that this was a period in American history where democracy was at the precipice, where a group of people decided that they didn’t like the electoral results, and sought to undo those results, and to drive a duly elected president from office. And that the people became outraged over it and stopped it. And that, in the end, justice prevailed.

The only remedy for a lie is the truth. And the only cure for lawlessness is justice. And I think you see now, first with the inspector general report and the attorney general, William Barr, and his U.S. attorney, John Durham, that they are dedicated to getting to the bottom of the Russia hoax.

How did, and why did, the FBI launch its investigation without any credible evidence? Why did they lie to a FISA court to spy on the Trump campaign and deceive them, concealing exculpatory evidence? I think Barr and Durham are looking into this, and I feel fairly confident that, in the end, the reckoning awaits, and people will be held accountable.

Allen: They say that history repeats itself. What would you want to tell the next generation … [so] that we don’t repeat these mistakes that we’ve made?

Jarrett: Don’t always trust your government, that they’re doing the right thing. Government is only as good as the people in government serving the public’s need. And they are susceptible to the same human frailties that afflict all of us.

They don’t just make mistakes, but some of them act out of malice. And the people that we entrust to uphold the law, in this particular case, broke the law, in my judgment. And so, don’t automatically assume that the government is acting honestly. And we must always remain vigilant in a democracy.

Allen: Gregg, we really appreciate your constant legal analysis on Fox and the work that you’re doing. How can our listeners follow your work, find out more about your books?

Jarrett: Well, my latest book, “Witch Hunt: The Story of the Greatest Mass Delusion in American Political History” is available in bookstores everywhere. You can buy it online, Amazon.com, Barnesandnoble.com.

I write weekly columns, sometimes two or three or four columns a week, for FoxNews.com. You can also check out my website, thegreggjarrett.com. Check out Twitter @GreggJarrett. So, there’s lots of ways to communicate and follow what I do.

Allen: Great. Thank you so much for your time today, we really appreciate it.

Jarrett: My pleasure. Thanks.

Note: This transcript was edited after initial publication.