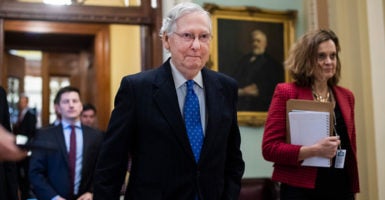 House Majority Leader Steny Hoyer announced late Thursday afternoon that no more House votes will be taken until after Jan. 7.

That means House managers, or prosecutors, won’t be selected until at least then to deliver articles of impeachment to the Senate for commencement of the trial.

Sending the latest ripple in the divisive Washington drama, House Speaker Nancy Pelosi had suggested she would delay the start of a trial by not transmitting the two articles of impeachment—the charges against Trump—to the Senate.

The theory among some Democrats is that Senate Republicans want to get the impeachment trial out of the way, and will make concessions in setting rules for it.

Under the rules of the Senate, an impeachment trial may begin only after the House managers deliver the articles of impeachment. Pelosi, D-Calif., said she wouldn’t select House managers until she had a better idea about the parameters of the trial.

Senate Majority Leader Mitch McConnell, R-Ky., has said his role is not as an impartial juror, and he views the impeachment of Trump as illegitimate. He mocked the Democrats’ reluctance for a trial in a tweet Thursday.

“Last night, House Democrats passed the thinnest, weakest presidential impeachment in American history,” McConnell tweeted. “Now they’re suggesting they are too afraid to even submit their accusations to the Senate and go to trial. The prosecutors are getting cold feet in front of the entire country.”

Others in House Democratic leadership appear to be on board behind Pelosi, or to go further.

Majority Whip James Clyburn of South Carolina, the No. 3 House Democrat, told CNN that Democrats should hold the articles of impeachment for “as long as it takes.”

“Why would the speaker of the House step into that without trying to determine exactly what the majority leader plans to do?” he said.

The House voted Wednesday night to impeach Trump for abuse of power and obstruction of Congress in connection with his July 25 phone conversation with Ukrainian President Volodymyr Zelenskyy that broached the topics of both former Vice President Joe Biden and his son Hunter Biden’s high-paying job with Ukraine energy company Burisma.

Asked by a reporter if he were suggesting that “it’s possible you will never transmit the articles of impeachment?” Clyburn responded: “If it were me, yes, that’s what I’m saying. I have no idea what the speaker will do.”

This would be an unusual move, based on historical precedent, said Thomas Jipping, a former chief counsel to the Senate Judiciary Committee who was involved in two Senate impeachment trials of federal judges.

“In most other impeachments of judges, the trial started in a week or two,” Jipping, now deputy director of the Meese Center for Legal and Judicial Studies at The Heritage Foundation, told The Daily Signal.

“The Senate has the sole power to try an impeachment under the Constitution,” Jipping added. “The House is trying to manipulate when the Senate begins the trial. This is completely different than anything ever done before.”

Notably, in the previous two presidential impeachments, the same party controlled both the House and Senate. In this case, a Republican-controlled Senate will try the impeachment charges approved by a Democrat-controlled House.

“If Democrats are willing to delay the trial, why did they rush impeachment through the Senate?” asked Curt Levey, president of the Committee for Justice, a conservative political group. “The political cost would seem to be for Democrats if they needlessly delay this.”

That said, Levey suggested, it’s entirely a political matter and no one could force the House to transmit the two articles of impeachment in a timely manner.

“It is hard to imagine a court getting involved,” said Levey, a constitutional lawyer, adding:

It’s a political question. … Democrats are fond of saying that Trump violates democratic norms. But, impeaching a president over disagreements with the legislative branch and playing games with the Senate over impeachment also violates norms.

“It creates a constitutional extortion mechanism that is dangerous for the country,” Graham tweeted.

The House impeachment managers, or prosecution team, will be House Democrats, if precedent is a guide. Most likely, they will include House Intelligence Chairman Adam Schiff, D-Calif., and House Judiciary Chairman Jerry Nadler, D-N.Y., among others.

Sitting Thursday afternoon in the Oval Office beside Rep. Jeff Van Drew of New Jersey, who decided in recent days to flip from being a Democrat opposed to impeachment to being a Republican opposed to it, Trump took a question from the press pool about his strategy for the Senate trial.

“We think what they [House Democrats] did is wrong,” Trump said of the impeachment votes. “We think that what they did is unconstitutional, and the Senate is very, very capable. We have great senators, great Republican senators.”

The president added that Cipollone, the White House counsel, is “doing a great job.”

Asked if he would be the main lawyer, Trump said: “It looks that way. Pat Cipollone. We have a couple of others that we are going to put in, but Pat’s been fantastic as White House counsel.”

Trump reportedly is also considering House allies such as Reps. Jim Jordan, R-Ohio, and John Ratcliffe, R-Texas, to assist during the Senate trial.