One Time Congress Tried to Prevent a President From Firing Someone, It Ended in Impeachment 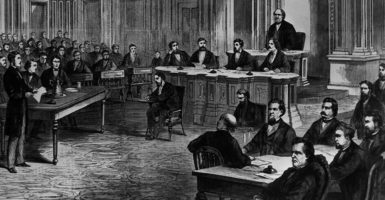 Members of the U.S. Senate and curious onlookers attend the opening of the trial of President Andrew Johnson in 1868. The House impeached him for firing the secretary of war without consulting the Senate in violation of a new law. (Photo: Senate Historical Office/KRT/Newscom)

“High crimes and/or misdemeanors is entirely up to Congress. They can decide that spitting on the sidewalk constitutes a high crime,” @LarrySchweikart says.

If the special counsel’s investigation of Russian meddling in the 2016 election and alleged collusion with the Trump campaign comes during a toxic political climate, the situation was far more polarized after the Civil War.

Some of his Democrat opponents accuse President Donald Trump of trying to obstruct Mueller’s investigation, but more than 150 years ago, President Andrew Johnson faced his own fierce enemies.

The bipartisan bill, which cleared the Senate Judiciary Committee on Thursday by a vote of 14-7, states that the Justice Department may fire a special counsel only for “good cause” and allows a removed special counsel to make an “expedited” appeal in court.

The Special Counsel Independence and Integrity Act, however, may never reach a vote on the Senate floor.

In 1867, both major political parties had their own vision of how Reconstruction should take place in the South after the Civil War.

This prompted the Republican-controlled Congress to pass the Tenure of Office Act to require Johnson to seek the Senate’s approval before ousting any appointee confirmed by that chamber.

Republicans used the tenure law as justification for impeaching Johnson and trying to remove him from the presidency.

Parallels are evident between the current legislation to protect special counsels and the law that led to Johnson’s impeachment, Maryland lawyer David O. Stewart says.

“There is the basic question about whether you can restrict a president from firing an executive branch employee,” Stewart told The Daily Signal.

Stewart represented U.S. District Judge Walter L. Nixon of Mississippi in his 1989 impeachment trial over charges of perjury. The House voted to impeach Nixon, and the Senate removed him after holding the trial.

Stewart, also a historian, is the author of the 2009 book “Impeached: The Trial of President Andrew Johnson and the Fight for Lincoln’s Legacy.”

More than two-thirds of Americans, 71 percent, agree that Trump likely will fire Mueller, according to a recent Fox News poll.

The bill to protect Mueller would not place an outright ban on presidential firing of an executive branch employee, and thus is constitutional, said Curt Levey, president of the Committee for Justice, a conservative legal group.

“I really don’t see a parallel between this bill and the [1867] tenure of office law, because it doesn’t stop Trump from firing Mueller, who is an executive branch employee,” Levey told The Daily Signal. “If it did, it would be unconstitutional. Congress can set up a path for appeals.”

A Pretext for Impeachment, or High Crimes and Misdemeanors?

Johnson, a southerner and a Democrat, became Abraham Lincoln’s second vice president when he ran with the Republican president on a unity ticket in 1864. Johnson ascended to the presidency upon Lincoln’s assassination in April 1865.

The Tennessean sought a far less punitive path for the defeated Confederate states to be fully readmitted into the union than did the “radical” Republican majority in Congress. Johnson also repeatedly vetoed Republican legislation to defend the civil rights of freed slaves in the South.

While the nation’s first impeachment of a president was rooted in deep political divisions, it also was based on technical legal grounds.

Congress overrode Johnson’s veto of the Tenure of Office Act, largely as a way to control implementation of Reconstruction policy.

However, in February 1868, Johnson fired War Secretary Edwin Stanton, a Lincoln appointee, without Senate approval in violation of the new law.

This was all the justification House Republicans needed to impeach Johnson. The House approved 11 articles of impeachment, most for the firing of Stanton.

Article 11 charged Johnson with failure to faithfully execute the laws of the United States because he had declared in an 1866 speech that the 39th Congress was not constitutional and didn’t have the power to propose a constitutional amendment.

After a trial that began March 5 and concluded on May 16, 1868, the Senate acquitted Johnson by falling one vote short of the needed two-thirds majority to convict and remove him.

“Profiles in Courage,” a book written by John F. Kennedy before he was elected president, praised Sen. Edmund G. Ross, R-Kan., as a political hero for casting the vote that saved Johnson’s presidency. Other historical accounts concurred.

However, Stewart, whose book “Impeached” is about the Johnson impeachment, argued that it was justified.

“There was no Supreme Court opinion at the time of the impeachment, so the impeachment for violating a statute was entirely legitimate,” Stewart told The Daily Signal.

Stewart said of Johnson: “He was a terrible president, and there were grounds for removal.”

The Tenure of Office Act was in effect and Johnson’s firing of Stanton “was a deliberate act violating a congressional law” that warranted impeachment and removal, according to historian Larry Schweikart, whose most recent book is last year’s “The Politically Incorrect Guide to the Presidents.”

“Johnson thought the act was illegal. He may have been right,” Schweikart told The Daily Signal. “But that wasn’t the way to do it. So he clearly was in violation of the high crimes and misdemeanors clause of the Constitution, and he wanted to be. He wanted a showdown on the law.”

Democratic leadership on the Hill has been less eager than many rank-and-file members to embrace the idea of impeachment. However, Sens. Kamala Harris, D-Calif.; Elizabeth Warren, D-Mass.; and Kirsten Gillibrand, D-N.Y., are among those who have said that Trump’s firing of the special counsel would warrant impeachment.

But the Senate legislation to protect Mueller interferes with the president’s constitutional authority to enforce the law, said Hans von Spakovsky, a senior legal fellow at The Heritage Foundation.

“It’s a completely accurate comparison,” von Spakovsky told The Daily Signal, referring to the Senate bill and the Tenure of Office Act that the Supreme Court ruled unconstitutional in 1926.

“If Lindsey Graham or anyone else wants to impeach the president over firing Mueller, they would be just as wrong as the Republicans that impeached Johnson,” von Spakovsky, a former Justice Department lawyer, said. “They would be on the wrong side of history.”

Based on what is known now, Stewart said, “nobody serious” believes Trump should be impeached.

An actual crime should be required as grounds to impeach and remove a president, the lawyer said.

The Republican-led House was “hysterical,” Stewart said, when it impeached President Bill Clinton in 1998 for perjury and obstruction of justice. The Senate later acquitted Clinton.

“Impeachment should be conducted in sorrow, rather than enthusiasm,” Stewart said. “Trump triggers emotions. A lot of people feel embarrassed to have him as president. But those are thin grounds. We have a long way to go before there is crime for impeachment.”

Schweikart, a retired professor of history at the University of Dayton, said that as the law stands now, firing Mueller or most other executive branch appointees is not an impeachable offense for a president.

“A president has the authority to fire any special counsel or prosecutor. Period. That is not a high crime or misdemeanor,” Schweikart said. “However, remember that the definition of high crimes and/or misdemeanors is entirely up to Congress. They can decide that spitting on the sidewalk constitutes a high crime.”

“The Senate in each case went beyond its authority to determine guilt or innocence and took on itself the House’s power to determine if the offense reached the level of an impeachable offense,” Schweikart said. “In both cases they ruled it did not.”

“So there are no comparables here to Trump in any way, shape, or form,” he said, “except that if the Democrats get the House they will define anything Trump does as a high crime or misdemeanor.”

The White House didn’t respond to an inquiry from The Daily Signal seeking comment on the Judiciary Committee’s approval of the bill.

With regard to the law that led to Johnson’s impeachment, Congress actually repealed the Tenure of Office Act long before the Supreme Court got involved. It was 1887 and Grover Cleveland, a Democrat, was president.

However, the broader issue persisted. In 1920, President Woodrow Wilson, a Democrat, fired Frank S. Myers, a postmaster in Portland, Oregon. Myers challenged the firing based on a similar law requiring Senate approval to oust postmasters—once a high-level political job.

Wilson was out of office when the high court decided the case of Myers v. United States in 1926.

Taft, the chief justice, wrote that the Constitution is specific about advice and consent from the Senate in confirming executive nominees, but says nothing about the role of Congress in removing them. In finding the law protecting postmasters to be unconstitutional, the opinion also noted the already-repealed Tenure of Office Act was invalid.

Senate Judiciary Chairman Charles Grassley, R-Iowa, and a few other committee Republicans voted with Democrats for the bill to protect Mueller.

If passed, the legislation also would apply to future special counsels. It would require a president to have “good cause” to remove a special counsel and provide a fired special counsel with a 10-day window to seek expedited judicial review.

If the courts ultimately determined the firing violated the “good cause” requirement, it would not take effect. The measure also would preserve staffing, documents, and materials of an investigation while the matter was pending.