The Pros and Cons of 3 Possible Budget Outcomes 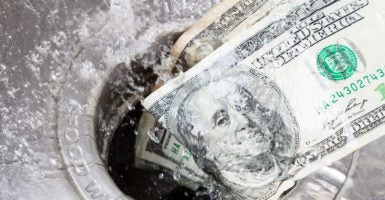 Congress eventually funds the government from one self-manufactured “crisis” to the next, leaving taxpayers to hold the bill for lawmakers’ irresponsible ways. (Photo: Stock/Getty Images)

Just over a week away from the next deadline for fiscal year 2020 appropriations, Congress still has not passed a single spending bill.

If Americans are feeling a strange sense of déjà vu, it is because the current spending uncertainty has played out time and time again.

The federal government is already on its second continuing resolution of fiscal 2020, which began Oct. 1. Last year, a similar funding deadline approached just days before Christmas. That battle resulted in the longest funding lapse in federal government history.

By raising discretionary spending limits for fiscal 2020-2021, the irresponsible Bipartisan Budget Act of 2019 was supposed to make Congress’ work easier. Yet four and a half months after the act became law, the appropriations process remains stalled.

The bottom line is that Congress does not actively engage in the budget and spending process. Congress eventually funds the government from one self-manufactured “crisis” to the next, leaving taxpayers to hold the bill for lawmakers’ irresponsible ways.

Although what will happen between now and Dec. 20 isn’t clear, here are three possible outcomes and their impacts.

1. Congress passes full-year funding for the federal government at the Bipartisan Budget Act of 2019 levels.

Pro: Enacting full-year funding is particularly important for the Department of Defense. Because of the long-term nature of defense spending, being able to plan ahead is critical for large-scale defense projects and ensures the Pentagon’s ability to keep Americans safe. Adopting full-year funding also would give the military $19.5 billion in additional resources.

Con: Adopting full-year funding bill at the Bipartisan Budget Act of 2019 levels would bust the original Budget Control Act of 2011 caps by $169 billion. According to the Congressional Budget Office, in just the first two months of fiscal year 2020, the deficit already has risen to $342 billion, 12% ahead of this time last year.

Congress should prioritize constitutional responsibilities, like national defense, without putting the country further into debt.

A massive preholiday omnibus bill also likely would contain a veritable Christmas tree of extraneous policy add-ons that would be unable to win passage on their own merits.

2. Congress passes a short-term continuing resolution and puts off funding decisions until next year.

Pro: The advantage of passing a short-term continuing resolution is that it allows for spending negotiations to continue. It also allows lawmakers to avoid a government shutdown, which is a political advantage but not a policy victory.

In terms of policy, a short-term continuing resolution would delay, at least temporarily, the appropriation of the higher spending levels in the Bipartisan Budget Act of 2019.

Con: Several problems accompany a short-term continuing resolution. First, it sets up another funding deadline in the New Year. It also means continued uncertainty for agencies. Short-term continuing resolutions are particularly harmful for national defense because they decrease funding predictability and squander needed time for training, maintenance, and development.

Moreover, the longer Congress puts off finalizing fiscal 2020 funding, the more likely it becomes that this dysfunctional process will repeat itself for fiscal 2021. Congress didn’t finalize fiscal 2019 appropriations until mid-February. This led to delay in steps of this year’s budget process and contributed to the lack of progress on appropriations bills.

Pro: Passing a full-year continuing resolution would maintain the status quo. That means that there would be no new policy provisions and the spending increases enacted by the Bipartisan Budget Act of 2019 would not take effect, allowing the federal government a potential savings of $44 billion in fiscal 2020.

Con: This is not an ideal outcome for the Defense Department, but much less destructive than more short-term continuing resolutions or a government shutdown. It would mean that the department receives almost $20 billion less than it expected to in fiscal 2020. However, funding anomalies would allow for adjustment to the current spending levels and could make up for some of the lost funding.

None of these outcomes are ideal for taxpayers. Each would continue the cycle of wasteful spending and do nothing to make sure that Congress actually follows the budget process in the future.

A better approach would be for Congress to acknowledge it has a spending addiction and begin to prioritize resources carefully.

The Bipartisan Budget Act of 2019 increased spending by $169 billion in fiscal 2020. That increase is a ceiling, not a floor.

Congress should fund defense and other truly national priorities appropriately while cutting wasteful and inappropriate programs in other areas of the budget.

To encourage lawmakers to engage actively in the budget process every year, Congress should pursue reforms that compel members to do so.

Sens. James Lankford, R-Okla., and Maggie Hassan, D-N.H., introduced a bill earlier this year that could help the budget and appropriations process function more effectively. Specifically, it includes the No Budget, No Pay Act proposed by Sens. Mike Braun, R-Ind., and Rick Scott, R-Fla., which would withhold lawmakers’ pay if Congress fails to pass a budget and meet appropriations deadlines.

The current spending impasse is a symptom of a dysfunctional Congress. America is facing trillion-dollar deficits for at least the next 10 years.

No matter what happens in the next 10 days, lawmakers must get serious about reducing spending and creating a more accountable budget process.